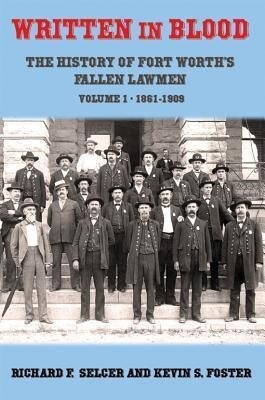 von Richard F. Selcer, Kevin S. Foster
New. Sprache: Englisch.
Buch (gebunden)
"Another line of duty death" is a chilling headline that serves as an obituary for too many "first responders." In 2002 Fort Worth joined the ranks of other communities across the nation in building a memorial to its fallen heroes, an elaborate, mill … weiterlesen
Geschenk per Mail versenden
Buch (gebunden)

"Another line of duty death" is a chilling headline that serves as an obituary for too many "first responders." In 2002 Fort Worth joined the ranks of other communities across the nation in building a memorial to its fallen heroes, an elaborate, million-dollar Police and Firefighters Memorial, dedicated in 2009, that recognized fifty-eight policemen going back to the city's beginnings. "Written in Blood" is a more inclusive version of that idea because it covers more than just members of the Police Department; it is about the men from all branches of local law enforcement who died defending law and order in the early years: policemen, sheriffs, constables, "special officers," and even a police commissioner. All were larger-than-life characters who took an oath to "preserve and protect" and therefore deserve to be remembered.Richard F. Selcer and Kevin S. Foster tell the stories of thirteen of those early lawmen, starting with Tarrant County Sheriff John B. York in 1861 and going through Fort Worth Police Officer William "Ad" Campbell in 1909. York died in a street fight; Campbell was shot-gunned in the back while walking his beat in Hell's Half-Acre. This is also the story of law enforcement in the days when an assortment of policemen and marshals, sheriffs and deputies, and special officers and constables held the line and sometimes crossed over it.Co-authors Selcer and Foster bring academic credentials and "street cred" to the story, explaining how policemen got (and kept) their jobs, what "special officers" were, and the working relationship between the city marshal's boys and the sheriff's boys. The book is also a primer on court proceedings in the old days as it follows accused cop killers through the justice system. In some instances, the court cases were as fantastic as the crime itself. Each victim's and perpetrator's story is fleshed out with the details of his life, ultimate fate, and in some cases his descendants."Written in Blood" is not a paean to these thirteen men. They were not saints; they were real flesh-and-blood men: violent, sometimes racist, often carrying a chip on their shoulder. Most of them would not meet the strict professional standards required of officers today. None of the thirteen has ever had their full story told before now. They were men on the front lines of law enforcement at a time when the job did not come with health insurance or a retirement package. Selcer and Foster show the real men behind the badges, warts and all, leaving it to the reader to judge each officer's place in history.

RICHARD F. SELCER is the author of "Fort Worth Characters" (UNT Press) and "Hell's Half-Acre: The Life and Legend of a Red-Light District," and coauthor of "Legendary Watering Holes: The Saloons that Made Texas Famous." He is a long-time adjunct professor at Tarrant County College and the International University in Vienna, and resides in Fort Worth.KEVIN S. FOSTER has been a Fort Worth police officer for 29 years and a sergeant for more than 21 years. A founding member of the Fort Worth Police Historical Association, he is also the research director and chairman of the Fort Worth Police and Firefighters Memorial committee. He lives in Weatherford, Texas.