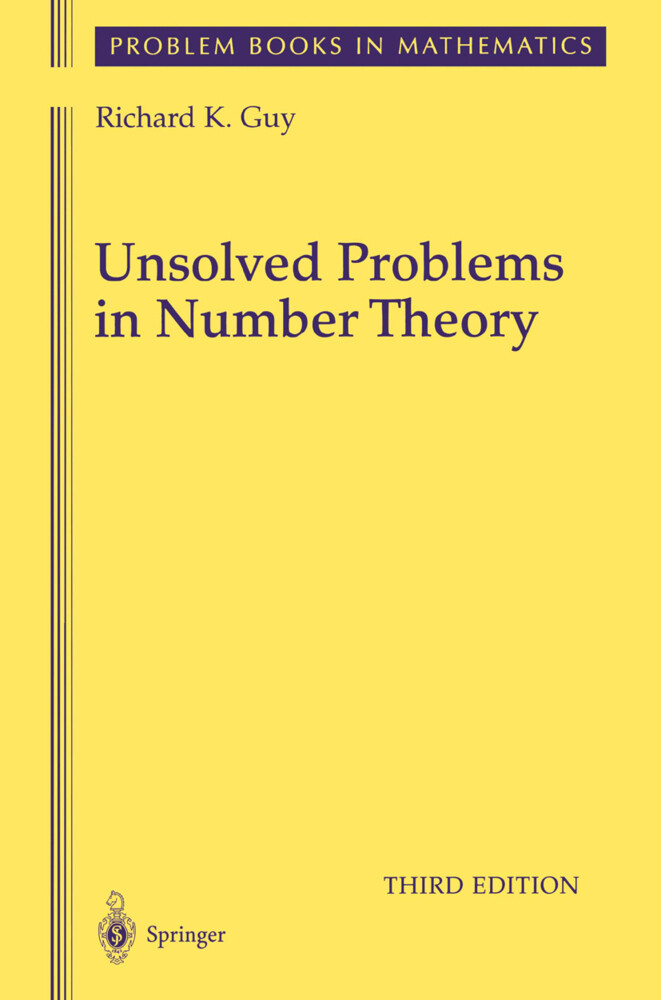 Mathematics is kept alive by the appearance of new unsolved problems, problems posed from within mathematics itself, and also from the increasing number of disciplines where mathematics is applied. This book provides a steady supply of easily understood, if not easily solved, problems which can be considered in varying depths by mathematicians at all levels of mathematical maturity.For this new edition, the author has included new problems on symmetric and asymmetric primes, sums of higher powers, Diophantine m-tuples, and Conway's RATS and palindromes. The author has also included a useful new feature at the end of several of the sections: lists of references to OEIS, Neil Sloane's Online Encyclopedia of Integer Sequences.About the first Edition:"...many talented young mathematicians will write their first papers starting out from problems found in this book." András Sárközi, MathSciNet

Preface to the First Edition
Preface to the Second Edition
Preface to the Third Edition
Glossary of Symbols
A. Prime Numbers.
A1. Prime values of quadratic functions.
A2. Primes connected with factorials.
A3. Mersenne primes. Repunits. Fermat numbers. Primes of shape k · 2n + 1.
A4. The prime number race.
A5. Arithmetic progressions of primes.
A6. Consecutive primes in A.P.
A7. Cunningham chains.
A8. Gaps between primes. Twin primes.
A9. Patterns of primes.
A10. Gilbreath's conjecture.
A11. Increasing and decreasing gaps.
A12. Pseudoprimes. Euler pseudoprimes. Strong pseudoprimes.
A13. Carmichael numbers.
A14. 'Good' primes and the prime number graph.
A15. Congruent products of consecutive numbers.
A16. Gaussian primes. Eisenstein-Jacobi primes.
A17. Formulas for primes.
A18. The Erd os-Selfridge classi.cation of primes.
A19. Values of n making n - 2k prime. Odd numbers not of the form ±pa ± 2b.
A20. Symmetric and asymmetric primes. B. Divisibility
B1. Perfect numbers.
B2. Almost perfect, quasi-perfect, pseudoperfect, harmonic, weird, multiperfect and hyperperfect numbers.
B3. Unitary perfect numbers.
B4. Amicable numbers.
B5. Quasi-amicable or betrothed numbers.
B6. Aliquot sequences.
B7. Aliquot cycles. Sociable numbers.
B8. Unitary aliquot sequences.
B9. Superperfect numbers.
B10. Untouchable numbers.
B11. Solutions of mó(m) = nó(n).
B12. Analogs with d(n), ók(n).
B13. Solutions of ó(n) = ó(n + 1).
B14. Some irrational series.
B15. Solutions of ó(q) + ó(r) = ó(q + r).
B16. Powerful numbers. Squarefree numbers.
B17. Exponential-perfect numbers
B18. Solutions of d(n) = d(n + 1).
B19. (m, n + 1) and (m+1, n) with same set of prime factors. The abc-conjecture. B20. Cullen and Woodallnumbers.
B21. k · 2n + 1 composite for all n.
B22. Factorial n as the product of n large factors.
B23. Equal products of factorials.
B24. The largest set with no member dividing two others.
B25. Equal sums of geometric progressions with prime ratios.
B26. Densest set with no l pairwise coprime.
B27. The number of prime factors of n + k which don't divide n + i, 0 ¡Ü i < k.
B28. Consecutive numbers with distinct prime factors.
B29. Is x determined by the prime divisors of x + 1, x + 2,. . ., x + k?
B30. A small set whose product is square.
B31. Binomial coeffcients.
B32. Grimm's conjecture.
B33. Largest divisor of a binomial coeffcient.
B34. If there's an i such that n - i divides _nk_.
B35. Products of consecutive numbers with the same prime factors.
B36. Euler's totient function.
B37. Does ö(n) properly divide n - 1?
B38. Solutions of ö(m) = ó(n).
B39. Carmichael's conjecture.
B40. Gaps between totatives.
B41. Iterations of ö and ó.
B42. Behavior of ö(ó(n)) and ó(ö(n)).
B43. Alternating sums of factorials.
B44. Sums of factorials.
B45. Euler numbers.
B46. The largest prime factor of n.
B47. When does 2a -2b divide na - nb?
B48. Products taken over primes.
B49. Smith numbers. C. Additive Number Theory
C1. Goldbach's conjecture.
C2. Sums of consecutive primes.
C3. Lucky numbers.
C4. Ulam numbers.
C5. Sums determining members of a set.
C6. Addition chains. Brauer chains. Hansen chains.
C7. The money-changing problem.
C8. Sets with distinct sums of subsets.
C9. Packing sums of pairs.
C10. Modular di.erence sets and error correcting codes.
C11. Three-subsets with distinct sums.
C12. The postage stamp problem.
C13. The corresponding modular covering problem. Harmonious labelling of graphs. C14.

From the reviews of the third edition:

"This is the third edition of Richard Guy's well-known problem book on number theory ... . The earlier editions have served well in providing beginners as well as seasoned researchers in number theory with a good supply of problems. ... many of the problems from earlier editions have been expanded with more up-to-date comments and remarks. ... There is little doubt that a new generation of talented young mathematicians will make very good use of this book ... ." (P. Shiu, The Mathematical Gazette, Vol. 89 (516), 2005)

"The earlier editions of this book are among the most-opened books on the shelves of many practicing number theorists. The descriptions of state-of-the-art results on every topic and the extensive bibliographies in each section provide valuable ports of entry to the vast literature. A new and promising addition to this third edition is the inclusion of frequent references to entries in the Online encyclopedia of integer sequences at the end of each topic." (Greg Martin, Mathematical Reviews, Issue 2005 h)