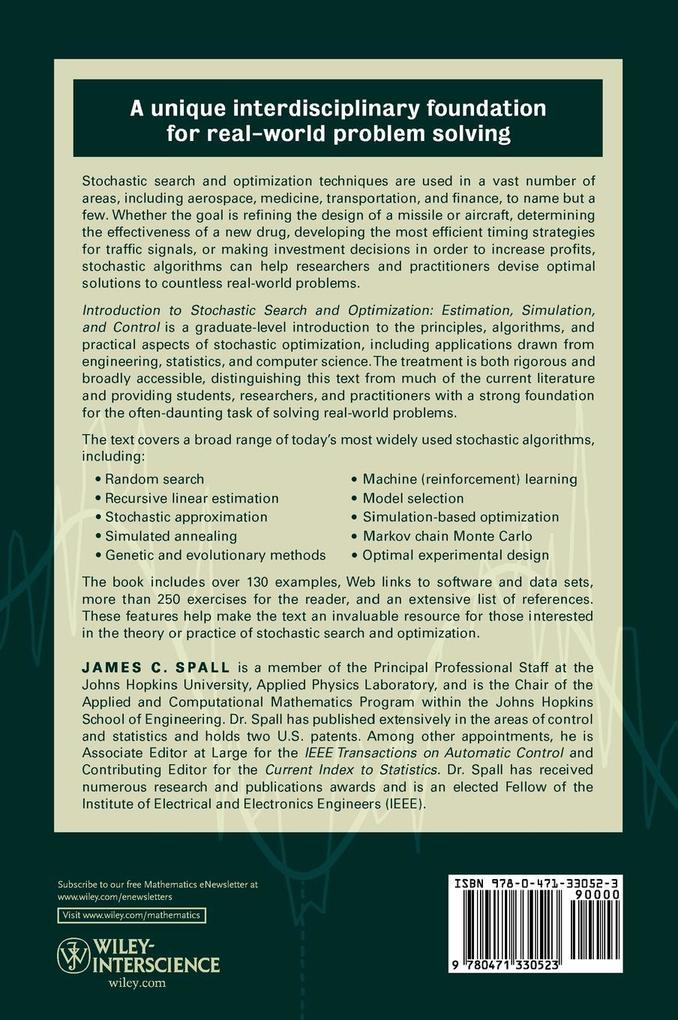 von Spall, James C. Spall
Estimation, Simulation, and Control. 'Wiley-Interscience Series in Discrete Mathematics and Optimization'. 1.…
Buch (gebunden)
* Unique in its survey of the range of topics. * Contains a strong, interdisciplinary format that will appeal to both students and researchers. * Features exercises and web links to software and data sets.

* Unique in its survey of the range of topics. * Contains a strong, interdisciplinary format that will appeal to both students and researchers. * Features exercises and web links to software and data sets.

Stochastic Approximation and the Finite-Difference Method.

Appendix B. Some Basic Tests in Statistics.

JAMES C. SPALL is a member of the Principal Professional Staff at the Johns Hopkins University, Applied Physics Laboratory, and is the Chair of the Applied and Computational Mathematics Program within the Johns Hopkins School of Engineering. Dr. Spall has published extensively in the areas of control and statistics and holds two U.S. patents. Among other appointments, he is Associate Editor at Large for the IEEE Transactions on Automatic Control and Contributing Editor for the Current Index to Statistics. Dr. Spall has received numerous research and publications awards and is an elected Fellow of the Institute of Electrical and Electronics Engineers (IEEE).

"This volume deserves a prominent role not only as a textbook, but also as a desk reference for anyone who must cope with noisy data..." ( Computing Reviews.com , January 6, 2006)
"...well written and accessible to a wide audience...a welcome addition to the control and optimization community." ( IEEE Control Systems Magazine , June 2005)

"...a step toward learning more about optimization techniques that often are not part of a statistician s training." ( Journal of the American Statistical Association , December 2004)

"Rather than simply present various stochastic search and optimization algorithms as a collection of distinct techniques, the book compares and contrasts the algorithms within a broader context of stochastic methods." ( Technometrics , August 2004, Vol. 46, No. 3)