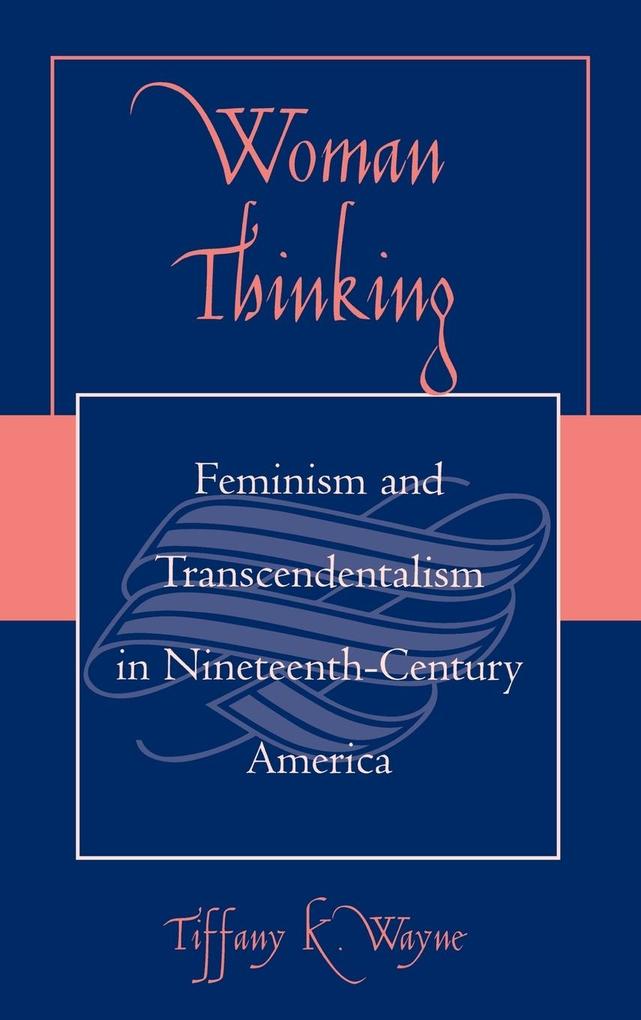 This book explores the theoretical relationship between feminism and transcendentalism through the ideas and activism of prominent 19th century female thinkers and activists such as Ednah Cheney, Caroline Dall, Margaret Fuller, and Elizabeth Oakes Smith.

Chapter 1 Introduction: The Transcendental Arc Chapter 2 "The Seeds of Thought": The Feminist Reform Vision of Margaret Fuller Chapter 3 "Woman's Right to Think": Transcendentalism in the Organized Women's Movement Chapter 4 "A Woman's Life and Work": Self-Culture, Vocation, and the Female Intellectual Chapter 5 The Concord School of Philosophy and the Feminization of Transcendentalism after the Civil War Chapter 6 Epilogue: Feminism and American Intellectual History

Tiffany K. Wayne received her Ph.D. in history from the University of California, Santa Cruz.

This is potentially the most clear-sighted analysis of Transcendentalist gender-essentialism and its constructive uses to date. There is a growing interest in women identified with Transcendentalism beyond Margaret Fuller, as well as in certain aspects of their involvement in the women's rights movement. No one else to date, however, has attempted a narrative of the whole, let alone with this double grounding in feminist and Transcendentalist history and grasp of feminist theory. The argument for post-bellum Transcendentalism is itself an important contribution to collective rethinking about periodization and feminization. -- Phyllis B. Cole, Pennsylvania State University, Delaware County Tiffany K. Wayne's ambitious and original new study, Woman Thinking, is a fascinating and important book, which succeeds in providing compelling new interpretations of two of the major phenomena of America in the antebellum years, the Transcendental Circle and the women's rights movement. Brava for a thoroughly researched, powerfully argued and exceedingly well written piece of scholarship. This book should have a major impact on both literary and historical studies of nineteenth century America-and beyond. -- Ellen Carol DuBois, University of California, Los Angeles Meticulously researched and cogently argued, Woman Thinking unmoors our understanding of Transcendentalism as a male-dominated discourse and deepens our conception of the movement's feminist agendas, participants, histories, and outcomes. While recognizing the central importance of Margaret Fuller as a transcendental thinker, this book yields a nuanced and revisionary understanding of other women who developed, revised, and applied transcendental concepts to the women's movement, to social issues, and to the life of the mind. Exposing how gendered logics have maintained a narrative of transcendentalism's demise at mid-century, Woman Thinking follows the movement into the postbellum years, showing how it feminist tradition continued throughout the nineteenth-century. -- Nicole Tonkovich, University of California, San Diego Writing against the grain of received knowledge both of Transcendentalism and Feminism, Tiffany Wayne convincingly links these two great movements into a coherent and forceful re-evaluation of both politics and ideology in the nineteenth-century. This is an important contribution that is thoughtful and elegantly written. -- Edith Gelles, author, Portia: The World of Abigail Adams This work expands nineteenth-century women's intellectual history following a trajectory from Margaret Fuller's work through the contributions of Caroline Dall, Elizabeth Oakes Smith, and Paulina Wright Davis. Describing how these women explored the feminist implications of Transcendentalism, Wayne's account will enrich our histories of that intellectual movement. -- Judith Mattson Bean, Texas Woman's University