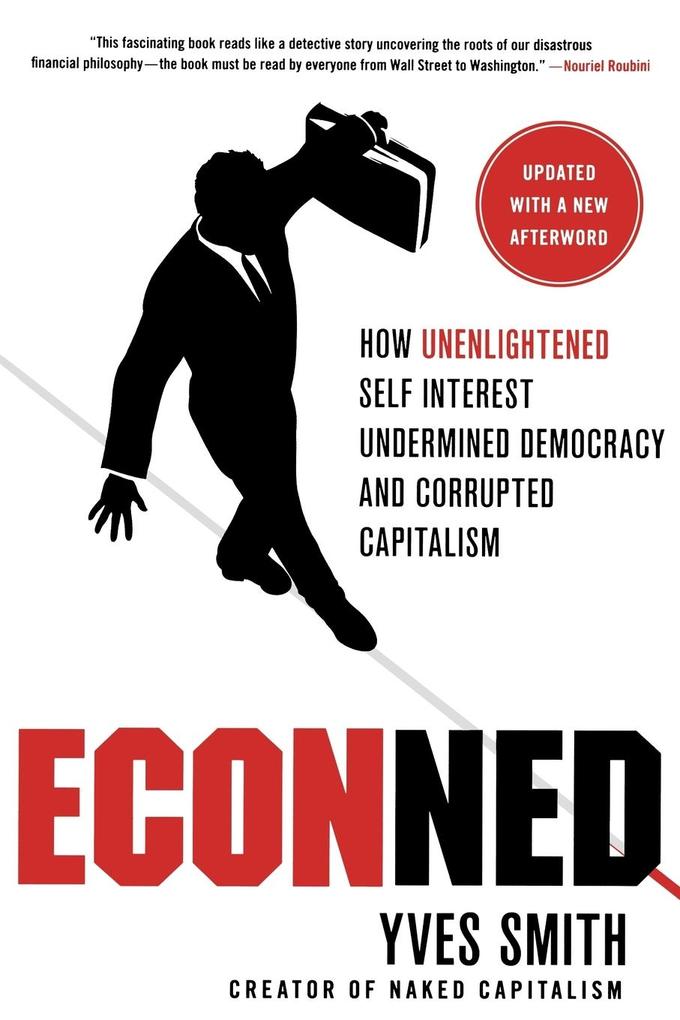 ECONned is the first book to examine the unquestioned role of economists as policymakers, and how they helped create an unmitigated economic disaster. Here, Yves Smith looks at how economists in key policy positions put doctrine before hard evidence, ignoring the deteriorating conditions and rising dangers that eventually led them, and us, off the cliff and into financial meltdown.  Intelligently written for the layman, Smith takes us on a terrifying investigation of the financial realm over the last twenty-five years of misrepresentations, naive interpretations of economic conditions, rationalizations of bad outcomes, and the failure to recognize clear signs of growing instability.

Introduction * THE SORCERER'S APPRENTICE: HOW ECONOMISTS CAME TO PRACTICE JUNK SCIENCE * The Voodoo of Financial Economics * How Elegant Math Trumped Messy Facts and Made Neoclassical Economics Central * The Blind Men and the Elephant of the Financial System * THE MARKETING AND INSTITUTIONALIZATION OF PHONY SCIENCE * The Cult of Free Markets * The Codification of Ideology: The Role of the Courts * THE PROOF OF THE PUDDING: RADICAL DEREGULATION LEADS TO LOOTING * It's Not the Bubbles, It's the Leverage * How Deregulation Led to Predation * Large Scale Looting Produces the Perfect Storm * "HOUSTON, WE HAVE A PROBLEM" * The Drunks are Looking Under the Streetlight for Their Keys * Suggested Reforms

"The helplessness you feel, in the face of the demonic complexity of modern finance . . .set it aside, and pick up Yves Smith book ECONned.  Indignation and clarity and omnivorous knowledge come together in her writing, to explain how we, the taxpayers, are being meticulously fleeced.  Never go into an argument about the financial crisis unarmed again." - Stephen Metcalf, Slate Columnist "In ECONned, Smith blows the top wide open on the role that economists and policy makers had in enabling Wall Street greed and misdeeds. This fascinating book reads like a detective story uncovering the roots of our disastrous financial philosophy - the book must be read by everyone from Wall Street to Washington." - Nouriel Roubini, Professor of Economics at New York University and founder of RGE Monitor "Yves Smith has written a wonderful book which combines first hand knowledge of financial markets with a devastating attack on the scientific pretensions of economics. It is required reading by all those who want to dig below the surface of the worst economic collapse since the war to the intellectual and regulatory rottenness underlying it." - Lord  Skidelsky, author of Keynes: The Return of the Master "This book is a fascinating and insightful reminder that economics is like any other powerful tool.  It can be used to help understand the world and solve important problems - or to rationalize ridiculous behavior and overwhelm common sense.  Smith provides a brilliantly researched tour of good ideas gone bad." - Charles Wheelan, author of Naked Economics: Undressing the Dismal Science "Lost your job, lost your life savings, the country's going down the proverbial - want to know who did it? Yves Smith tells the tale of how bad economics created the foundations for the 'Madoff economy'. After you read the book, just collect your pitchforks and get ready to march on the University of Chicago or Wall Street or both! A refreshingly sane and honest analysis." - Satyajit Das, author of Traders, Guns & Money: Knowns & Unknowns in the Wonderful World of Derivatives "If you only read one book on the global financial crisis, it should be Econned by "Yves Smith", an entertaining, thorough and damning indictment of the way that Western economists, bankers and politicians together messed up - and are still messing up - the global financial and economic system." - Kevin Rafferty, South China Morning Post "ECONned by Yves Smith has three great merits: what it says is largely accurate, largely interesting, and largely new."  - Central Banking Journal "Econned is one of the most important books on the financial crisis.  Yves Smith understands both the Street and finance theory in a way that few writers do.  Her argument that short sellers provided critical fuel for subprime lending flips The Big Short's conventional wisdom on its head and belies Bernanke's arguments that the housing bubble was the result primarily of a global supply glut.  There is no other book with an appendix (Appendix II, no less!) that is a must-read for understanding the financial crisis. - Adam J. Levitin, Professor of Law, Georgetown University Law Center