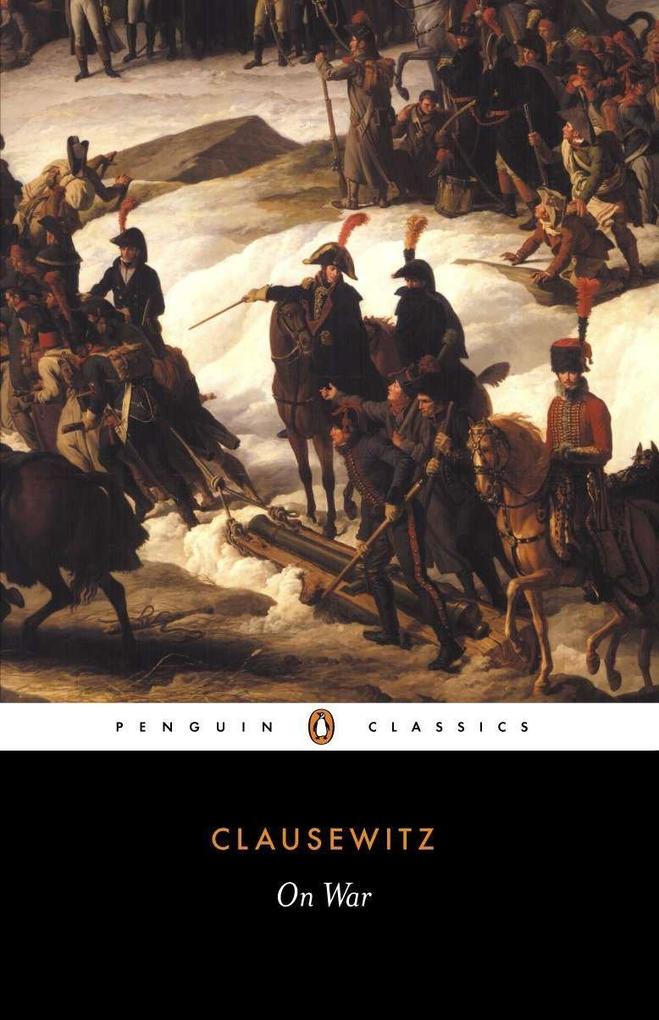 von Carl von Clausewitz
bibliography, index. Sprache: Englisch.
Buch (kartoniert)
'War is an act of violence intended to compel our opponent to our will'

Writing at the time of Napoleon's greatest campaigns, Prussian soldier and writer Carl von Clausewitz created this landmark treatise on the art of warfare, which presented war as part of a coherent system of political thought. In line with Napoleon's own military actions, Clausewitz illustrated the need to annihilate the enemy and to make a strong display of one's power in an 'absolute war' without compromise. But he was also careful to distinguish between war and politics, arguing that war could only be justified when debate was no longer adequate, and that if undertaken, its aim should ultimately be to improve the wellbeing of the nation. Combining military theory and pratice, On War has had a profound influence on subsequent thinking on warfare.

This edition contains a detailed introduction examining Von Clausewitz's skill and reputation as a writer, philosopher and political thinker, as well as bibliography, notes and a glossary.

On WarPreface to the Pelican Edition
Introduction by Anatol Rapoport
On War
Introduction by Col. F. N. Maude
Introduction of the Author
Brief Memoir of General Clausewitz by the Translator
Book One: On The Nature Of War
I. What is War?
II. End and Means in War
III. The Genius for War
IV. Of Danger in War
V. Of Bodily Exertion in War
VI. Information in War
VII. Friction in War
VIII. Concluding Remarks
Book Two: On The Theory Of War
I. Branches of the Art of War
II. On the Theory of War
III. Art or Science of War
IV. Methodicism
V. Criticism
VI. On Examples
Book Three: Of Strategy In General
I. Strategy
II. Elements of Strategy
III. Moral Forces
IV. The Chief Moral Powers
V. Military Virtue of an Army
VI. Boldness
VII. Perseverance
VIII. Superiority of Numbers
IX. The Surprise
X. Stratagem
XI. Assembly of Forces in Space
XII. Assembly of Forces in Time
XIII. Strategic Reserve
XIV. Economy of Forces
XV. Geometrical Element
XVI. On the Suspension of the Act in War
XVII. On the Character of Modern War
XVIII. Tension and Rest
Book Four: The Combat
I. Introductory
II. Character of the Modern Battle
III. The Combat in General
IV. The Combat in General (continuation)
V. On the Signification of the Combat
VI. Duration of the Combat
VII. Decision of the Combat
VIII. Mutual Understanding as to a Battle
IX. The Battle
X. Effects of Victory
XI. The Use of the Battle
XII. Strategic Means of Utilizing Victory
XIII. Retreat After a Lost Battle
Sketches For Book Eight: Plan Of War
I. Introduction
II. Absolute and Real War
III. (A) Interdependence of the Parts in War
(B) Of the Magnitude of the Object of the War, and the Efforts to be Made
IV. Ends in War More Precisely Defined-Overthrow of the Enemy
V. Ends in War More Precisely Defined (continued)-Limited Object
VI. (A) Influence of the Political Object on the Military Object
(B) War as an Instrument of Policy
Concluding Remarks by Anatol Rapoport
Notes
References
Glossary
Index

Prussian general and military theorist Charles Von Clausewitz was born in the Prussian city of Burg in 1780. He was commissioned to take part in the campaigns of the First Coalition against Revolutionary France. He is most famous for his military treatise Vom Kriege, translated into English as On War.