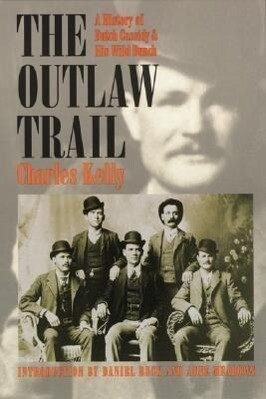 A History of Butch Cassidy and His Wild Bunch.
Illus. , maps.
Sprache: Englisch.

The Wild Bunch, the confederation of western outlaws headed by Butch Cassidy, found sanctuary on the rugged Outlaw Trail. Stretching across Montana, Idaho, Wyoming, Colorado, Utah, Nevada, Arizona, and New Mexico, this trail offered desert and mountain hideouts to bandits and cowboys. The almost inaccessible Hole-in-the-Wall in Wyoming was a station on the Outlaw Trail well known to Butch Cassidy. To the south, in Utah, was the inhospitable Robbers' Roost, where Butch and his friends camped in 1897 after a robbery at Castle Gate. Charles Kelly recreates the mean and magnificent places frequented by the Wild Bunch and a slew of lesser outlaws. At the same time, he brings Butch Cassidy to life, traces his criminal apprenticeship and meeting with the Sundance Kid, and masterfully describes the exploits of the Wild Bunch.

Charles Kelly was a historical writer who lived in Utah until his death in 1971. "The Outlaw Trail," originally published in 1938 and revised and expanded in 1959, is considered a classic. Introducing it are Daniel Buck and Anne Meadows, who followed the South American Outlaw Trail to find out what became of Butch and Sundance.