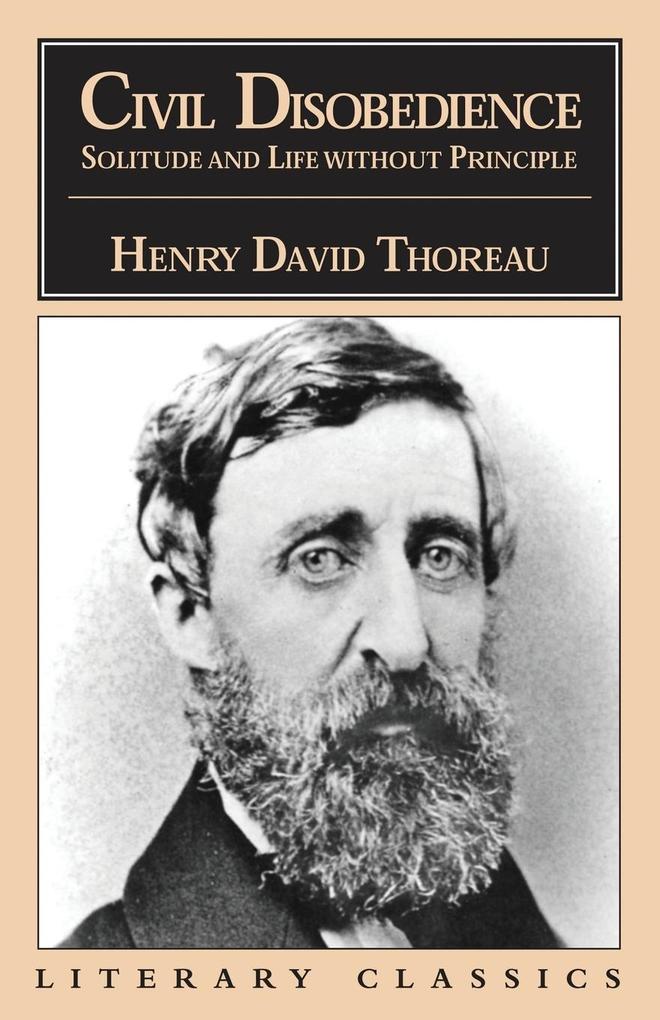 10% Rabatt sichern mit Gutscheincode: SPAREN10
​
Henry David Thoreau (1817-1862) championed the belief that people of conscience were at liberty to follow their own opinion. In these selections from his writings, we see Thoreau the individualist and opponent of injustice. Civil Disobedience(1849), … weiterlesen
Geschenk per Mail versenden
Buch (kartoniert)

Henry David Thoreau (1817-1862) championed the belief that people of conscience were at liberty to follow their own opinion. In these selections from his writings, we see Thoreau the individualist and opponent of injustice. Civil Disobedience(1849), composed following Thoreau's imprisonment for refusing to pay his taxes in protest against slavery and the Mexican War, is an eloquent declaration of the principles that make revolution inevitable in times of political dishonor. Solitude, from his masterpiece, Walden (1854), poetically describes Thoreau's oneness with nature and the companionship solitude offers to those who want to be rid of the travails of the world to discover themselves. Life without Principle(posthumously published 1863) decries the way in which excessive devotion to business and money coarsens the fabric of society: in merely making a living, the meaning of life gets lost.

Henry David Thoreau (see name pronunciation; July 12, 1817 - May 6, 1862) was an American author, poet, philosopher, abolitionist, naturalist, tax resister, development critic, surveyor, and historian. A leading transcendentalist,[2] Thoreau is best known for his book Walden, a reflection upon simple living in natural surroundings, and his essay Resistance to Civil Government (also known as Civil Disobedience), an argument for disobedience to an unjust state.

Thoreau's books, articles, essays, journals, and poetry total over 20 volumes. Among his lasting contributions are his writings on natural history and philosophy, where he anticipated the methods and findings of ecology and environmental history, two sources of modern-day environmentalism. His literary style interweaves close natural observation, personal experience, pointed rhetoric, symbolic meanings, and historical lore, while displaying a poetic sensibility, philosophical austerity, and "Yankee" love of practical detail. He was also deeply interested in the idea of survival in the face of hostile elements, historical change, and natural decay; at the same time he advocated abandoning waste and illusion in order to discover life's true essential needs.

He was a lifelong abolitionist, delivering lectures that attacked the Fugitive Slave Law while praising the writings of Wendell Phillips and defending abolitionist John Brown. Thoreau's philosophy of civil disobedience later influenced the political thoughts and actions of such notable figures as Leo Tolstoy, Mahatma Gandhi, and Martin Luther King, Jr.

Thoreau is sometimes cited as an anarchist. Though Civil Disobedience seems to call for improving rather than abolishing government - "I ask for, not at once no government, but at once a better government"[5] - the direction of this improvement points toward anarchism: "'That government is best which governs not at all;' and when men are prepared for it, that will be the kind of government which they will have." Richard T. Drinnon partly blames Thoreau for the ambiguity, noting that Thoreau's "sly satire, his liking for wide margins for his writing, and his fondness for paradox provided ammunition for widely divergent interpretations of 'Civil Disobedience'."