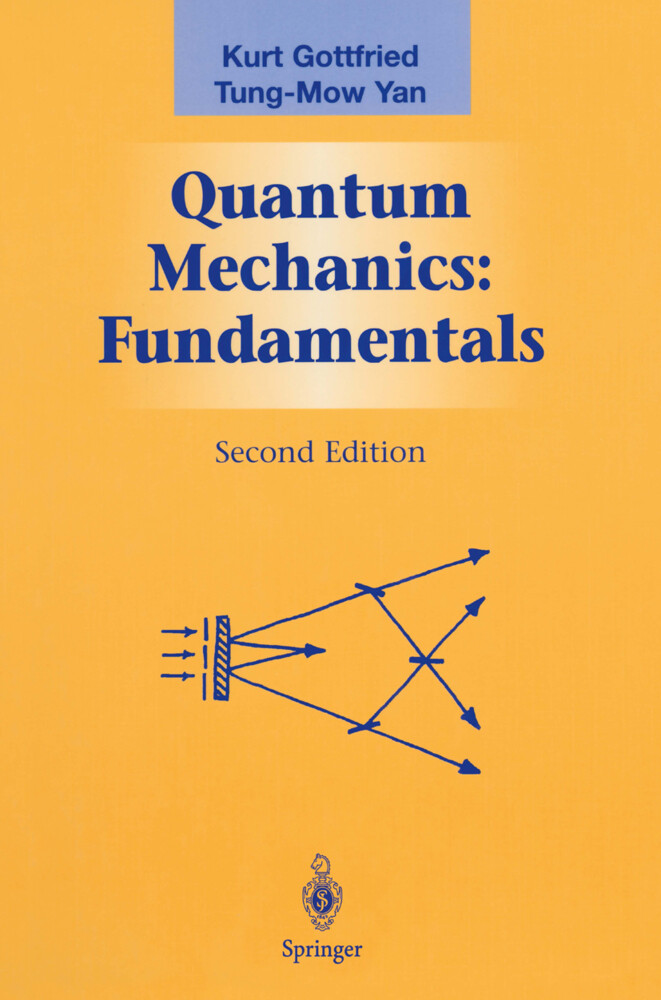 von Kurt Gottfried, Tung-Mow Yan
2nd ed. 2003. Paperback. Sprache: Englisch.
Buch (kartoniert)
Quantum mechanics was already an old and solidly established subject when the first edition of this book appeared in 1966. The context in which a graduate text on quantum mechanics is studied today has changed a good deal, however. In 1966, most ente … weiterlesen
Geschenk per Mail versenden
Buch (kartoniert)

Quantum mechanics was already an old and solidly established subject when the first edition of this book appeared in 1966. The context in which a graduate text on quantum mechanics is studied today has changed a good deal, however. In 1966, most entering physics graduate students had a quite limited exposure to quan­ tum mechanics in the form of wave mechanics. Today the standard undergraduate curriculum contains a large dose of elementary quantum mechanics, and often intro­ duces the abstract formalism due to Dirac. Back then, the study of the foundations by theorists and experimenters was close to dormant, and very few courses spent any time whatever on this topic. At that very time, however, John Bell's famous theorem broke the ice, and there has been a great flowering ever since, especially in the laboratory thanks to the development of quantum optics, and more recently because of the interest in quantum computing. And back then, the Feynman path integral was seen by most as a very imaginative but rather useless formulation of quantum mechanics, whereas it now plays a large role in statistical physics and quantum field theory, especially in computational work. For these and other reasons, this book is not just a revision of the 1966 edition. It has been rewritten throughout, is differently organized, and goes into greater depth on many topics that were in the old edition.

JOURNAL OF PHYSICS A: MATHEMATICAL AND GENERAL (27 FEBRUARY 2004)
"... [The first edition] has become one of the most used and respected accounts of quantum theory ... Gottfried and Yan's book contains a vast amount of knowledge and understanding. As well as explaining the way in which quantum theory works, it attempts to illuminate fundamental aspects of the theory ... For use with a well-constructed course (and, of course, this is the avowed purpose of the book; a useful range of problems is provided for each chapter), or for the relative expert getting to grips with particular aspects of the subject or aiming for a deeper understanding, the book is certainly ideal."
PHYSICS TODAY (August 2004)
"...especially useful for graduate students and professors who have time to go beyond the bare essentials of a topic and explore it in depth... I would recommend the book for its lucid discussions of less familiar topics alone, but the authors do not short-change the standard subjects... I expect the second edition of Gottfried and Yan to join my library of well thumbed-through texts."
From the reviews of the second edition:
"The book under review offers the reader in-depth physical and mathematical understanding of quantum mechanics. The book is the second edition of Gottfried's Quantum mechanics. ... Readers' anticipations have finally been rewarded by the second edition of the earlier book, which is a complete revision covering most of the topics and much more ... . The appendix contains the values of important physical constants, some useful operator identities ... . The end notes at the conclusion of each chapter contain many useful references." (Howard E. Brandt, Mathematical Reviews, Issue 2007 f)