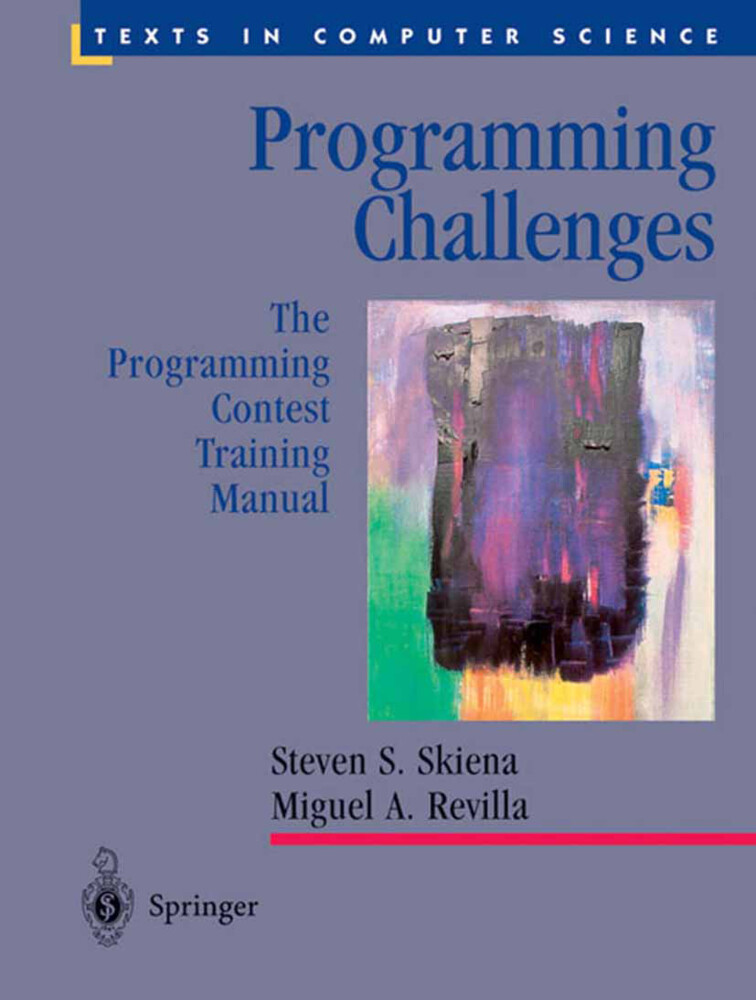 von Miguel A. Revilla, Steven S Skiena
The Programming Contest Training Manual. Auflage 2003. Paperback. Sprache: Englisch.
Buch (kartoniert)
There are many distinct pleasures associated with computer programming. Craftsmanship has its quiet rewards, the satisfaction that comes from building a useful object and making it work. Excitement arrives with the flash of insight that cracks a prev … weiterlesen
Geschenk per Mail versenden
Buch (kartoniert)

There are many distinct pleasures associated with computer programming. Craftsmanship has its quiet rewards, the satisfaction that comes from building a useful object and making it work. Excitement arrives with the flash of insight that cracks a previously intractable problem. The spiritual quest for elegance can turn the hacker into an artist. There are pleasures in parsimony, in squeezing the last drop of performance out of clever algorithms and tight coding.

The games, puzzles, and challenges of problems from international programming competitions are a great way to experience these pleasures while improving your algorithmic and coding skills. This book contains over 100 problems that have appeared in previous programming contests, along with discussions of the theory and ideas necessary to attack them. Instant online grading for all of these problems is available from two WWW robot judging sites. Combining this book with a judge gives an exciting new way to challenge and improve your programming skills.

This book can be used for self-study, for teaching innovative courses in algorithms and programming, and in training for international competition.

The problems in this book have been selected from over 1,000 programming problems at the Universidad de Valladolid online judge. The judge has ruled on well over one million submissions from 27,000 registered users around the world to date. We have taken only the best of the best, the most fun, exciting, and interesting problems available.

Steven S. Skiena is a professor of computer science at SUNY Stony Brook and is the author of many widely used books, including The Algorithm Design Manual. He received the 2001 IEEE Computer Society Undergraduate Teaching Award. Miguel A. Revilla is a professor of applied mathematics at the University of Vallodolid, Spain. He is the official website archivist of the ACM ICPC and creator/maintainer of the primary robot judge and content-hosting website.

"Skiena and Revilla's new book 'Programming Challenges: The Programming Contest Training Manual' is just the ticket for those interested in a jumpstart to the world of contest programming. With special emphasis on the international ACM collegiate contests, the book's best feature is each chapter's pithy introduction that demystifies a particular scheme or algorithmic approach. The ensemble of these explications coupled with the contest strategy guidelines in the appendix can enable a novice to enhance contest results dramatically in a short time simply by solving the suggested exercises in each chapter. Even contest veterans are likely to be able to find a nugget or two in the explanations and strategies.
"Presented in a logical order (contest programming has over a dozen different primary attacks), the book guides readers not only through the techniques and algorithms required but also through a huge set of problems that can be used for training. Solutions can be submitted to Valladolid University's online trainer for quick feedback and reinforcement.
"If you're the sort who likes to have a single volume that covers the
vast majority of a field, you'll love Skiena and Revilla's new tome."
--Rob Kolstad, Ph.D., Head Coach, USA Computing Olympiad