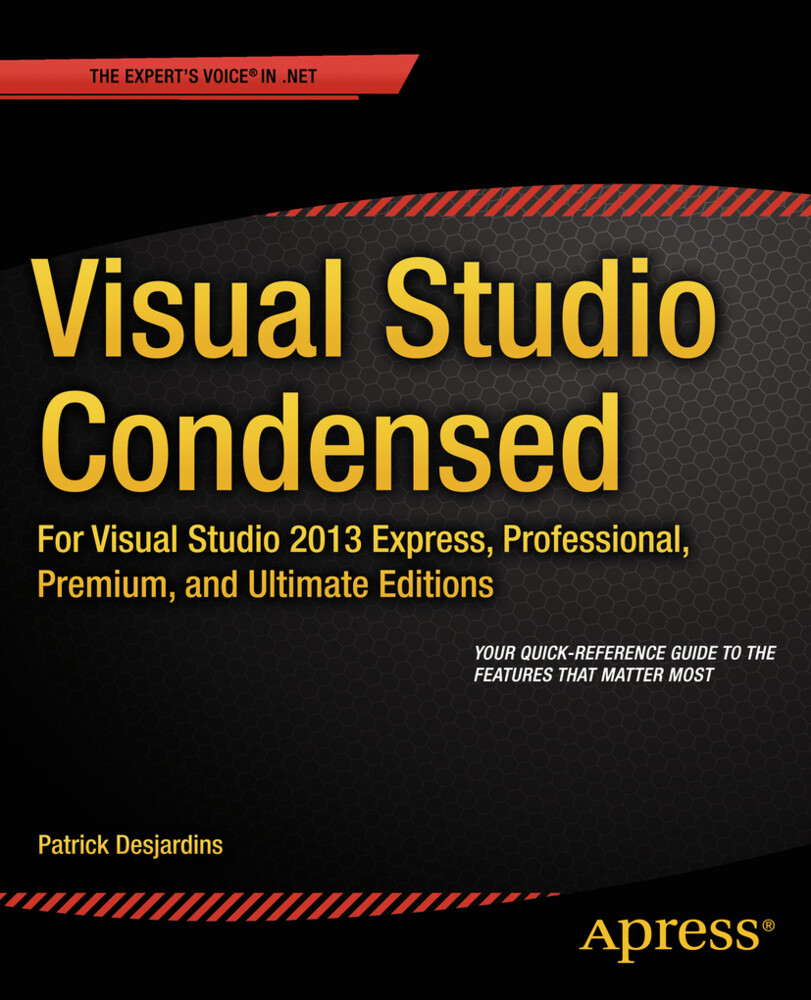 von Patrick Desjardins
For Visual Studio 2013 Express, Professional, Premium and Ultimate Editions. 1st ed. Paperback. Sprache:…
Buch (kartoniert)
Visual Studio 2013 is one of the most sophisticated integrated development environments in the world today. With hundreds of features and several different editions available, it can be hard to learn your way around, and hard to know whether you're u … weiterlesen
Dieser Artikel ist auch verfügbar als:
Geschenk per Mail versenden
Buch (kartoniert)

Visual Studio 2013 is one of the most sophisticated integrated development environments in the world today. With hundreds of features and several different editions available, it can be hard to learn your way around, and hard to know whether you're using it to its full potential. Visual Studio Condensed gives you a quick and systematic guide to the features that matter most, tagged clearly according to their availability. The book starts by familiarizing you with the main features of Visual Studio and how to configure the user interface depending on your needs. You'll then dive into each key developer tool in turn, starting with the editor window and going through the navigation pane, documentation, and the NuGet package manager. Debugging is a difficult skill to master with a range of approaches and tools at your disposal, so you'll see how to make best use of breakpoints, the debugging windows, tracing and managed memory analysis, as well as tips and tricks on advanced debugging techniques that can make a real difference to your productivity. Visual Studio 2013 comes with sophisticated code improvement tools. You can visualize relationships in your code with the Code Map feature, find duplicated code to maximize your code reuse, and use Visual Studio's inbuilt list of metrics to figure out just how healthy your code is and how difficult or easy it will be to maintain. Testing is also made easy with unit testing and web performance tests as well as a Test Manager to organize your tests into test plans and suites. The final chapters of the book cover team work with Team Foundation Server, framework-specific features, and how to build your own Visual Studio extensions. Visual Studio Condensed is the ideal manual for busy developers who just want to get on with what matters: writing code. Whether you're new to Visual Studio or brushing up on the latest features, this book will get you up to speed in no time.

Patrick Desjardins has been a Microsoft Most Valuable Professional (MVP) in ASP.NET since 2013. He is a software engineer known for his analysis, resourcefulness and ability to find effective solutions quickly. Since the early days of his professional career, his focus has been on keeping his knowledge up to date in order to provide quality services to meet customers needs. His main area of interest is Web development, which he has embraced since the early 2000s, and he continues to train in new technologies on a daily basis. Patrick has been developing on .NET professionally since 2004. He has also developed many projects in PHP, giving him a broad perspective on how the web can be developed. Patrick is driven to help people embrace Microsoft technologies in the enterprise. He is a professional who has a well developed work ethic and who has the desire to perform on both quality and timeliness. He is a strong believer in ASP.NET MVC and Entity Framework, which help to produce professional quality websites that follow good standards using HTML5, CSS3 and proven design patterns.
Kunden, die diesen Artikel gekauft haben, kauften auch
Schreiben Sie eine Rezension