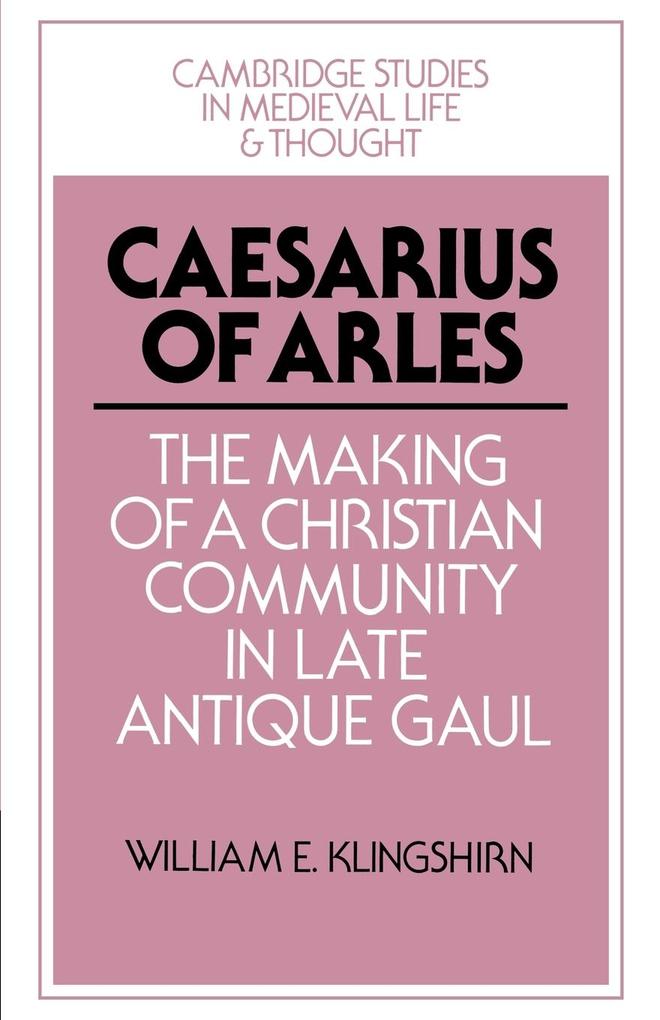 von William E. Klingshirn
The Making of a Christian Community in Late Antique Gaul. Paperback. Sprache: Englisch.
Buch (kartoniert)
A study of the Christianisation of southern France through the career and writings of Bishop Caesarius of Arles.

The Making of a Christian Community in Late Antique Gaul.
Paperback.
Sprache: Englisch.

A study of the Christianisation of southern France through the career and writings of Bishop Caesarius of Arles.

Introduction; 1. In search of the vita perfecta; 2. Late Roman Arles; 3. The making of a reformer; 4. Visigothic Arles and its bishop; 5. The Ostrogothic peace; 6. Christian rhetoric and ritual action; 7. Christianity as a community religion; 8. The limits of Christianisation; 9. The coming of the Franks; 10. The legacy of Caesarius.

"...a thoughtful, well-written study...the first serious study on Cesarius of Arles." Journal of Church and State "William Klingshirn's richly nuanced study of Caesarius's life. bridging as it does the still Roman world of Sidonius and the Merovingian world of Gregory, is an immensely valuable contribution to the growing body of recent scholarship on late-and sub-Roman Gaul." Speculum-A Journal of Medieval Studies "A splendid book that rewards the reader with plentiful insights not only into the life and work of the Bishop of Arles but also the social and religious setting of his work." --Religious Studies Review "In this fine book Klingshirn (Catholic Univ. of America) provides a much-needed, comprehensive study (the first in English) of the life and career of the redoubtable sixth-century bishop of Arles, Caesarius. This topic alone would justify such a scholarly undertaking, but the author has offered something more: a fascinating glimpse into a corner of the late antique world." C.L. Hanson, Choice "Devotion to scholarly research provides the author with the material for his literary skill. He has read and interpreted well the known ancient sources. His careful use of the obviously hagiographical Vita of Caesarius, written by friends soon after the bishop's death, and his extensive but judicious use of Caesarius's well-preserved Sermons reflect fine scholarly ability." Richard Spielman, Church History "...founded on vast erudition deployed with judiciousness and care, the book successfully joins methods of social history and cultural anthropology to more traditional historical methods...Klingshirn thus offers a rich, multilayered analysis of Caesarius and his times which rings true. As such, it will remain a definitive work for years to come." John Cavadini, Journal of Religion "In putting Caesarius and his writings into context, not only has Klingshirn done a superb job, but he also has helped to counteract the past emphasis on the works of Gregory of tours, as he has helped to show that for southern Gaul 'the power of rhetoric was more highly esteemed than the potency of relics.'" Ralph Mathisen, Medieval Prosopography "In this study, William Klingshirn paints a more complete portrait of Caesarius... ...Klinghshirn's study remains extremely valuable for the student of church history by shredding light on an individual and an era all too often overlooked." Paul W. Robinson, Concordia Theological Quarterly