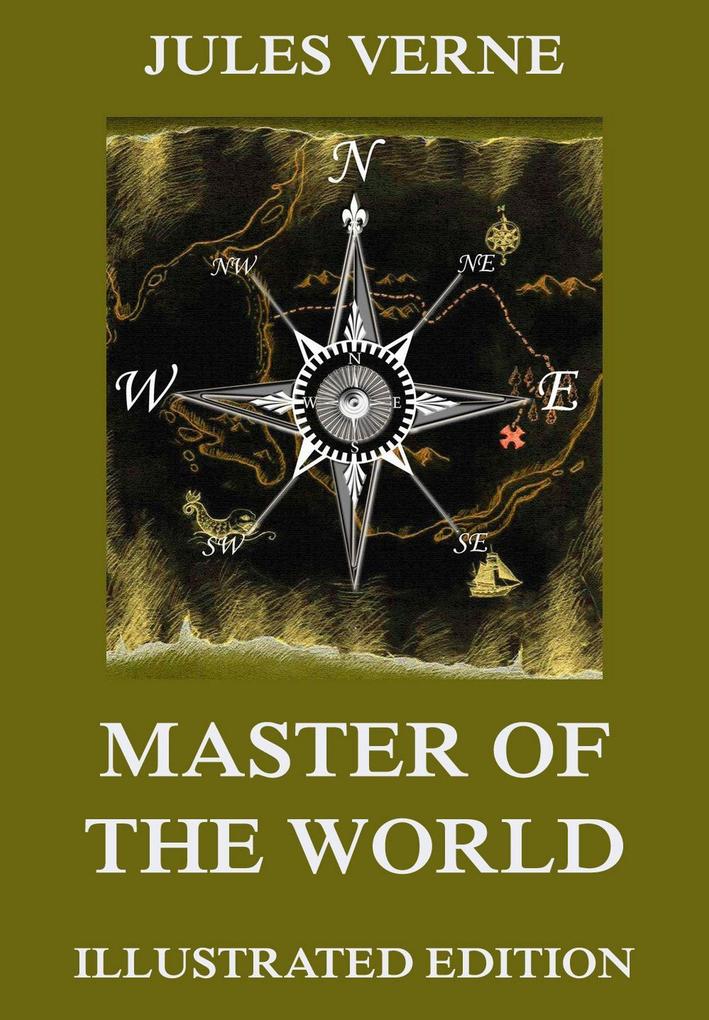 Master Of The World

This is the fully illustrated and extended annotated edition including a rare and extensive biographical essay on the author, his life and works plus a wealth of illustrations.

This is the fully illustrated and extended annotated edition including a rare and extensive biographical essay on the author, his life and works plus a wealth of illustrations.

This attractive digital edition of one of this prophetic writers last and most imaginative books is a companion volume to his aeroplane-prediction romance "Robin the Conqueror." In this story, the scenes of which are laid in America, there is a machine, a sort of hydro-aeroplane. "The Terrible," that travels on the land like an automobile, under the water like a submarine, on the surface like a motor boat and in the air like an aeroplane...

The suggestion of the Star came like a revelation. It was accepted everywhere. Not only were these three vehicles the work of the same inventor; they were the same machine!

It was not easy to see how the remarkable transformation could be practically accomplished from one means of locomotion to the other. How could an automobile become a boat, and yet more, a submarine? All the machine seemed to lack was the power of flying through the air. Nevertheless, everything that was known of the three different machines, as to their size, their shape, their lack of odor or of steam, and above all their remarkable speed, seemed to imply their identity. The public, grown blasé with so many excitements, found in this new marvel a stimulus to reawaken their curiosity.

The newspapers dwelt now chiefly on the importance of the invention. This new engine, whether in one vehicle or three, had given proofs of its power. What amazing proofs! The invention must be bought at any price. The United States government must purchase it at once for the use of the nation. Assuredly, the great European powers would stop at nothing to be beforehand with America, and gain possession of an engine so invaluable for military and naval use. What incalculable advantages would it give to any nation, both on land and sea! Its destructive powers could not even be estimated, until its qualities and limitations were better known. No amount of money would be too great to pay for the secret; America could not put her millions to better use.

But to buy the machine, it was necessary to find the inventor; and there seemed the chief difficulty. In vain was Lake Kirdall searched from end to end. Even its depths were explored with a sounding-line without result. Must it b
e concluded that the submarine no longer lurked beneath its waters? But in that case, how had the boat gotten away? For that matter, how had it come? An insoluble problem!

The submarine was heard from no more, neither in Lake Kirdall nor elsewhere. It had disappeared like the automobile from the roads, and like the boat from the shores of America. Several times in my interviews with Mr. Ward, we discussed this matter, which still filled his mind. Our men continued everywhere on the lookout, but as unsuccessfully as other agents.

On the morning of the twenty-seventh of June, I was summoned into the presence of Mr. Ward.

Well, Strock, said he, here is a splendid chance for you to get your revenge.

Revenge for the Great Eyrie disappointment?

What chance? asked I, not knowing if he spoke seriously, or in jest.

Why, here, he answered. Would not you like to discover the inventor of this three-fold machine?

I certainly should, Mr. Ward. Give me the order to take charge of the matter, and I will accomplish the impossible, in order to succeed. It is true, I believe it will be difficult.

Undoubtedly, Strock. Perhaps even more difficult than to penetrate into the Great Eyrie.

It was evident that Mr. Ward was intent on rallying me about my unsuccess. He would not do that, I felt assured, out of mere unkindness. Perhaps then he meant to rouse my resolution. He knew me well; and realized that I would have given anything in the world to recoup my defeat. I waited quietly for new instructions.

Mr. Ward dropped his jesting and said to me very generously, I know, Strock, that you accomplished everything that depended on human powers; and that no blame attaches to you. But we face now a matter very different from that of the Great Eyrie. The day the government decides to force that secret, everything is ready. We have only to spend some thousands of dollars, and the road will be open.

That is what I would urge.

But at present, said Mr. Ward, shaking his head, it is much more important to place our hands on this fantastic inventor, who so constantly escapes us. That is work for a detective, indeed; a master detective!

He has not been heard from again?

No; and though there is every reason to believe that he has been, and still continues, beneath the waters of Lake Kirdall, it has been impossible to find any trace of him anywhere around there. One would almost fancy he had the power of making himself invisible, this Proteus of a mechanic!

It seems likely, said I, that he will never be seen until he wishes to be.

True, Strock. And to my mind there is only one way of dealing with him, and that is to offer him such an enormous price that he cannot refuse to sell his invention.

Mr. Ward was right. Indeed, the government had already made the effort to secure speech with this hero of the day, than whom surely no human being has ever better merited the title. The press had widely spread the news, and this extraordinary individual must assuredly know what the government desired of him, and how completely he could name the terms he wished.

Surely, added Mr. Ward, this in
vention can be of no personal use to the man, that he should hide it from the rest of us. There is every reason why he should sell it. Can this unknown be already some dangerous criminal who, thanks to his machine, hopes to defy all pursuit?

My chief then went on to explain that it had been decided to employ other means in search of the inventor. It was possible after all that he had perished with his machine in some dangerous maneuver. If so, the ruined vehicle might prove almost as valuable and instructive to the mechanical world as the man himself. But since the accident to the schooner Markel on Lake Kirdall, no news of him whatever had reached the police.

On this point Mr. Ward did not attempt to hide his disappointment and his anxiety. Anxiety, yes, for it was manifestly becoming more and more difficult for him to fulfill his duty of protecting the public. How could we arrest criminals, if they could flee from justice at such speed over both land and sea? How could we pursue them under the oceans? And when dirigible balloons should also have reached their full perfection, we would even have to chase men through the air! I asked myself if my colleagues and I would not find ourselves some day reduced to utter helplessness? If police officials, become a useless incumbrance, would be definitely discarded by society?

Here, there recurred to me the jesting letter I had received a fortnight before, the letter which threatened my liberty and even my life. I recalled, also, the singular espionage of which I had been the subject. I asked myself if I had better mention these things to Mr. Ward. But they seemed to have absolutely no relation to the matter now in hand. The Great Eyrie affair had been definitely put aside by the government, since an eruption was no longer threatening. And they now wished to employ me upon this n
ewer matter. I waited, then, to mention this letter to my chief at some future time, when it would be not so sore a joke to me.

Mr. Ward again took up our conversation. We are resolved by some means to establish communication with this inventor. He has disappeared, it is true; but he may reappear at any moment, and in any part of the country. I have chosen you, Strock, to follow him the instant he appears. You must hold yourself ready to leave Washington on the moment. Do not quit your house, except to come here to headquarters each day; notify me, each time by telephone, when you start from home, and report to me personally the moment you arrive here.

I will follow orders exactly, Mr. Ward, I answered. But permit me one question. Ought I to act alone, or will it not be better to join with me?

That is what I intend, said the chief, interrupting me. You are to choose two of our men whom you think the best fitted.

I will do so, Mr. Ward. And now, if some day or other I stand in the presence of our man, what am I to do with him?

Above all things, do not lose sight of him. If there is no other way, arrest him. You shall have a warrant.

A useful precaution, Mr. Ward. If he started to jump into his automobile and to speed away at the rate we know of, I must stop him at any cost. One cannot argue long with a man making two hundred miles an...