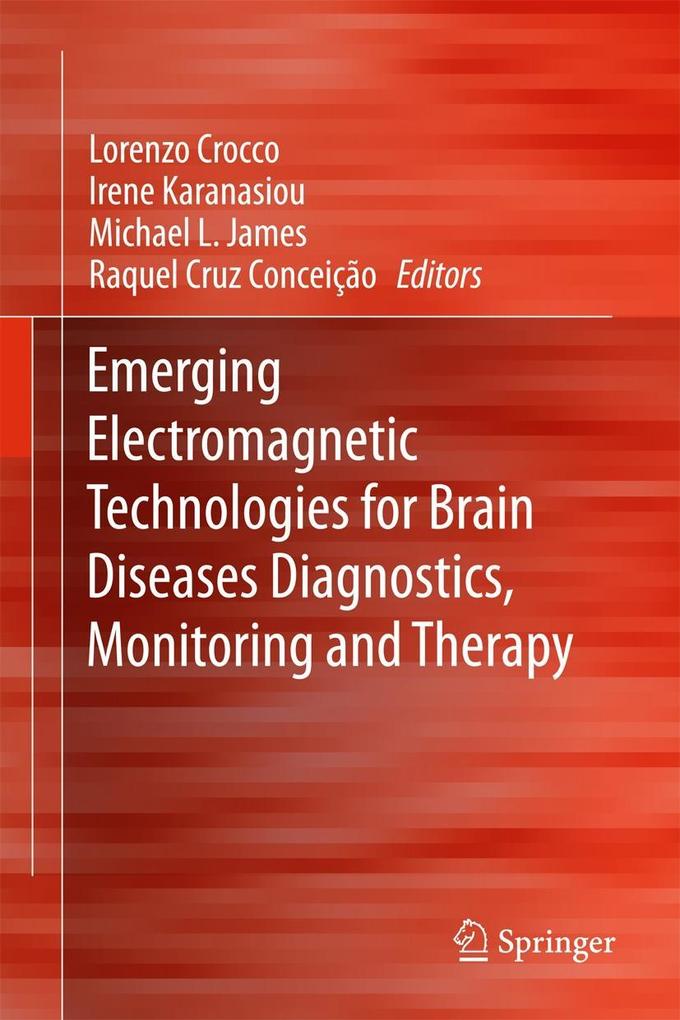 This timely book presents innovative technologies for use in the diagnosis, monitoring, and treatment of brain disease. These technologies offer exciting possibilities in the medical field owing to their low-cost, portability and safety.

This timely book presents innovative technologies for use in the diagnosis, monitoring, and treatment of brain disease. These technologies offer exciting possibilities in the medical field owing to their low-cost, portability and safety.

The authors address cerebrovascular diseases such as stroke, ischemia, haemorrhage, and vasospasm, these diseases having an ever-increasing societal relevance due to the global ageing population. The authors describe the potential of novel techniques such as microwave imaging and present innovative modalities for treatment of brain tumours using electromagnetic fields and nano-composites, as well as for monitoring brain temperature during surgery. Finally, Emerging Electromagnetic Technologies for Brain Diseases Diagnostics, Monitoring and Therapy addresses the perspectives which arise from multi-modal multi-spectral EM modalities, which make a synergic use of the different portions of the electromagnetic spectrum.

This text will be of interest to readers from various different areas, given the fundamental interdisciplinarity of the subject matter. This includes researchers or practitioners in the field of electrical engineering, applied physicists, and applied mathematicians working on imaging applications for biomedical and electromagnetic technologies. Neurologists and radiologists may also find this book of interest, as may graduate students in these areas.

Lorenzo Crocco received his Laurea degree (summa cum laude) in Electronic Engineering and his Ph.D. degree in Applied Electromagnetics from the University of Naples Federico II, Naples, Italy, in 1995 and 2000 respectively. In 2001, he joined the Institute for Electromagnetic Sensing of the Environment, National Research Council of Italy (IREA-CNR), Naples, Italy, where he is currently Senior Researcher (since 2010). In 2009-2011, he was an Adjunct Professor with Mediterranea University of Reggio Calabria, Italy, where he is currently a Member of the Board of Ph.D. advisers. In 2014, he was habilitated Professor of Electromagnetic Fields, by the Italian Ministry of Research and University. Since 2013, he has been a lecturer for the European School of Antennas (ESOA). Currently, he is a member of the Management Committee of the European Cooperation in Science and Technology (COST) Action TD1301 on microwave medical imaging. His scientific interests are focused on the development of new methodologies and modelling tools for non-invasive electromagnetic diagnostics, subsurface imaging via ground penetrating, borehole and airborne radars, microwave imaging for medical diagnostics, possibly exploiting contrast agents, as well as on the synthesis of optimal exposure systems for therapeutic uses of electromagnetic fields. With respect to these topics, he has authored or co-authored more than 70 papers in peer reviewed international journals and has been principal investigator or team coordinator for CNR-IREA in several research projects, as well as guest editor of special issues in international peer-reviewed journals. He has co-chaired the IV International Workshop on Advanced Ground Penetrating Radar and the International Conference on GPR in 2012. Moreover, he has convened and organised special sessions and workshops at international conferences (PIERS, IGARSS, EuCAP, EuMW). Dr. Crocco is a Fellow of The Electromagnetics Academy (TEA). He was the recipient of the Barzilai Award for Young Scientists from the Italian Electromagnetic Society (2004) and Young Scientist Awardee at the XXVIII URSI General Assembly (2005). In 2009, he was awarded one of the top young (under 40) scientists of CNR.
rene S. Karanasiou was born in Athens, Greece. She received her Diploma and her Ph.D. degree in Electrical and Computer Engineering from the National Technical University of Athens (NTUA), Athens, in 1999 and 2003, respectively. Since 1999, she has been a Researcher with the Microwave and Fiber Optics Laboratory (MFOL), NTUA and recently she was elected Associate Professor at the Hellenic Military University. She has authored or co-authored more than 140 papers in refereed international journals and conference proceedings. She was the Member of the organising and technical committees of more than 20 International Conferences including IEEE conferences. She has participated in more than 24 funded National and European research projects. Her current research interests include biomedical imaging techniques, medical informatics, bio-electromagnetism, and applications of microwaves in therapy and diagnosis. She is also working in the field of Electroencephalography (EEG), Evoked Potentials (ERPs) and Computational Neuroscience, Functional Brain Imaging (fMRI) and recently Terahertz Technology and Imaging. Dr. Karanasiou is a founding member of the IEEE Engineering in Medicine and Biology Society (EMBS) Greek Chapter and member of the Technical Chamber of Greece. She was the recipient of the Thomaidio Foundation Award for her doctoral dissertation (2004) and three academic journal publications.

Raquel Cruz Conceição was born in Lisbon, Portugal. She is an Invited Assistant Professor at Faculdade de Ciências, Universidade de Lisboa, Portugal, and Postdoctoral Computer Scientist/Biomedical Engineer at the Department of Oncology at the University of Oxford, United Kingdom. She holds a PhD in Electrical and Electronic Engineering from the National University of Ireland Galway and a Masters in Biomedical Engineering from Universidade Nova de Lisboa, received in 2011 and 2007, respectively. She has 8 years of research experience on the topic of Microwave Imaging, developing techniques to detect and classify breast cancer, and she is the Editor of a title in Springer's book series in Biological and Medical Physics, Biomedical Engineering: An Introduction to Microwave Imaging for Breast Cancer Detection. She is the chair of COST Action TD1301 (Microwave Medical Applications, MiMed), and organises bi-annual meetings for over 200 research and medical participants from 30 countries. She has secured several research grants since 2005, most significantly a FP7 Marie Curie Intra European Fellowship. She has supervised and mentored 14 Master and PhD students, published 15 journal papers and 26 conference papers, co-authored with over 50 international researchers, acted as reviewer for over 20 journals and conferences, and is Associate Editor for Medical Physics. Also, she has been awarded the ANACOM URSI Portugal prize in 2013 and URSI Young Scientist in 2014, among other 10 prizes and awards.
Michael L. "Luke" James is board-certified in anaesthesiology, neurology, vascular neurology, and neurocritical care at Duke University MC, NC. While pursuing an active and productive research career, his clinical time is spent attending in the neuroscience critical care unit and providing anaesthesia for complex neurosurgical procedures. As a clinician-scientist, he is uniquely qualified to function as a facilitator for translating promising therapeutic strategies for patients with acute brain injuries from the lab into the clinical research arena. As a founding member of the Brain Injury Translational Research Centre, Dr. James is able to provide a background in which to incorporate his clinical research interests including proteo-genomic interactions after traumatic brain injury and intracerebral haemorrhage. He is specifically interested in the effects of sex and gonadal hormones on recovery and their role in modulating acute inflammation after acute CNS injury. Dr. James is the associate director of the Multidisciplinary Neuroprotection Laboratories (MNL) at Duke. Investigators in the MNL use a number of different preclinical in vivo and in vitro models to evaluate neuroinflammation and neurobehavioural recovery after acute CNS injuries, including stroke, spinal cord injury, hypoxic-ischemic injury, global ischemia, subarachnoid haemorrhage, intracerebral haemorrhage, spinal cord injury, and traumatic brain injury. While he has evaluated several potentially translatable therapeutics in the past, Dr. James's utilises a number of in vitro and in vivo models, as well as transgenic systems, to discover sex-specific inflammation and recovery patterns after intracerebral haemorrhage to discover targets for therapeutic development.