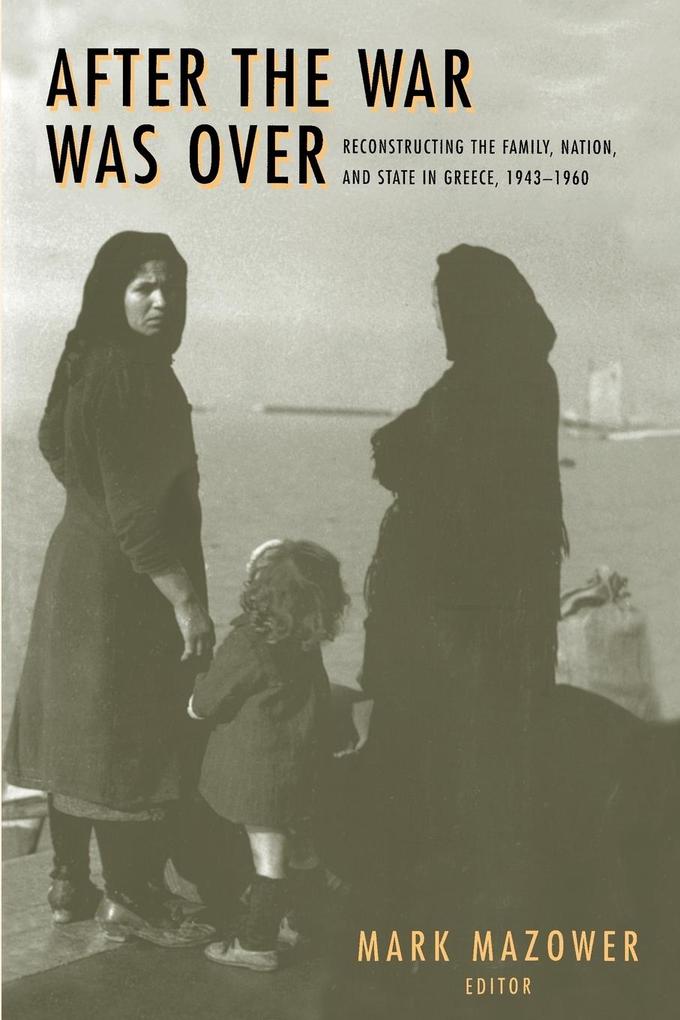 After the War Was Over

Reconstructing the Family, Nation, and State in Greece, 1943-1960. Paperback. Sprache: Englisch.
Taschenbuch
This volume makes available some of the most exciting research currently underway into Greek society after Liberation. Together, its essays map a new social history of Greece in the 1940s and 1950s, a period in which the country grappled--bloodily--w … weiterlesen
Geschenk per Mail versenden
Taschenbuch

Titel: After the War Was Over

This volume makes available some of the most exciting research currently underway into Greek society after Liberation. Together, its essays map a new social history of Greece in the 1940s and 1950s, a period in which the country grappled--bloodily--with foreign occupation and intense civil conflict.

Extending innovative historical approaches to Greece, the contributors explore how war and civil war affected the family, the law, and the state. They examine how people led their lives, as communities and individuals, at a time of political polarization in a country on the front line of the Cold War's division of Europe. And they advance the ongoing reassessment of what happened in postwar Europe by including regional and village histories and by examining long-running issues of nationalism and ethnicity. Previously neglected subjects--from children and women in the resistance and in prisons to the state use of pageantry--yield fresh insights.

By focusing on episodes such as the problems of Jewish survivors in Salonika, memories of the Bulgarian occupation of northern Greece, and the controversial arrest of a war criminal, these scholars begin to answer persistent questions about war and its repercussions. How do people respond to repression? How deep are ethnic divisions? Which forms of power emerge under a weakened state? When forced to choose, will parents sacrifice family or ideology? How do ordinary people surmount wartime grievances to live together?

Abbreviations and Glossary of Terms ix
Introduction by Mark Mazower 1
Chapter One Three Forms of Political Justice: Greece, 1944-1945 by Mark Mazower 24
Chapter Two The Punishment of Collaborators in Northern Greece, 1945-1946 by Eleni Haidia 42
Chapter Three Purging the University after Liberation by Procopis Papastratis 62
Chapter Four Between Negation and Self-Negation: Political Prisoners in Greece, 1945-1950 by Polymeris Voglis 73
Chapter Five Children in Turmoil during the Civil War: Today's Adults by Mando Dalianis and Mark Mazower 91
Chapter Six Left-Wing Women between Politics and Family by Tassoula Vervenioti 105
Chapter Seven The Impossible Return: Coping with Separation and the Reconstruction of Memory in the Wake of the Civil War by Riki van Boeschoten 122
Chapter Eight Red Terror: Leftist Violence during the Occupation by Stathis N. Kalyvas 142
Chapter Nine The Civil War in Evrytania by John Sakkas 184
Chapter Ten The Policing of Deskati, 1942-1946 by Lee Sarafis 210
Chapter Eleven Protocol and Pageantry: Celebrating the Nation in Northern Greece by Anastasia Karakasidou 221
Chapter Twelve "After the War We Were All Together": Jewish Memories of Postwar Thessaloniki by Bea Lewkowicz 247
Chapter Thirteen Memories of the Bulgarian Occupation of Eastern Macedonia: Three Generations by Xantbippi Kotzageorgi-Zymari with Tassos Hadjianastassiou 273
Chapter Fourteen "An Affair of Politics, Not Justice": The Merten Trial (1957-1959) and Greek-German Relations by Susanne-Sophia Spiliotis 293
List of Contributors 303
Index 305

This excellent collection of first-rate case studies is not only a significant contribution to the history of Greece but is of serious value to anyone interested in the comparative study of occupation and civil war, as well as reconciliation and reconstruction.

Schreiben Sie eine Bewertung für: After the War Was Over