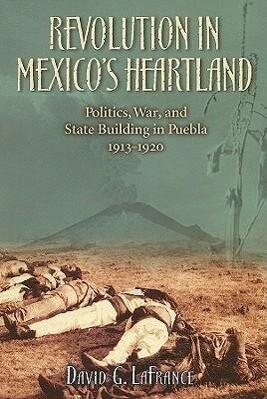 von David G. LaFrance
Politics, War, and State Building in Puebla, 1913-1920. illustrations. Sprache: Englisch.
Taschenbuch
This carefully researched and richly detailed case study explores the most violent phase of the Mexican Revolution in the key state of Puebla. This book explains the tension between the forces that represented the modernizing centralized state and th … weiterlesen
Geschenk per Mail versenden
Taschenbuch

This carefully researched and richly detailed case study explores the most violent phase of the Mexican Revolution in the key state of Puebla. This book explains the tension between the forces that represented the modernizing centralized state and those who revolted and chose local autonomy. Because of its industry, resources, transportation, and large population during the Revolution, Puebla provides an excellent measuring stick for the rest of the nation during this conflict. David G. LaFrance examines politics, warfare, and state building within the context of autonomy, as well as the military, political, and economic changes that occurred in the name of the Revolution.

In this comprehensive, impressively researched study, LaFrance examines and analyzes the complex changes brought by the Mexican Revolution to the state of Puebla. Recommended. CHOICE Revolution in Mexico's Heartland meticulously examines the struggle for local autonomy in both the countryside and the cities. The Historian A very good book, one of the best histories of the Mexican Revolution ever on the state and local levels, where it was most significant. Based on research in fifty-four archives, the book is thorough, solid, and judicious. Considering the complexity and importance of the state of Puebla, it is wonderfully clear as well. This volume's argument will interest and enlighten all historians of the Revolution and any student who seriously wants to learn what the Revolution meant. -- John Womack, Jr., Harvard University A lucidly written, comprehensive study of the Mexican Revolution in the state of Puebla, where agrarian, liberal, labor, and serrano movements intersected with national revolutionary factions seeking to control and subdue this historically strategic region. If any romantic illusions linger as to the Revolution's 'good guys,' this book buries them with dispassionate empirical and analytical rigor and sympathy for the human compromises made in times of fratricidal warfare and mounting scarcity. The study is also essential for those interested in postrevolutionary state formation. -- Mary Kay Vaughan, University of Maryland, College Park, author of Cultural Politics in Revolution The research behind this work is vast and exhaustive. LaFrance has scoured newspapers and archives, leaving no page unturned. The result is a well-written, well-organized (with good subheadings), and incredibly detailed vision of political factions and squabbles in Puebla between 1913 and 1920. American Historical Review David LaFrance's study provides us with an outstanding description and analysis of the second military phase of the Revolution and of the earliest years of the postrevolutionary Mexican state in Puebla, a region at the center of contending old regime and revolutionary powers. -- Linda B. Hall, University of New Mexico David LaFrance has written an important history of the Mexican Revolution. His painstaking and in-depth research reveals the complexity of the Revolution and its regional variations. This book is must reading for Mexican historians. -- John Mason Hart, University of Houston Regional history at its very best. After Revolution in Mexico's Heartland, historians of the Mexican Revolution at the regional and national levels will have to rethink the idea of the popular, grassroots revolution and reexamine the anti-paradigm of local and regional autonomy and defensive rebellion. -- Thomas Benjamin, Central Michigan University A carefully researched and detailed study of the most violent phase of Mexican Revolution in the key state of Puebla. This book explains the tension between the forces that represented the modernizing centralized state and those who revolted and chose local autonomy. Hispanic Outlook