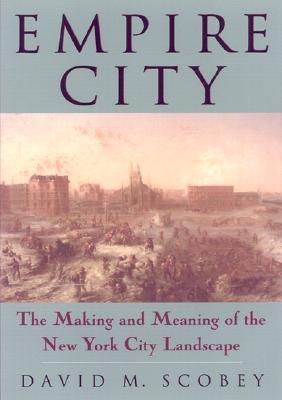 Empire City: The Making and Meaning of the New York City Landscape

New York's metamorphosis from compact part to modern metropolis occurred during the mid-nineteenth century. "Empire City tells the story of the dreams that inspired the changes in the landscape and the problems that eluded solution. Author David Scobey paints a remarkable panorama of New York's uneven development, a city-building and speculative excess. Envisioning a new kind of national civilization, "bourgeois urbanists' attempted to make New York the nation's pre-eminent city. Ultimately, they created a masaic of grand improvements, dynamic change, and environmental disorder. "Empire City sets the stories of the city's most celebrated landmarks--Central Park, the Brooklyn Bridge, the downtown commercial center--within the context of this new ideas of landscape design and a politics of planned city building. Perhaps such an ambitious project for guiding growth, overcoming spatial problems, and uplifting public was bound to fail; still, it grips the imagination.

Acknowledgments Introduction: Can a City Be Planned? Bryant's Questions City Building Urbanism City and Nation 1. Metropolis and Nation Saint Olmsted and Frederick the Great Allegories of the National Cityscape The American Metropolis The Class World of Bourgeois Urbanism The Meanings of Empire Olmsted's Return 2. The Midcentury Boom The American Museum Overview of a Boom Terminals and Tenements The Eternal Building Up and Pulling Down May Day 3. The Rule of Real Estate Myth of Origins The Landscape of Accumulation The Discipline of Land Values The March of Improvement The Logic of the Grid Dreamland 4. The Frictions of Space Uneven Development Arterial Sclerosis Modernization and Its Discontents Boundaries and Boundarilessness The New Urbanism 5. Imagining the Imperial Metropolis Imagined Prospects The Bridge Between Capital and Culture Eros and Civilization Second Empire Disciplining the Streets Urbane Domesticity Melodrama 6. The Politics of City Building The Emperor of New York Best Men, Businessmen, and Boosters City Building and State Building City Blocs The Politics of Stewardship The Modern Prince 7. Uptownutopia Overruling the Grid Inside Out: The Paradoxes of Central Park An Urbanism of the Periphery Cheap Trains and Cottage Suburbs The Uptown Prospect 8. The Failure of Bourgeois Urbanism The Meanings of Reconstmction The Legacies of Bourgeois Urbanism The End of the Boom and the Politics of Retrenchment The Battle for the Annexed District The March of Improvement, 1890 Appendix: Statistical Tables Notes Index

"The author of this study has written a graceful, tightly argued monograph that will appeal to all who are interested in the relationships among urban history, architecture, and landscape." The Historian "Exhaustively researched, beautifully written, and powerfully argued... Empire City will influence the theories and histories of urban geographers, historians, sociologists, and cultural theorists alike." --George Chauncey, University of Chicago, author of Gay New York "Lucidly written, deeply researched and thought through, Empire City zooms to the front rank of books about nineteenth century New York. Scobey examines the way real estate boosters, visionary reformers, business elites and Tammany politicos reshaped Gotham's cityscape, for good and ill. His analytical approach both illuminates a particular era, and provides a powerful general model for examining other times, other places." --Mike Wallace, co-author of Pulitzer-Prize winning Gotham: A History of New York "What made New York? In David Scobey's deft and deeply meditated account, it is not the blind forces of modernization nor the overarching will of an Haussman, but the complex interplay of interests, values and ideas--and above all the grandiose city--and nation-building aspirations of the 'bourgeois urbanists' of the 1860s and 70s. Scobey's New York is both a supremely self-conscious project--a 'mission civilatrice,' as he writes--and the battleground for the conflicting political, economic and social ambitions of an emergent world-city. This is a book for anyone who cares about cities--their future as well as their past." --James Traub, contributing writer for The New York Times Magazine and author of City On A Hill: Testing The America Dream At City College "Scobey has written a brilliant, evocative account of New York on the brink of economic and social chaos." --Journal of American History "Scobey's study is a significant contribution to literature in several fields... Perhaps most useful is Scobey's willingness to employ the lens of political economy to dissect the process of urbanization." --History: Review of New Books "It is best to treat [the book] not as a work of urban theory, but as a powerfully written (and very well illustrated) analysis of the specificities of class formation, class conflict and urban culture in the making of modern Manhattan." --Cultural Geographies "Scobey obviously understands buildings, but his larger interests lie in the economic forces, political trends, and cultural values that together determine what buildings and supporting infrastructure will be built where, when and for the benefit of whom...One cannot help, after reading Empire City, feeling a bit of nostalgia for the idealism and broad geographic mindedness of New York's nineteenth-century urbanists. Historical Geography

Taschenbuch
Presenting the Past: Essays on History…
von Roy Rosenzweig