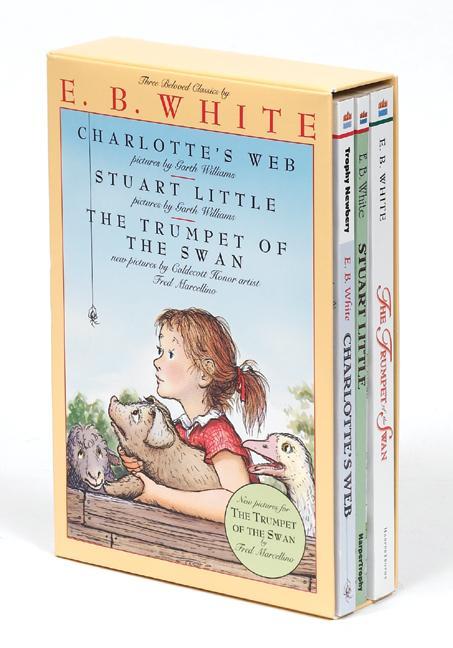 This box set contains paperback editions of the Newbery Honor-winning Charlotte's Web, the Laura Ingalls Wilder Medal-winning Stuart Little, and The Trumpet of the Swan—three beloved, timeless classics by E. B. White, with black-and-white illustrations by Garth Williams and Fred Marcellino.
Charlotte's Web
Some Pig. Humble. Radiant. These are the words in Charlotte's web, high up in Zuckerman's barn. Charlotte's spiderweb tells of her feelings for a little pig named Wilbur, who simply wants a friend. They also express the love of a girl named Fern, who saved Wilbur's life when he was born the runt of his litter. E. B. White's Newbery Honor Book is a tender novel of friendship, family, and adventure.
Stuart Little
Stuart Little is no ordinary mouse. Born to a family of humans, he lives in New York City with his family. But when Stuart's best friend goes missing, he's determined to leave home and take an epic journey to find his friend.
The Trumpet of the Swan
Louis is a trumpeter swan, but unlike the rest of his family, he can't make a sound. And since he can't trumpet his love, the beautiful swan Serena pays no attention to him. But when his father steals him a real brass trumpet, Louis has to find out if it's the key to what he's wanted all along. E. B. White's classic book is a tender novel of overcoming the odds and learning to do things on your own terms.

E. B. White, the author of such beloved classics as Charlotte's Web, Stuart Little, and The Trumpet of the Swan, was born in Mount Vernon, New York. He graduated from Cornell University in 1921 and, five or six years later, joined the staff of The New Yorker magazine, then in its infancy. He died on October 1, 1985, and was survived by his son and three grandchildren.
Mr. White's essays have appeared in Harper's magazine, and some of his other books are: One Man's Meat, The Second Tree from the Corner, Letters of E. B. White, Essays of E. B. White, and Poems and Sketches of E. B. White. He won countless awards, including the 1971 National Medal for Literature and the Laura Ingalls Wilder Award, which commended him for making a "substantial and lasting contribution to literature for children."
During his lifetime, many young readers asked Mr. White if his stories were true. In a letter written to be sent to his fans, he answered, "No, they are imaginary tales . . . But real life is only one kind of life—there is also the life of the imagination."