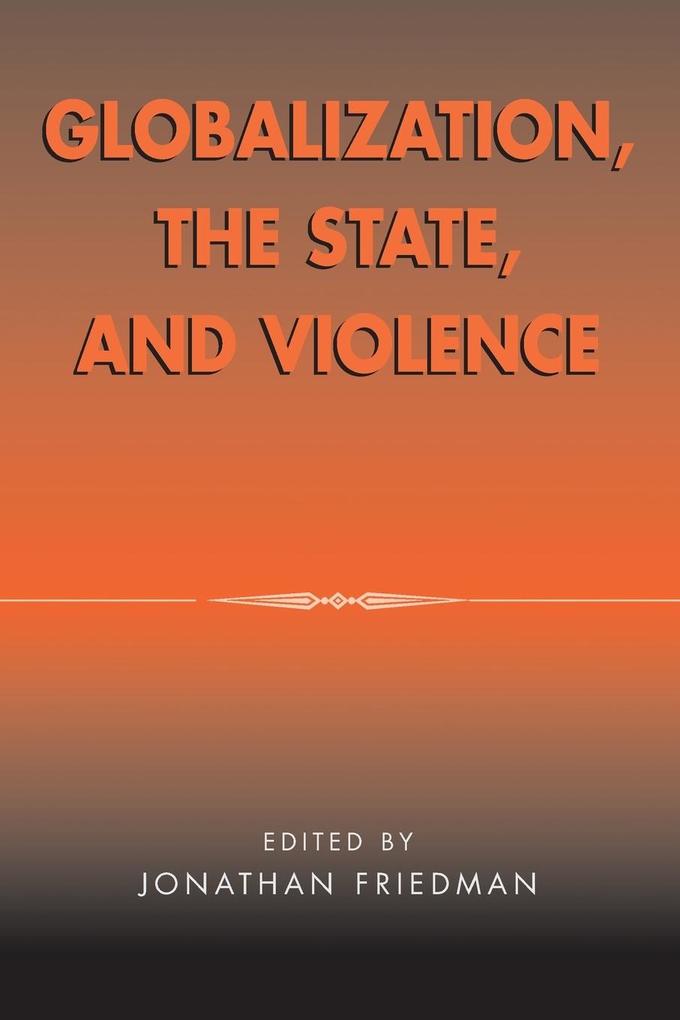 Globalization, the State, and Violence

Titel: Globalization, the State, and Violence

Friedman and a distinguished group of contributors offer a compelling analysis of globalization and the lethal explosiveness that characterizes the current world order. In particular, they investigate global processes and political forces that determine networks of crime, commerce and terror, and reveal the economic, social and cultural fragmentation of transnational networks. In a critical introduction, Friedman evaluates how transnational capital represents a truly global force, but geographical decentralization of accumulation still leads to declining state hegemony in some areas and increasing hegemony in others. The authors examine the growth and increasing autonomy of indigenous populations, and the massively destabililizing effect of migration processes. They describe the rapid increase in criminalization of ethnic and immigrant groups as well as an increase in class stratification, creating new forms of social confrontation and violence. In addition to ethnic, identity-based conflict there are analyses of transnational criminal networks, which also represents disintegration of larger homogeneous territories or hierarchical orders. The authors ask us to reevaluate the dynamics of globalization-the contradictions of centralization and fragmentation around the world-as we discover how best to transform these conditions for the future. This research was originally funded by the Harry Frank Guggenheim Foundation. Globalization, the State and Violence will be a valuable reference in anthropology, social theory, international politics and economics, ethnic conflict, immigration, and economic history.

Chapter 1: Globalization, Dis-integration, Reorganization, the Transformations of Violence Part 1 Introduction Chapter 2: Class Projects, Social Consciousness, and the Contradictions of Globalization Chapter 3: Economic Globalization and the Redrawing of Citizenship Chapter 4: Beyond the Informal Economy: New Trends in Post-Fordist Transition Chapter 5: The New Paradigm of Violence Chapter 6: The Case for Citizenship as Social Contract: A Tale of Two Girls Chapter 7: American Neoliberalism, "Globalization" and Violence: Reflections from the United States and Southeast Asia Chapter 8: Killing Me Softly: Violence, Globalization, and the Apparent State Chapter 9: Sorcery and the Shapes of Globalization, Disjunctions and Continuities in Sri Lanka Chapter 10: Imagining Monsters: A Structural History of Warfare in Chad Chapter 11: "Trouble Spots": Projects, Bandits and State Fragmentation Chapter 12: State-Classes, the Logic of Rentier Power and Social Disintegration: Global Parameters and Local Structures of the Decline of the Congo

Jonathan Friedman's Globalization, the State, and Violence is one of the most recent attempts to make sense of the disparate global conditions that are the subject of globalization discourse... [It] stands on its own as a respectable and well-argued piece of research that makes a valid empirical contribution to globalization literature. -- Eric A. Heinze, University of Nebraska Perspectives on Political Science, Vol. 23, No.4, Fall 2003