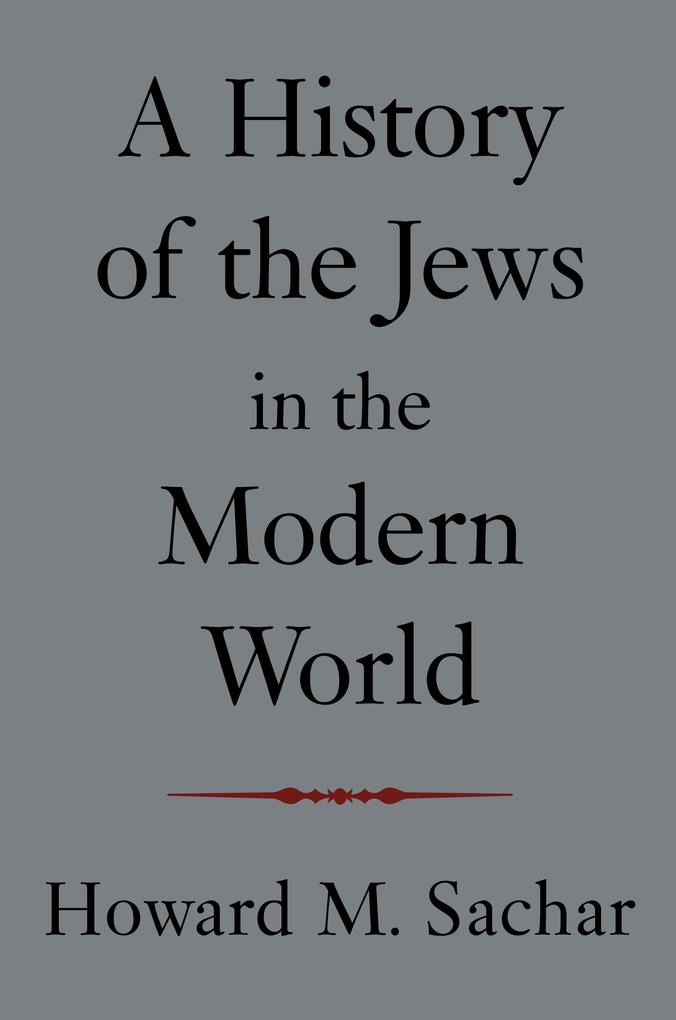 A History of the Jews in the Modern World

von Howard M. Sachar
Sprache: Englisch.
Taschenbuch
The distinguished historian of the Jewish people, Howard M. Sachar, gives us a comprehensive and enthralling chronicle of the achievements and traumas of the Jews over the last four hundred years.

Tracking their fate from Western Europe's age of merc … weiterlesen

Titel: A History of the Jews in the Modern World
Autor/en: Howard M. Sachar

The distinguished historian of the Jewish people, Howard M. Sachar, gives us a comprehensive and enthralling chronicle of the achievements and traumas of the Jews over the last four hundred years.

Tracking their fate from Western Europe's age of mercantilism in the seventeenth century to the post-Soviet and post-imperialist Islamic upheavals of the twenty-first century, Sachar applies his renowned narrative skill to the central role of the Jews in many of the most impressive achievements of modern civilization: whether in the rise of economic capitalism or of political socialism; in the discoveries of theoretical physics or applied medicine; in "higher” literary criticism or mass communication and popular entertainment.

As his account unfolds and moves from epoch to epoch, from continent to continent, from Europe to the Americas and the Middle East, Sachar evaluates communities that, until lately, have been underestimated in the perspective of Jewish and world history—among them, Jews of Sephardic provenance, of the Moslem regions, and of Africa. By the same token, Sachar applies a master's hand in describing and deciphering the Jews' unique exposure and functional usefulness to totalitarian movements—fascist, Nazi, and Stalinist. In the process, he shines an unsparing light on the often widely dissimilar behavior of separate European peoples, and on separate Jewish populations, during the Holocaust.

A distillation of the author's lifetime of scholarly research and teaching experience, A History of the Jews in the Modern World provides a source of unsurpassed intellectual richness for university students and educated laypersons alike.

I The Jew as Non-European

II A Glimmering of Dawn in the West

III An Ambivalent Emancipation in the West

V The Triumph of Emancipation in the West

VI Jews in an Emancipated Economy

VII The Impact of Western Culture on Jewish Life

IX The Rise of Jewish Life in America

X False Dawn in the East: Alexander II and the Era of "Enlightenment”

XI Russian Twilight: The Era of Pogroms and May Laws

XIII The Onset of Modern Antisemitism

XIV The Mutation of Racism

XV The Rise of Zionism

XVII Socialist "Internationalism” in Western Europe: The Trauma of World War I

XVIII The Triumph of Bolshevism

XIX The Balfour Declaration and the Jewish National Home

XX The Legacy of Progressivism: Immigrant Jewry in the United States

XXIII A Final Symbiosis of Jewish and Western Culture

XXV The Triumph of Nazism

XXVII The Holocaust of European Jewry

XXVIII The Final Solution and the Struggle for Jewish Survival

XXIX The Birth of Israel

XXXII The Jews of British Commonwealth

XXXIII A Latin Israel in the Southern Hemisphere

XXXIV The Efflorescence of American-Jewish Community

XXXVI Israel, the United States, and the Struggle for Soviet Jewry

Dr. Sachar received his undergraduate education at Swarthmore and took his graduate degrees at Harvard. He has taught Modern European, Jewish, and Middle Eastern history, and lived in the Middle East for six years, two of them on fellowship, the rest as founder-director of Brandeis University's Hiatt Institute in Jerusalem. Dr. Sachar has contributed to many scholarly journals, is the author of numerous books, and the editor of the thirty-ninevolume The Rise of Israel: A Documentary History. He serves as Charles E. Smith Professor of history at George Washington University, is a consultant and lecturer on Middle Eastern affairs for numerous governmental bodies, and lectures widely in the United States and abroad.

Schreiben Sie eine Bewertung für: A History of the Jews in the Modern World