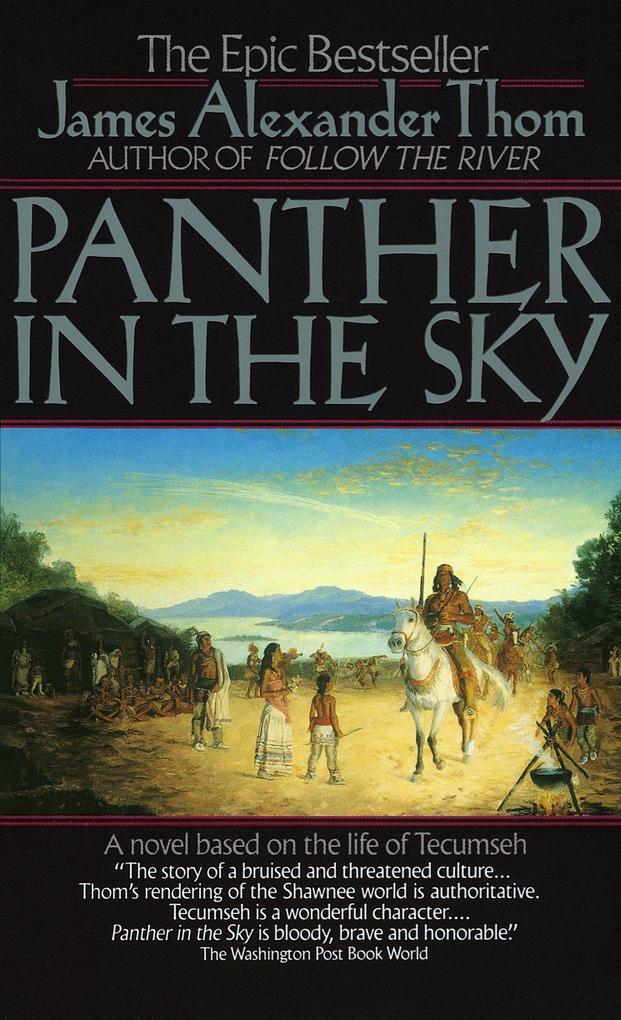 Panther in the Sky: A Novel Based on the Life of Tecumseh

Titel: Panther in the Sky: A Novel Based on the Life of Tecumseh
Autor/en: James Alexander Thom

Rich, colorful and bursting with excitement, this remarkable story turns James Alexander Thom's power and passion for American history to the epic story of Tecumseh's life and give us a heart-thumping novel of one man's magnificent destiny-to unite his people in the struggle to save their land and their way of life from the relentless press of the white settlers.

In 1768, when Turtle Mother gave birth to a strong baby boy in the heart of the Shawnee nation, a green-yellow shooting star streaked across the heavens. Hard Striker saw the unsoma, the birth sign, and named his son Tecumseh, meaning Panther in the Sky . . .

Praise for Panther in the Sky

"[James Alexander] Thom shows how, in honest, capable hands, fictionalized biography can add verisimilitude to the life and times of this extraordinary America. . . . The dialogue has the ring of reality about it. . . . Thom is able to get into the thoughts and emotions of his characters."-Dee Brown, Los Angeles Times

"The story of a bruised and threatened culture . . . Thom's rendering of the Shawnee world is authoritative. Tecumseh is a wonderful character. . . . Panther in the Sky is bloody, brave and honorable."-The Washington Post Book World

"Through Thom's masterful storytelling and his passion for Shawnee lore, customs and especially mysticism, you continually have the feeling that maybe, these simple, proud individuals can win back their land and have life go on as 'Our Grandmother,' that great spiritual force, intended."-Chicago Tribune

"A work of such sweep and compassion that it blurs the demarcation between novel and history . . . Totally admirable."-The Cincinnati Enquirer

"A brillinant job . . . meticulously researched . . . It is a detailed story of the almost mythical life of [Tecumseh] and that of the Shawnee of his time."-Kansas City Star

"A spellbinding novel about the life of Tecumseh . . . The book is almost epic in its scope. . . . Thom has carefully researched his facts. He has the care of a historian to go with the skills of the seasoned novelist."-The Indianapolis Star

"Riveting . . . Historical fiction at its finest."-Booklist

James Alexander Thom is the author of Follow the River, Long Knife, From Sea to Shining Sea, Panther in the Sky (for which he won the prestigious Western Writers of America Spur Award for best historical novel), Sign-Talker, The Children of First Man, and The Red Heart.

Schreiben Sie eine Bewertung für: Panther in the Sky: A Novel Based on the Life of Tecumseh