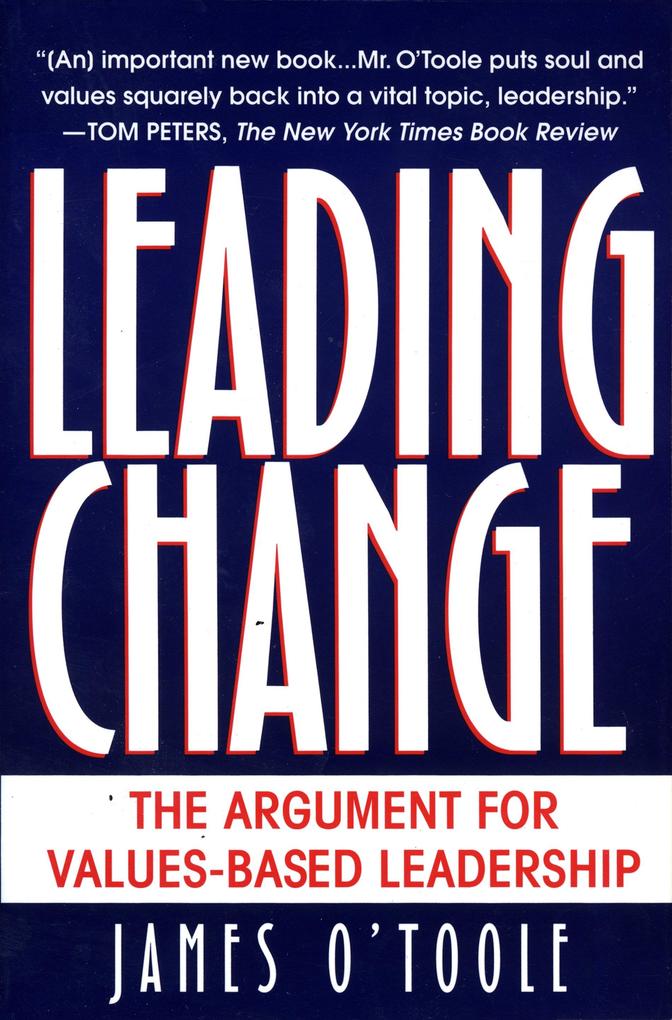 "A deeply philosophical and eminently practical study of leadership as change."
--James MacGregor B … weiterlesen

"A deeply philosophical and eminently practical study of leadership as change."
--James MacGregor Burns
Pulitzer Prize and National Book Award winner, and author of Leadership
Current management philosophy advocates an outmoded Machiavellian approach to running organizations: Leaders are told in countless books that they can only accomplish their goals by being tough, manipulative, dictatorial, or paternalistic as the situation requires.
In Leading Change, noted management theorist James O'Toole proposes a provocative new vision of leadership in the business world--a vision of leadership rooted in moral values and a consistent display of respect for all followers. As O'Toole brilliantly demonstrates, values-based leadership is not only fair and just, it is also highly effective in today's complex organizations.
When leaders truly believe that their prime goal is the welfare of their followers, they get results. The finest leaders--from political giants like Washington, Jefferson, and Lincoln to contemporary CEOs like Max De Pree and James Houghton--have always shared leadership with their followers. They create organizations that encourage change and self-reevaluation; they foster an atmosphere of open-mindedness and fresh thinking, in which assumptions can be challenged and goals reassessed.
Grounded in the ideas of moral philosophy, Leading Change powerfully transcends the standard how-to management primer to define a challenging new approach to leadership. As O'Toole so persuasively argues, growth and change are possible, indeed necessary, and they will be effected by individuals who have the stature and the courage to lead morally. This important book, at once thought-provoking and totally practical, is bound to take its place as one of the landmark business volumes of our times.
"Jim O'Toole has written the essential work for organizations to survive and thrive in today's changing world. His intellectually penetrating thinking shows us how the sometimes conflicting problems we wrestle with--often in piecemeal fashion--fit together to form a complete picture, even as the picture itself continues to change. His message is so critical to the very existence of every organization that any leader who fails to heed his advice condemns his or her company to mediocrity and/or early death. It's that basic."
--Warren Bennis
Professor and founding chairman of the Leadership Institute
at the University of Southern California
Author of An Invented Life and Why Leaders Can't Lead

James O'Toole is a graduate of Oxford University. He has held the University Associates' Chair of Management at USC, served as executive director of the Leadership Institute, and was the editor of New Management magazine. Between 1994 and 1997, he was the executive vice president of the Aspen Institute. He has been named one of the 100 most influential people in business ethics by Ethisphere and one of the top 100 thought leaders on leadership by Leadership Excellence magazine. He is the author of Leading Change: The Argument for Values-Based Leadership.