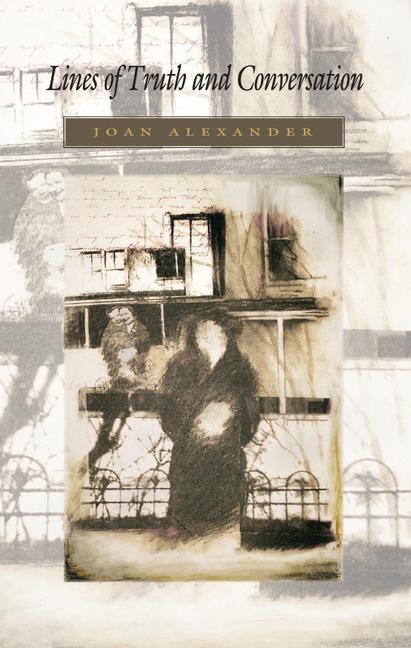 Lines of Truth and Conversation

von Joan Alexander
New. Sprache: Englisch.
Taschenbuch
Joan Alexander's stories are intelligent and sure-footed investigations of the darker sides of urban life. They begin with familiar situations -- the failure of a business, the death of a loved one, an affair that never gets physical -- but they char … weiterlesen
Geschenk per Mail versenden
Taschenbuch

Joan Alexander's stories are intelligent and sure-footed investigations of the darker sides of urban life. They begin with familiar situations -- the failure of a business, the death of a loved one, an affair that never gets physical -- but they chart the rough terrain of emotional trauma with unsettling precision. Many of the stories in "Lines of Truth and Conversation" deal in the pangs and pumellings of loss in all its guises, but Alexander has a gift for bittersweet humour, and even her most harrowing stories are lightened by a sense of the comic continuity of life.

Joan Alexander was born in Chicago, and moved to Canada in 1979, where she worked as a teacher and a journalist for many years while continuing to study the writing craft. Her work has appeared in a number of Canadian literary journals and has been nominated for the Journey Prize, a National Magazine Award, and Best New American Voices. She lives in Toronto and is working on a novel.

'A Hanukkah party becomes the bitter sweet setting for a stolen kiss. A midlife crisis manifests itself when a married woman falls for the man busy posturing -- in more ways than one -- on the neighbouring mat in her yoga class. A trio of connected characters struggle to come to grips with the beating death of an acquaintance/friend. The closing of a small bookstore, forced out of business by the newest mega-bookstore (with the brilliantly facetious name of Wonderment), becomes a metaphor for a larger sense of dislocation. Indeed, riding Wonderment's escalator, the protagonist "panicked, and felt tragedy, the way she did on highways and roller coasters and sometimes even in department stores." ' -- Heather Birrell Quill and Quire 'Joan Alexander's character-driven short fiction is peopled with overly possessive daughters-in-law, social-climbing rabbis, reluctant mothers and New Age hairdressers. Her poignant, stylish and witty stories are worthy of a Robert Altman film, or even Woody Allen at his most acerbic. ... I can't think of a fictional equivalent, and that's because her work is fresh, original and quirky enough to defy categorization. I cannot find any traces of Alice Munro, Carol Shields or Margaret Atwood here. In other words, Lines of Truth and Conversation is a stellar debut. Her stories are readable, her characters are finely honed and her wry sense of humour gives her too-realistic portraits the levity that all serious fiction requires.' -- Patricia Robertson Globe and Mail 20050611 'Flashes of quirky humour alleviate the essential darkness of these incisive, disquieting tales. ... Alexander's singular, forceful voice offers a welcome respite from the banal effusions that typify our celebrity-obsessed culture.' -- Sarah Robertson Canadian Book Review Annual '[The] Porcupine's Quill in Ontario makes books to last, with fine paper stock and pages stitched rather than glued. Porcupine's confidence in Joan Alexander's first book, Lines of Truth and Conversation, is well-placed: it's that rare mix of bravura writing and searing analysis. As the title makes clear, there's a divide between truth and talk. Talk in these stories is plentiful, riveting, with Alexander having a keen ear for the quirky, the pretentious, and the absurd; talk is often the vehicle her characters use to try out different personas and styles before they come back to reinhabit the selves they can't escape.' -- Kathleen Snodgrass Georgia Review 'The trauma faced by many of the protagonists in this anthology is extreme. What makes this author's writing powerful is the presentation of these deep-rooted complexities within her storytelling. Joan Alexander understands human suffering and, talented writer that she is, expresses it magnificently.' -- Atara Beck Jewish Tribune