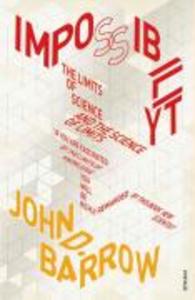 von John D. Barrow
The Limits of Science and the Science of Limits. facsimiles. Sprache: Englisch.
Taschenbuch
'If you are fascinated by the limits of knowledge, you will be richly rewarded by this book' New Scientist
Geschenk per Mail versenden
Taschenbuch

The Limits of Science and the Science of Limits.
facsimiles.
Sprache: Englisch.

What can we never do? Barrow looks at what limits there might be to human discovery, and what we might find, ultimately, to be unknowable, undoable, or unthinkable. Science is a big success story, but where will it end? And, indeed, will it end? Weaving together a tapestry of surprises, Barrow explores the frontiers of knowledge. We find that the notion of 'impossibility' has played a striking role in our thinking. Surrealism, impossible figures, time travel, paradoxes of logic and perspectives - all stimulate us to contemplate something more than what is. Using simple explanations, it shows the reader that impossibility is a deep and powerful notion; that any Universe complex enough to contain conscious beings will contain limits on what those beings can know about their Universe; that what we cannot know defines reality as surely as what we can know.

John D. Barrow is Professor of Mathematical Sciences and Director of the Millennium Mathematics Project at Cambridge University, Fellow of Clare Hall, Cambridge, a Fellow of the Royal Society, and the current Gresham Professor of Geometry at Gresham College, London. His principal area of scientific research is cosmology, and he is the author of many highly acclaimed books about the nature and significance of modern developments in physics, astronomy, and mathematics, including The Origin of the Universe, The Universe that Discovered Itself; The Book of Nothing, The Constants of Nature, The Infinite Book: a Short Guide to the Boundless, Timeless and Endless, The Artful Universe Expanded, New Theories of Everything, Cosmic Imagery and, most recently, The Book of Universes.

"Barrow conducts a tour of many of the most interesting topics in recent popular science, giving most of them a new twist in the telling... Trying to improve our understanding of just what is possible, and what is not, seems a vital part of the enterprise our kind of consciousness has called science" Financial Times
Kunden, die diesen Artikel gekauft haben, kauften auch
Schreiben Sie eine Rezension