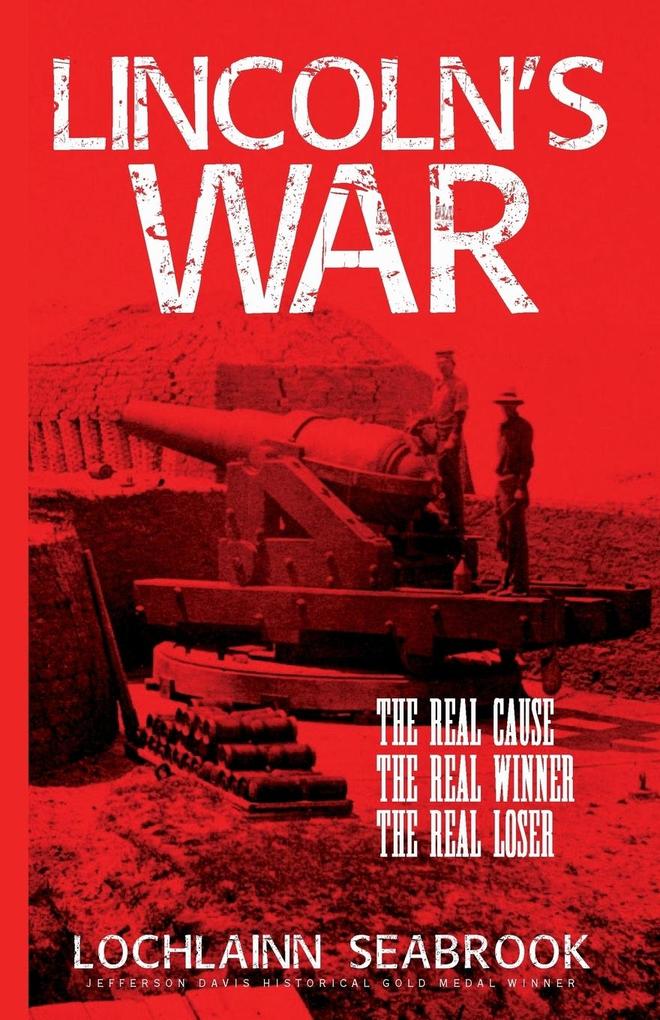 von Lochlainn Seabrook
The Real Cause, the Real Winner, the Real Loser. Paperback. Sprache: Englisch.
Taschenbuch
If you believe that the American Civil War was fought over slavery, and that the "North won" and the "South lost," if you think that Abraham Lincoln was a conservative Republican who "freed the slaves" and that Jefferson Davis was a liberal Democrat … weiterlesen
Dieser Artikel ist auch verfügbar als:
Geschenk per Mail versenden
Taschenbuch

The Real Cause, the Real Winner, the Real Loser.
Paperback.
Sprache: Englisch.

If you believe that the American Civil War was fought over slavery, and that the "North won" and the "South lost," if you think that Abraham Lincoln was a conservative Republican who "freed the slaves" and that Jefferson Davis was a liberal Democrat who tried to "preserve slavery," then you've been completely misled by the mainstream media and by our left-leaning education system.


Read the most important Civil War book in decades, Lincoln's War: The Real Cause, the Real Winner, the Real Loser, by award-winning historian and Civil War scholar Colonel Lochlainn Seabrook and learn the truth about the Great Conflict of 1861; a truth that overturns all of the lies, slander, revisionist history, Yankee myths, and South-shaming propaganda invented by progressives in an effort to continue the humiliation of conservative Dixie and her people.


This seminal work, the first ever to expose the authentic facts about Civil War era Republicans and Democrats, the true origins of the War, and who really won and lost, will finally clarify the illogical and often confusing conventional view of the conflict. Who could seriously believe, for example, that millions of men, women, and children (on both sides) risked their lives to destroy or save slavery? And who can honestly accept the idea that Lincoln was justified in killing countless thousands and bankrupting the U.S. Treasury to "preserve the Union," or that Davis purposefully turned 8 million Southerners into "traitors" to prove that secession was legal? No wonder the story of the Liberals' war on the Constitution has been incomprehensible - until now!


Thoroughly researched, historically accurate, and packed with hundreds of once suppressed eyewitness testimonies, Colonel Seabrook's richly illustrated, highly original work is the only one you'll ever need for a total understanding of America's bloody contest between conservatism and liberalism. Lincoln's War, which includes extensive notes, a bibliography, and an index, renders every mainstream history book obsolete, and is a must-read for any serious Civil War or history buff. Destined to become a literary classic, this is the first and only book that makes complete sense of this tragic fratricidal conflict! Available in paperback and hardcover.


Civil War scholar Lochlainn Seabrook, a descendant of the families of Alexander H. Stephens, John S. Mosby, and William Giles Harding, is the most prolific and popular pro-South writer in the world today. Known as the "new Shelby Foote," he is a recipient of the prestigious Jefferson Davis Historical Gold Medal and the author of over 50 books that have introduced hundreds of thousands to the truth about the War for Southern Independence. A seventh-generation Kentuckian of Appalachian heritage and the sixth great-grandson of the Earl of Oxford, Colonel Seabrook has a forty-year background in American and Southern history, and is the author of the international blockbuster Everything You Were Taught About the Civil War is Wrong, Ask a Southerner!


His other titles include: The Great Yankee Coverup: What the North Doesn't Want You to Know About Lincoln's War; Confederacy 101: Amazing Facts You Never Knew About America's Oldest Political Tradition; Confederate Flag Facts: What Every American Should Know About Dixie's Southern Cross; Women in Gray: A Tribute to the Ladies Who Supported the Southern Confederacy; Everything You Were Taught About American Slavery is Wrong, Ask a Southerner!; Honest Jeff and Dishonest Abe: A Southern Children's Guide to the Civil WarThe Constitution of the Confederate States of A

A former zoo keeper, ranch hand, and hunting guide, Lochlainn Seabrook is an award-winning writer-naturalist, historian, and outdoor photographer. One of the world's most prolific and multifaceted writers, his 67 books range in scope from science and nature to history and religion. He is the author of the international bestseller, "The Concise Book of Owls: A Guide to Nature's Most Mysterious Birds" (endorsed by the World Bird Sanctuary, St. Louis, Missouri).