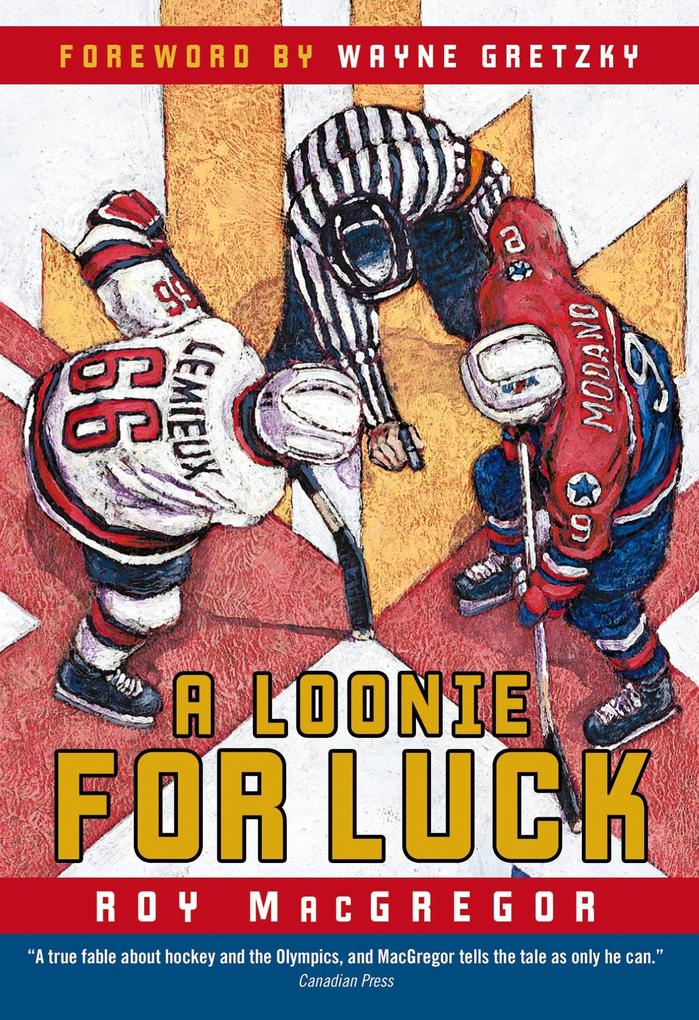 A Loonie for Luck

von MacGregor
Empfohlen von 8 bis 12 Jahren. Sprache: Englisch.
Taschenbuch
In February 2002, the greatest hockey teams this country could muster headed to Salt Lake City to compete in the Winter Olympics. Our men and women hoped to go all the way to the finals, but it had been fifty long years since the Canadians had won Ol … weiterlesen
Geschenk per Mail versenden
Taschenbuch

In February 2002, the greatest hockey teams this country could muster headed to Salt Lake City to compete in the Winter Olympics. Our men and women hoped to go all the way to the finals, but it had been fifty long years since the Canadians had won Olympic gold. In the past, they had come close - it was just that luck always seemed to be against them.

This time, however, their chances to end the long drought were good. The women looked set for a medal - although the all-powerful American team stood between them and the ultimate prize. The Canadian men faced strong opponents, too, but prospects were good for the all-star team assembled by the great Wayne Gretzky. And this time, both teams had a secret weapon. So secret, in fact, they didn't even know it existed. At first.


Like all good secrets this one was too good not to pass along. Under the surface at centre ice, Trent Evans had hidden a Canadian loonie. The expert ice maker had been invited down from Edmonton to help install the ice for the Games, and this was his little good-luck charm for our Olympic hockey teams. Perhaps, he figured, the guys could use some "home ice” advantage.

A Loonie for Luck is the true story of that loonie and the magic it wove at Salt Lake City. It follows Wayne Gretzky, Trent Evans, and the men's and women's teams through their time at the Games. And it pays tribute to the role of superstition and chance in hockey - a part of the sport not always acknowledged, but one that brings real magic to the game.

With the close co-operation of Wayne Gretzky and Trent Evans, Roy MacGregor tells the inside story of how the coin came to be in Trent Evans' pocket and then buried under centre ice. He tells how, throughout the Games, the loonie was in danger of being uncovered as the secret began to spread, and how, as the tournament progressed, with the players in need of every break they could get, the good luck miraculously held.

This true story, brilliantly illustrated by Bill Slavin, is full of suspense, humour, and charm. It will delight every Canadian who felt a surge of pride for our athletes at Salt Lake City.

Wayne Gretzky, also known as The Great One, was the executive director of the Canadian men's hockey team at the Olympic Winter Games in Salt Lake City, 2002. It was his idea, with Trent Evans, to turn this story into a book by Roy MacGregor.

Roy MacGregor is Canada's greatest hockey writer. His books include the bestsellers Home Game (with Ken Dryden), The Home Team, shortlisted for the 1996 Governor General's Award, and A Life in the Bush. He is also a bestselling children's author with the Screech Owls series of hockey-themed mysteries, which has more than a million copies in print in Canada. His latest work of adult non-fiction is Escape: In Search of the Natural Soul of Canada.

Bill Slavin's passion has always been illustration. Primarily in pen and ink and watercolour, his work encompasses both children's picture books and non-fiction illustration. Among the more than fifty books illustrated by Bill Slavin are Rosie Backstage, The Cat Came Back, The Stone Lion, The Hunchback of Notre Dame, and The Big Book of Canada.