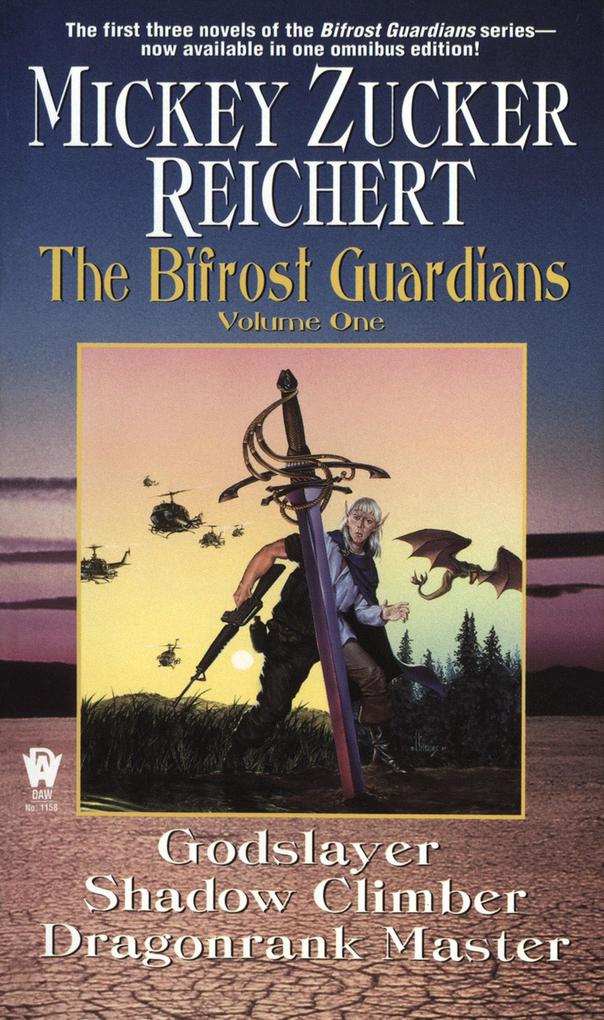 The Bifrost Guardians: Volume One

Godslayer: Torn away from the midst of firefight in Vietnam and catapulted to a time and pla … weiterlesen

Now in one volume, the first three novels in the startlingly original Bifrost Guardians series: an epic saga of a Vietnam soldier sent through time and space.

Godslayer: Torn away from the midst of firefight in Vietnam and catapulted to a time and place where the Norse gods fight a deadly war of their own, Al Larson finds himself locked into an elvish body on a world where swords and spells are the means of battle. Al must adapt swiftly or die. For the gods have marked him as their own private battleground, and Al's only chance rests in completing the quest Freyr has set him, a quest that will lead him to the very gates of Hel, where he must save a god-or destroy one.

Shadow Climber: Taziar Medakan is the Shadow Climber, skilled at remaining one with the shadows, unseen in the midst of his enemies. But though Taz can defeat any trap, he isn't prepared for the treachery that lands him in the baron's dreaded dungeon. In that seemingly inescapable place, he meets Moonbear, a prince among barbarians, a swordsman beyond compare, and Taz's only hope for salvation. But when the two seek a pathway to freedom, they find the whole kingdom on their trail in a pursuit led by a Dragonrank sorcerer on his own mission of magical revenge.

Dragonrank Master: The balance between Chaos and Law has been all but lost. Fenris Wolf and Hel herself both seek vengeance on Al Larson and his allies, the Shadow Climber and the master swordsman Gaelinar. Pursued by these nightmare foes, can Larson and the rest survive long enough to recover the one hope of the forces of Law-the legendary rod of Geirmagnus, the first Dragonrank mage-a mission that will take them from the citadel of Dragonrank powers to war-torn Vietnam to Hel's dark realm and beyond?

Mickey Zucker Reichert is a pediatrician, parent, animal lover, and author of more than 20 novels, including those in the Renshai Chronicles, Legend of Nightfall, and Beasts of Barakhai series. She has also written one illustrated novella and more than 50 short stories. Reichert lives in Iowa with her husband and two of their children and divides her time between taking care of her family, writing, practicing medicine, teaching at the local university, and tending the assorted livestock that roam her 40-acre farm.