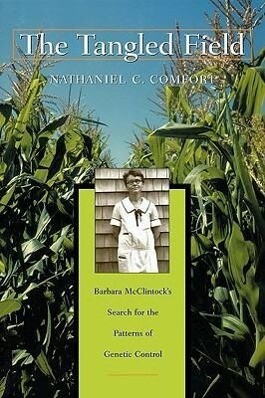 The Tangled Field: Barbara McClintock's Search for the Patterns of Genetic Control

von Nathaniel C. Comfort
Sprache: Englisch.
Taschenbuch
This biographical study illuminates one of the most important yet misunderstood figures in the history of science. Barbara McClintock (1902P1992), a geneticist who integrated classical genetics with microscopic observations of the behavior of chromos … weiterlesen
Geschenk per Mail versenden
Taschenbuch

This biographical study illuminates one of the most important yet misunderstood figures in the history of science. Barbara McClintock (1902P1992), a geneticist who integrated classical genetics with microscopic observations of the behavior of chromosomes, was regarded as a genius and as an unorthodox, nearly incomprehensible thinker. In 1946, she discovered mobile genetic elements, which she called "controlling elements." Thirty-seven years later, she won a Nobel Prize for this work, becoming the third woman to receive an unshared Nobel in science. Since then, McClintock has become an emblem of feminine scientific thinking and the tragedy of narrow-mindedness and bias in science. < P>

Lucid, engaging, and unafraid of controversy, Comfort also dismantles the popular image of McClintock as a mystic and a female pioneer marginalized by male scientists. He portrays instead a highly respected and dedicated professional adamant about maintaining her personal and intellectual freedom, who possessed an astonishing attunement to complexity and pattern and a protean ability to rapidly solve intricate, multidimensional problems. -- Donna Seaman Booklist 20010601 This readable biography of one of the twentieth century's most important geneticists interweaves fact and insight about McClintock as both person and scientist. Her discovery of mobile genetic elements in corn and her efforts to resolve fundamental problems in biology (development, heredity, and evolution) make her...a rare visionary. Natural History 20011101 In this ambitious biographical study of Barbara McClintock...[Comfort] challenges the standard interpretation of her science and her life...Comfort has reconstructed in great detail, experiment by experiment, McClintock's work on transposons...He spent years deciphering her cramped and faded handwriting in lab notebooks, on seed packets and in letters to her closest friends...The Tangled Field will certainly stand as the definitive work on Barbara McClintock's discovery of transposition and her ambition to explain development through controlling elements...Comfort does admirably what he set out to do--answer the many fascinating and troubling questions about McClintock's Nobel Prize-winning research, including why it took almost 40 years not to rediscover Barbara McClintock's work but to reinterpret it. -- Carla C. Keirns American Scientist 20020101 Comfort sets out in this intellectual biography of Barbara McClintock to replace the myth of the isolated, misunderstood victim of masculine bias who failed to win immediate recognition for her work with a more nuanced and individuated story that focuses on her actual work, particularly that of her later years. This carefully researched book pays particular attention to McClintock's research notes and previously unpublished correspondence, and it demonstrates a thorough knowledge and understanding of the science involved...[T]his is the first full-length, carefully documented, and scientifically informative study of [McClintock's] life and work, and it is an important contribution to the history of science, particularly of genetics, as well as to feminist science and the history of ideas. -- M. H. Chaplin Choice 20011201 Nathaniel Comfort's book enhances McClintock's status as one of the leading geneticists of the twentieth century. Putting aside the myth of the outsider, he describes how her contributions were appreciated by her contemporaries, and shows that she was well supported by colleagues in her search for a congenial work environment...The Tangled Field is set to become the definitive biography of Barbara McClintock. -- Anne Magurran Times Literary Supplement 20011101