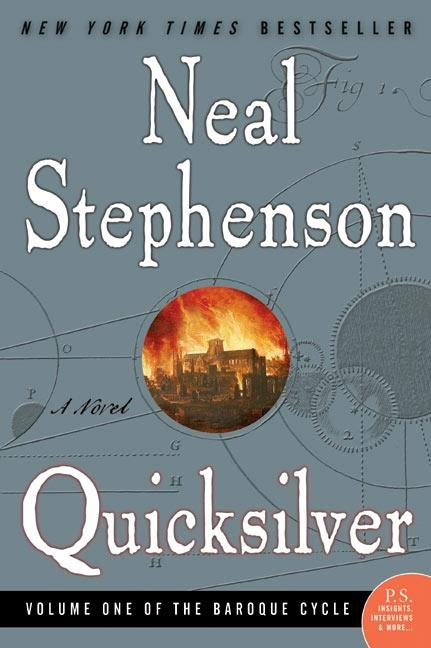 Quicksilver: Volume One of the Baroque Cycle

Quicksilver is the story of Daniel Waterhouse, fearless thinker and conflicted Puritan, pursuing knowledge in the company of the greatest minds of Baroque-era Europe, in a chaotic world where reason wars with the bloody ambitions of the mighty, and where catastrophe, natural or otherwise, can alter the political landscape overnight.

It is a chronicle of the breathtaking exploits of "Half-Cocked Jack" Shaftoe -- London street urchin turned swashbuckling adventurer and legendary King of the Vagabonds -- risking life and limb for fortune and love while slowly maddening from the pox.

And it is the tale of Eliza, rescued by Jack from a Turkish harem to become spy, confidante, and pawn of royals in order to reinvent Europe through the newborn power of finance.

A gloriously rich, entertaining, and endlessly inventive novel that brings a remarkable age and its momentous events to vivid life, Quicksilver is an extraordinary achievement from one of the most original and important literary talents of our time.

And it's just the beginning ...

Neal Stephenson is the bestselling author of the novels Reamde, Anathem, The System of the World, The Confusion, Quicksilver, Cryptonomicon, The Diamond Age, Snow Crash, and Zodiac, and the groundbreaking nonfiction work In the Beginning . . . Was the Command Line. He lives in Seattle, Washington.