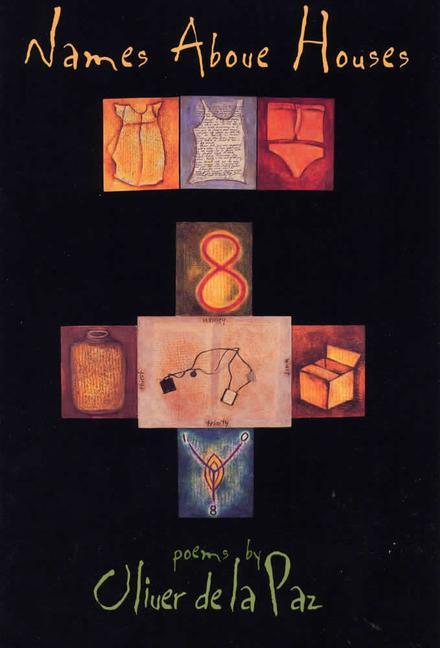 In "Names above Houses," Oliver de la Paz""uses both prose and verse poems to create the magical realm of Fidelito Recto--a boy who wants to fly--and his family of Filipino immigrants. Fidelito's mother, Maria Elena, tries to keep her son grounded while struggling with her own moorings. Meanwhile, Domingo, Fidelito's fisherman father, is always at sea, even when among them. From the archipelago of the Philippines to San Francisco, horizontal and vertical movements shape moments of displacement and belonging for this marginalized family. Fidelito approaches life with a sense of wonder, finding magic in the mundane and becoming increasingly uncertain whether he is in the sky or whether his feet are planted firmly on the ground.

Oliver de la Paz was born in Manila and raised in Ontario, Oregon. He has served as the Emerging Writer Lecturer at Gettysburg College and currently teaches at Arizona State University, where he received his M.F.A. in creative writing. His poems have appeared in the Literary Review, Quarterly West, Third Coast, and Asian Pacific American Review and in the anthology Tilting the Continent: Southeast Asian American Literature.

"Oliver de la Paz has created a unique work: a novella in the form of a sequence of prose poems; a lucidly inventive allegory of migration, exile, and belonging. With grace and elegance, he evokes the magical, myth-making culture of his Philippines and brings it to a very real California in the person of Fidelito, a boy who wants to fly, and his parents, Domingo and Maria Elena. Oliver de la Paz has the strength and wisdom to step lightly with the heavlest burdens. He is stunningly good. Names above Houses celebrates the trials and Indestructibility of a family and is a durable refreshment, an essential document of life at the cultural crossroads." - Rodney Jones, author of Elegy for the Southern Drawl "Names above Houses points to a new direction in Asian American poetry in which the creative genius of Oliver de la Paz hangs in the sky as luminous neon verse. He takes the urbane colors of John Berryman and mixes them with the sensuous hues of Arthur Sze. This is a book enriched with unexpected shifts of language, vertical and horizontal perspectives, and a full spectrum of emotion and insight." - Nick Carbo, author of Secret Asian Man"