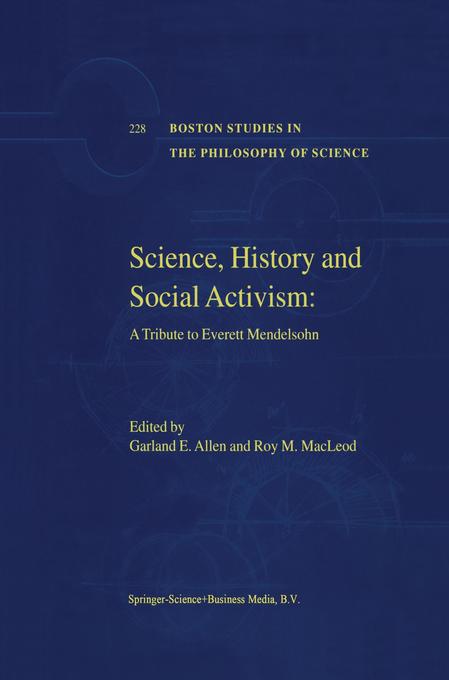 A Tribute to Everett Mendelsohn. Auflage 2001. Paperback. Sprache: Englisch.
Taschenbuch
"To earn a degree, every doctoral candidate should go out to Harvard Square, find an audience, and explain his [or her] dissertation". Everett Mendelsohn's worldly advice to successive generations of students, whether apocryphal or real, has for over … weiterlesen
Geschenk per Mail versenden
Taschenbuch

"To earn a degree, every doctoral candidate should go out to Harvard Square, find an audience, and explain his [or her] dissertation". Everett Mendelsohn's worldly advice to successive generations of students, whether apocryphal or real, has for over forty years spoken both to the essence of his scholarship, and to the role of the scholar. Possibly no one has done more to establish the history of the life sciences as a recognized university discipline in the United States, and to inspire a critical concern for the ways in which science and technology operate as central features of Western society. This book is both an act of homage and of commemoration to Professor Mendelsohn on his 70th birthday. As befits its subject, the work it presents is original, comparative, wide-ranging, and new. Since 1960, Everett Mendelsohn has been identified with Harvard Univer­ sity, and with its Department of the History of Science. Those that know him as a teacher, will also know him as a scholar. In 1968, he began- and after 30 years, has just bequeathed to others - the editorship of the Journal of the History of Biology, among the earliest and one of the most important publications in its field. At the same time, he has been a pioneer in the social history and sociology of science. He has formed particularly close working relationships with colleagues in Sweden and Germany - as witnessed by his editorial presence in the Sociology of Science Yearbook.

Preface. Introduction: The Life and Work of Everett Mendelsohn; G.E. Allen, R.M. MacLeod. I: Historical Studies in the Life Sciences and Society. Advocating the History of Science; J. Maienschein. Radical Nature in the Encyclopédie; S. Roe. August Weismann and Ferdinand Dickel: Testing the Dzierzon System; F.B. Churchill. Mendel's Hypothesis; R. Falk. Biopower: Reflections on the Rise of Molecular Biology; L.E. Kay. II: Perspectives on the Social Studies of Science. China, `Qi', and the Challenges of Engaged Scholarship; A. Harrington. How to Tell A Story in the Sciences: Settings and Lessons; H. Nowotny. A Healthy Regard for the Facts; P. Buck. The Dark Side of Progress; J.-J. Salomon. The Loss of Distance: Science in Transition; P. Weingart. Radical Politics and Marxism in the History of Science; G.E. Allen. `The Social Context of Science': Social Sciences 119 as a Way of Life and Learning; G. Werskey. III: Science, Society and the Social Responsibility of Scientists. Naturalists as Conservationists: American Scientists Social Responsibility, and Political Activism before the Bomb; M.V. Barrow. Human Experimental Abuse in and out of Context; R.N. Proctor. Networks in Action: The Kruschev Era, the Cold War and the Transformation of Soviet Science; M.B. Adams. The Multidimensional Chess of Science and Society: A Postwar Debate over Plutonium Exposure; G. Whittemore. Radioactive Fallout and Emerging Environmentalism: Cold War Fears and Public Health Concerns, 1954-1963; E.S. Watkins. `Strictly for the Birds': Science, the Military and the Smithsonian's Pacific Ocean Biological Survey Program, 1963-1970; R. MacLeod. The Human Genome Project: Past, Present and Future Anterior; M. Fortun. IV: Postscript: Everett Mendelsohn and the Middle East. Speaking Justice to Power: Everett Mendelsohn as an International Public Intellectual; Y. Ezrahi. Bibliography: The Published Works of Everett Mendelsohn. Index.

From the reviews:
"Mendelsohn's work has been multifaceted. ... He has made fascinating and path-breaking contributions in the fields of history of biology, genetics and the atomic scientists movement, to name a few. ... The series of essays contained here mirrors this extraordinary achievement. Wide-ranging, analytically stimulating and reflective, they demonstrate Mendelsohn's effect and legacy. ... This volume, and Mendelsohn's example more broadly, offer a future for the historian of science as a humanistic, socially responsible actor on the historical stage." (C. A. J. Chilvers, British Journal of History Science, 2005)

Taschenbuch
Sciences in the Universities of Europe,…

Taschenbuch
The History of Physics in Cuba