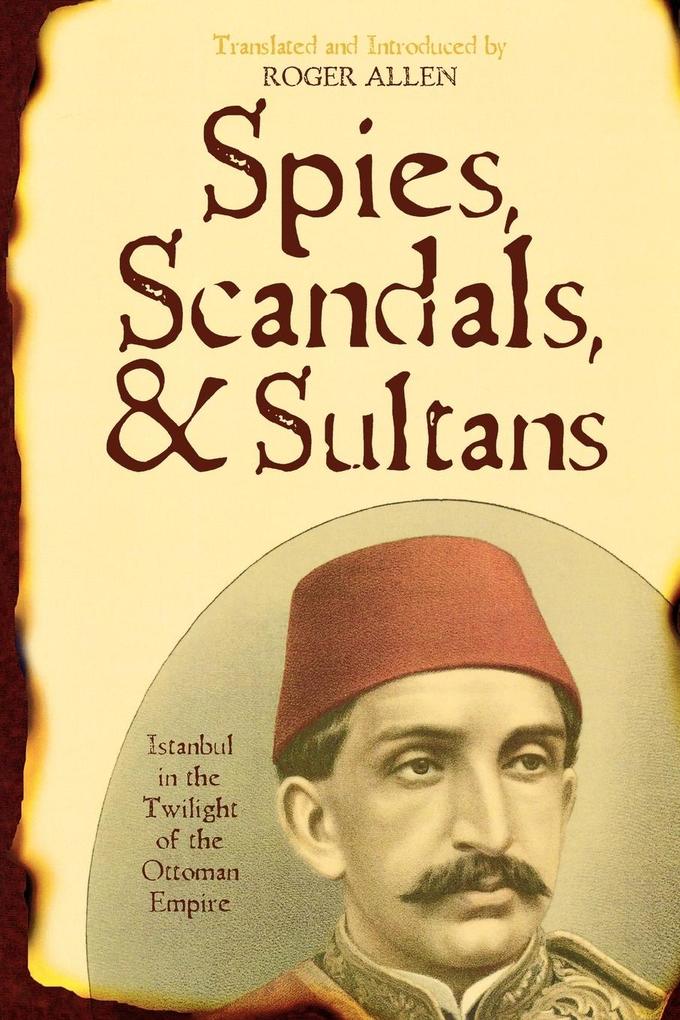 Istanbul in the Twilight of the Ottoman Empire. Paperback. Sprache: Englisch.
Taschenbuch
Spies, Scandals, and Sultans is the first English translation of a fascinating and acidly critical portrait of the Ottoman capital of Istanbul during the days of the Sultan Abd al-Hamid. This is the first time that the text, written by an Egyptian jo … weiterlesen
Dieser Artikel ist auch verfügbar als:
Geschenk per Mail versenden
Taschenbuch


Istanbul in the Twilight of the Ottoman Empire.
Paperback.
Sprache: Englisch.

Spies, Scandals, and Sultans is the first English translation of a fascinating and acidly critical portrait of the Ottoman capital of Istanbul during the days of the Sultan Abd al-Hamid. This is the first time that the text, written by an Egyptian journalist and politician, has been available since 1896. Originally published as a series of newspaper articles in the mid-1890s, and then as a book entitled Ma Hunalik, the text was ordered to be banned and burned by the Sultan's representatives in Cairo. The ban was carried out, but a few copies survived, one of which has been used for this translation. The text of the Arabic original is prefaced with an extensive introduction in which the author's life is discussed and the highly controversial contents of the book are contextualized and evaluated for their accuracy against other contemporary accounts of life in the Ottoman capital. Spies, Scandals, and Sultans presents a highly critical view of the Ottoman government in Istanbul during the 1890s, with reference to earlier eras in Ottoman history. It is an Egyptian perspective of the Ottoman administration in one of its most problematic periods and is highly critical of every aspect of life in the capital city-not least, the elaborate spy system. Spies, Scandals, and Sultans takes on the theme of modernization and the role of more traditional values, including Islamic ones, in the process of setting the goals for a modern Middle Eastern state-a process that was to come to fruition after World War One in the creation of the modern state of Turkey. This first English translation should arouse intense interest among historians of the Ottoman Empire and Egypt, as well as those who study modernization in the Middle East and the status of Islam within both traditional and modernizing societies in the region. Spies, Scandals, and Sultans has a great deal to say about the processes of decline and the causes for it, and the ever increasing role of European nations in the establishment o

Roger Allen is professor of Arabic and comparative literature at the University of Pennsylvania. He is an editor of several journals, including the Journal of Arabic Literature, Literature East & West, and Middle Eastern Literatures and was the Arabic editor for the series of encyclopedia volumes, World Literature in the 20th Century. He lives in Philadelphia.

This is an extremely important-and exceedingly well-done-translation. The text itself is surprisingly entertaining and even funny in places, as the original author often employs fascinating hearsay anecdotes to help make a point. Allen's introduction masterfully puts the text into context for the non-specialist and successfully explains why, despite the author's biases, the text should be read as more than mere polemic or diatribe. By contextualizing the key players' affiliations and interests in the useful introduction, Allen helps the reader read between the lines of the text. -- Christopher Stone, Hunter College, City University of New York Spies, Scandals, and Sultans provides a window on to the pomp and opulence of the Ottoman court in its twilight. The introduction is excellent. It outlines the life of the author and situates the serendipitously discovered book that the Ottomans banned, in its time. -- Miriam Cooke, Duke University In the dark days at the end of the glorious Ottoman Empire, a well-traveled Egyptian observer wrote such a devastating account of the failures of the Ottoman court that his book was condemned to destruction. Fortunately for those interested in the late Ottoman period, at least one copy survived to be rendered into felicitous English by Roger Allen. The text brings the Ottoman court to life before our eyes, through detailed scenes of ceremonies, court sessions, schooling, the interpretation of dreams, and diplomatic audiences. The eunuchs, shaykhs, viziers, slave-girls, judges, military officers, ambassadors, and all ranks of courtiers are described through stories of their political actions and intrigues, with special attention paid to the power struggles intrinsic to an empire under constant threat. Roger Allen has brought forward a treasure of historical and literary import. -- Sylvia Wing Onder, Georgetown University Roger Allen's translation of Ibrahim Al-Muwaylihi's Ma Hunalik is an important contribution to the field, not least because it is written by a contemporary Egyptian observer whose account corroborates those of both the European observers of the Porte and Turkish critics of the Hamidian regime. Spies, Scandals, and Sultans presents a vivid, amusing if unflattering, and highly critical picture of the Ottoman state apparatus. There is little doubt about where the author stood in relation to the sultan and his entourage but, through the elite network to which he belonged, he made acquaintances at high places and got a good glimpse of how the offices ran at the Palace and the Porte. His laconic, almost taciturn style comes out well in Roger Allen's clear and direct translation, which provides an entertaining read. -- Ahmet O. Evin, Sabanci University, Turkey Al-Muwaylihi-masterfully translated by Roger Allen-writing as an 'insider' from the Ottoman capital for his readers in Egypt, considers it a duty to criticize the state of affairs to prevent the collapse of the Muslim Empire and the Caliphate. A must-read for all who are studying the Hamidian Period of the Ottoman Empire. -- Erika H. Gilson, Princeton University Both the introduction and the text show a masterly grasp. Although documentary record and archives provide us with a lot of information about the waning Ottoman empire, Spies, Scandals, and Sultans has the advantage of an imposed vision of a discerning intellectual who was a participant in the cultural phenomenon in Egypt and Turkey, with a shrewd insight and an enormous knowledge. An excellent project. -- Muhsin al-Musawi, Columbia University