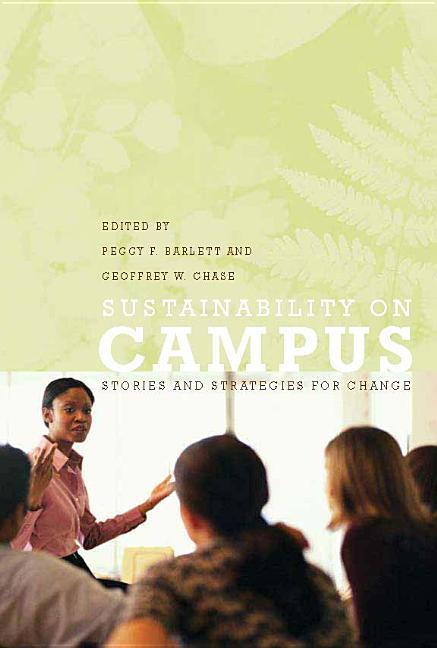 Sustainability on Campus: Stories and Strategies for Change

Titel: Sustainability on Campus: Stories and Strategies for Change

Stories both practical and inspirational about environmental leadership on campus.

Peggy F. Barlett is Professor of Anthropology at Emory University. She received a BA in anthropology from Grinnell College (1969) and the PhD in anthropology at Columbia University (1975). A cultural anthropologist specializing in agricultural systems and sustainable development, she carried out fieldwork in economic anthropology in Ecuador, Costa Rica, and rural Georgia (USA). Earlier work focused on farmer decision making, rural social change, and industrial agriculture. She has published Agricultural Choice and Change: Decision Making in a Costa Rican Community (1982, Rutgers University Press), American Dreams, Rural Realities: Family Farms in Crisis (1993, University of North Carolina Press) and is editor of Agricultural Decision Making: Anthropological Contributions to Rural Development (1980, Academic Press).Recently, interests in the challenge of sustainability in urban Atlanta have given her an opportunity to return to early training in applied anthropology and to combine it with interests in political economy, group dynamics, and personal development. Part of a growing movement toward sustainability at Emory, she has focused on expanding awareness of environmental issues through curriculum development (the Piedmont Project), campus policies, and connections to place. She also has interests in local food systems and a local Watershed Alliance. She is the coeditor (with Geoffrey Chase) of Sustainability on Campus: Stories and Strategies for Change (MIT Press, 2004). Geoffrey W. Chase is Dean of Undergraduate Studies at San Diego State University. He is the editor of four textbooks and the coeditor (with Peggy Barlett) of Sustainability on Campus: Stories and Strategies for Change (MIT Press).

"[A] must-read... take notes, and be amazed at the number of ways to achieve campus sustainability." Steve Lachman Environment