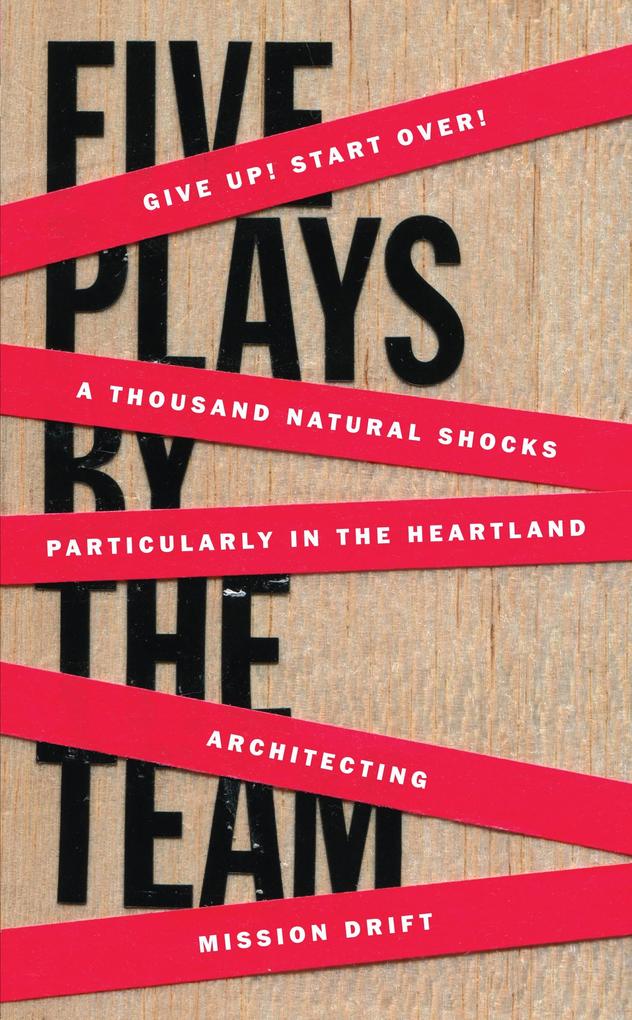 Five Plays by The TEAM

von The Team
Give Up! Start Over!, A Thousand Natural Shocks, Particularly in the Heartland, Architecting, Mission Drift.…
Taschenbuch
An anthology of five plays, celebrating the tenth anniversary of the internationally acclaimed ensemble The TEAM.

Titel: Five Plays by The TEAM
Autor/en: The Team

Give Up! Start Over!, A Thousand Natural Shocks, Particularly in the Heartland, Architecting, Mission Drift.
Sprache: Englisch.

An anthology of five plays, celebrating the tenth anniversary of the internationally acclaimed ensemble The TEAM.

The TEAM is a Brooklyn-based ensemble dedicated to creating new work about the experience of living in America today. Once described as "Gertrude Stein meets MTV," the TEAM's work crashes American history and mythology into modern stories to illuminate the current moment. They combine aggressive athleticism with emotional performances and intellectual rigor, keeping the brain, eyes and heart of the audience constantly stimulated. The company was founded in 2004 by a group of 6 NYU alumni, and has since grown to 13 core members and a continually expanding group of associate artists. They devise plays by examining a wealth of material, ranging from existing texts (fiction, theory, drama, etc.) to images taken from visual art and film, and then combining that research with original writing and staging. To date, they have created and toured 9 works nationally and internationally. The TEAM has performed all over New York (including the Public Theater, PS122, and the Ohio Theatre); nationally (including the Walker Art Center in Minneapolis, and the A.R.T. in Cambridge); and internationally (including London's National Theatre, Barbican Centre, Almeida Theatre, and Battersea Arts Centre; Edinburgh's Traverse Theatre; Lisbon's Culturgest; the Salzburg Festival; the Perth International Arts Festival; and the Hong Kong Arts Festival). Four-time winners of the Scotsman Fringe First Award, Winner 2011 Edinburgh International Festival Fringe Prize, 2011 Herald Angel, 2008 Edinburgh Total Theatre Award, Best Production Dublin Fringe 2007, and were nominated for the Drama League Award for Outstanding Musical. We were recently cited on 'Best of 2013' lists on 3 continents.