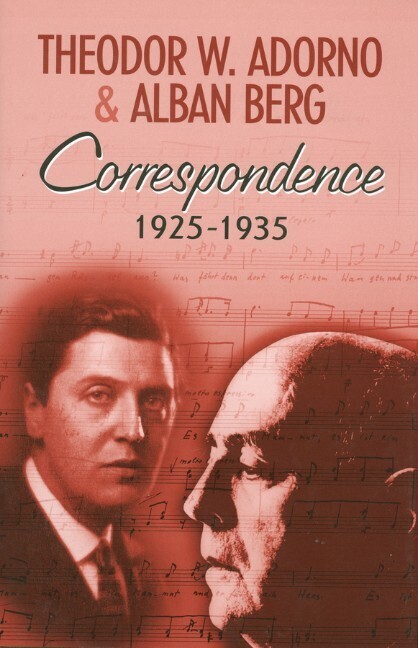 von Theodor W. Adorno, Alban Berg
Sprache: Englisch.
Taschenbuch
In December 1945 Thomas Mann wrote a famous letter to Adorno in which he formulated the principle of montage adopted in his novel Doctor Faustus. The writer expressly invited the philosopher to 'consider, with me, how such a work - and I mean Leverku … weiterlesen
Dieser Artikel ist auch verfügbar als:
Geschenk per Mail versenden
Taschenbuch

In December 1945 Thomas Mann wrote a famous letter to Adorno in which he formulated the principle of montage adopted in his novel Doctor Faustus. The writer expressly invited the philosopher to 'consider, with me, how such a work - and I mean Leverkuhn's work - could more or less be practically realized'.

"These letters provide us with a unique overview of the period and offer interesting and enlightening perspectives on even mundane aspects of daily life, as well as bringing us closer to the characters in question by allowing us a special insight into thir peculiar foibles and eccentricities." Musical Times "Major composers who befriend major philosophers, and vice-versa, are hardly numerous in the history of Western culture. Alban Berg's relationship with Theodor W. Adorno as teacher and colleague ranks with that between Richard Wagner and Friedrich Nietzsche, with the difference that Berg's and Adorno's genuine affection for each other, and their magnificent insight into each other's work, remained constant to the end. Their correspondence is one of the landmarks of the early twentieth century and its music -- a beacon of light in desperate times." John Deathridge, King's College London "Sensitively translated and skillfully edited, the Adorno-Berg Correspondence represents scholarship eminently worthy of this extraordinary collection of letters between two twentieth-century intellectual-artistic giants. Adorno's composition lessons with Berg lasted for only a few months, but the impact transformed his understanding of modern music in particular and aesthetics in general. Berg, in turn, respected his pupil's abilities as a composer, just as he clearly benefited, both intellectually and emotionally, from young Adorno's profound insight into his master's music. Though separated in age by nearly two decades, the two men formed a relationship born of deep affection and still deeper shared respect that lasted until Berg's untimely and sudden death. The collected correspondence makes available for the first time in English a body of texts that will add significantly to our understanding of Adorno and Berg as well as their breathtaking accomplishments." Richard Leppert, University of Minnesota