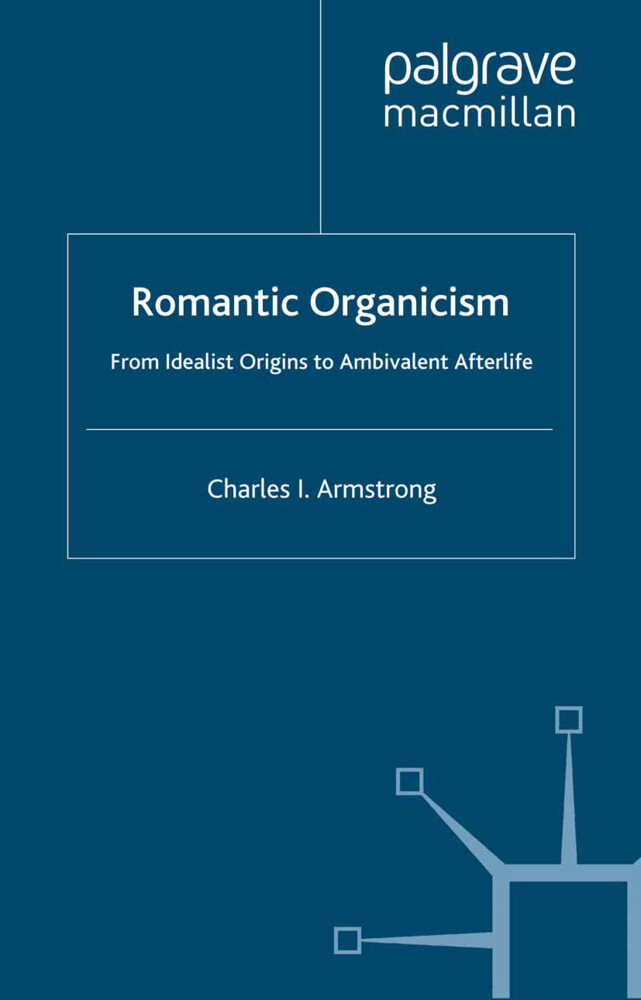 von C. Armstrong
From Idealist Origins to Ambivalent Afterlife. 1st ed. 2003. Paperback. Sprache: Englisch.
Buch (gebunden)
Romantic Organicism attempts to reassess the much maligned and misunderstood notion of organic unity. Following organicism from its crucial radicalisation in German Idealism, it shows how both Coleridge and Wordsworth developed some of their most pro … weiterlesen
Geschenk per Mail versenden
Buch (gebunden)

Romantic Organicism attempts to reassess the much maligned and misunderstood notion of organic unity. Following organicism from its crucial radicalisation in German Idealism, it shows how both Coleridge and Wordsworth developed some of their most profound ideas and poetry on its basis. Armstrong shows how the tenets and ideals of organicism - despite much criticism - remain an insistent, if ambivalent, backdrop for much of our current thought, including the work of Derrida amongst others.

Contents Acknowledgements First Articulations PART ONE: GERMAN IDEALISM AND FRÜHROMANTIK Absolute Organicism in German Idealism: Kant, Fichte, and Schelling Prefaces to the New Gospel: Friedrich Schlegel and the Fragment PART TWO: ENGLISH ROMANTICISM Organic Vagaries: Coleridge's Theoretical Work Early Affinities: Friendship and Coleridge's Conversation Poems On the Threshold: Wordsworth's Architectonic of the Absolute PART THREE: MODERN THEORY Balance and Extremity: A Comparison of Richards and Bataille The Connections of Significance: Gadamer and the Vitality of Understanding On the Double: Blanchot, Derrida, and the Step Beyond Ending the Automatic Notes Bibliography Index

CHARLES I. ARMSTRONG is Associate Professor at the English Department of the University of Bergen, Norway, and has been a visiting scholar at Wolfson College, Cambridge

'This is extremely impressive work that shows enormous intellectual range, vast reading and great learning.' - Simon Critchley, Professor of Philosophy at the University of Essex and Programme Director of the Collège Internationale de Philosophie, Paris

between German and British Romanticism, the afterlife of Romantic theory, and

the debates about its continuing presence in the latest negotiations between

live philosophical traditions. It possesses a kind of learning which has been

underrated in British Romantic studies for a long time, and, strikingly, it

engages convincingly with the English literary examples which, if the

Continental tradition got it right, ought to consolidate that philosophical