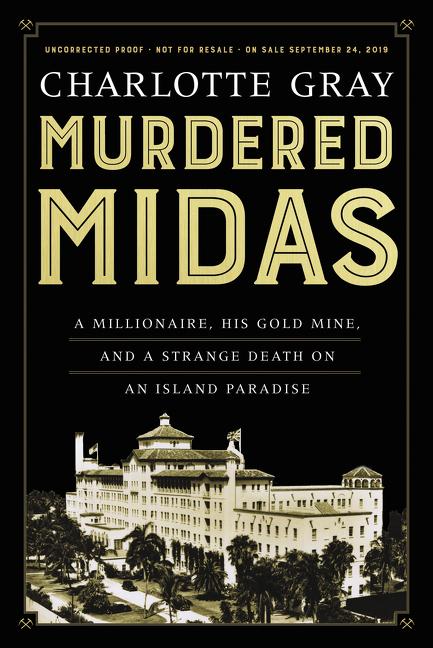 Murdered Midas: A Millionaire, His Gold Mine, and a Strange Death on an Island Paradise

von Charlotte Gray
Sprache: Englisch.
Buch (gebunden)
A gold mine. A millionaire. An island paradise. An unsolved murder. A missing fortune. The story of the infamous Sir Harry Oakes as only Charlotte Gray can tell it

Titel: Murdered Midas: A Millionaire, His Gold Mine, and a Strange Death on an Island Paradise
Autor/en: Charlotte Gray

A gold mine. A millionaire. An island paradise. An unsolved murder. A missing fortune. The story of the infamous Sir Harry Oakes as only Charlotte Gray can tell it

On an island paradise in 1943, Sir Harry Oakes, gold mining tycoon, philanthropist and "richest man in the Empire," was murdered. The news of his death surged across the English-speaking world, from London, the Imperial centre, to the remote Canadian mining town of Kirkland Lake, in the Northern Ontario bush. The murder became celebrated as "the crime of the century."

The layers of mystery deepened as the involvement of Oakes' son-in-law, Count Alfred de Marigny, came quickly to be questioned, as did the odd machinations of the Governor of the Bahamas, the former King Edward VIII. Despite a sensational trial, no murderer was ever convicted. Rumours were unrelenting about Oakes' missing fortune, and fascination with the Oakes story has persisted for decades.

Award-winning biographer and popular historian Charlotte Gray explores, for the first time, the life of the man behind the scandal, a man who was both reviled and admired - from his early, hardscrabble days of mining exploration, to his explosion of wealth, to his grandiose gestures of philanthropy. And Gray brings fresh eyes to the bungled investigation and shocking trial in the remote colonial island streets, proposing an overlooked suspect in this long cold case. Murdered Midas is the story of the man behind the newspaper headlines, who, despite his wealth and position, was never able to have justice.

CHARLOTTE GRAY is one of Canada's best-known writers and the author of ten acclaimed books of literary non-fiction. Her most recent bestseller is The Promise of Canada—150 Years: People and Ideas That Have Shaped Our Country. Her bestseller The Massey Murder: A Maid, Her Master, and the Trial That Shocked a Country won the Toronto Book Award, the Heritage Toronto Book Award, the Canadian Authors Association Lela Common Award for Canadian History and the Arthur Ellis Award for Best Nonfiction Crime Book. It was shortlisted for the RBC Taylor Prize, the Ottawa Book Award for Non-Fiction and the Evergreen Award, and longlisted for the BC National Award for Canadian Non-Fiction. An adaptation of her bestseller Gold Diggers: Striking It Rich in the Klondike was broadcast as a television miniseries. An adjunct research professor in the department of history at Carleton University, Charlotte Gray is the recipient of the Pierre Berton Award for distinguished achievement in popularizing Canadian history. She is a Member of the Order of Canada and a Fellow of the Royal Society of Canada.

Schreiben Sie eine Bewertung für: Murdered Midas: A Millionaire, His Gold Mine, and a Strange Death on an Island Paradise