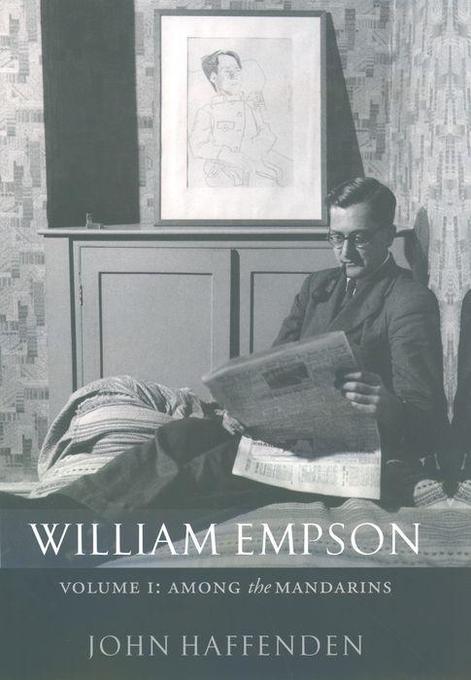 William Empson: Among the Mandarins

von John Haffenden
Sprache: Englisch.
Buch (gebunden)
William Empson (1906-1984) was the foremost English literary critic of the twentieth century. He was a man of huge energy and curiosity, and a genuine eccentric who remained imperturbable in the face of all the extraordinary circumstances in which he … weiterlesen
Dieser Artikel ist auch verfügbar als:
Geschenk per Mail versenden
Buch (gebunden)

William Empson (1906-1984) was the foremost English literary critic of the twentieth century. He was a man of huge energy and curiosity, and a genuine eccentric who remained imperturbable in the face of all the extraordinary circumstances in which he found himself. The discovery of
contraceptives in his possession by a bedmaker at Cambridge University led to his being robbed of a promised Fellowship. Yet Seven Types of Ambiguity (1930), drafted while he was still an undergraduate, promptly brought him world-wide fame.
Empson invented modern literary criticism in English. He acted too as a cultural fifth-columnist, challenging received doctrine in life and literature. "It is a very good thing for a poet...to be saying something which is considered very shocking at the time," he maintained. "To become morally
independent of one's formative society...is the grandest theme of all literature, because it is the only means of moral progress."
His public life took him through many of the major political events of the modern world--the rise of imperialism in Japan, the Sino-Japanese war in China, wartime propaganda for the BBC, and the Chinese civil war and Communist takeover of Peking in 1949. His friends and critical sparring partners
included I. A. Richards, Kathleen Raine, J. B. S. Haldane, Humphrey Jennings, George Orwell, Robert Lowell, Dylan Thomas, Stephen Spender, Helen Gardner, and T. S. Eliot.
"It is of great importance now that writers should try to keep a certain world-mindedness," he insisted. "Without the literatures you cannot have a sense of history, and history is like the balancing-pole of the tightrope-walker...; and nowadays we very much need the longerbalancing-pole of not
national but world history." His passionate world-mindedness, and his humanism, combativeness, and wit, are fully in evidence in this, the first of two volumes exploring his remarkable life and work.

Table of Dates; 1. Introduction; 2. In the Blood: Sir Richard Empson, Professor William, and John Henry; 3. 'A horrid little boy, airing my views'; 4. 'Owl Empson'; 5. 'Did I, I wonder, talk too much?'; 6. 'Mr Empson gave a very competent performance'; 7. 'His presence spellbound us all': The Experiment Group; 8. The Making of Seven Types of Ambiguity: Influence and Integrity; 9. 'Those Particular Vices': Crisis, Expulsion, and Aftermath; 10. Seven Types of Ambiguity: The Critical Reception; 11. The Trials of Tokyo; 12. Poems 1935; 13. Scapegoat and Sacrifice: Some Versions of Pastoral; 14. 'Waiting for the end, boys': Politics, Poets, and Mass-Observation; 15. Camping Out: China 1937-38; 16. 'The savage life and the fleas and the bombs': China 1938-39; 17. Postscript; Appendix: Further Famous Forebears