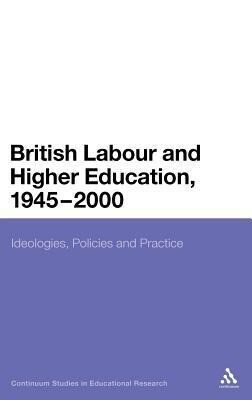 Explores the development of the Labour Partys policy on higher education from 1945 to 2000.

Part I: The Context; 1. Introduction; 2. The Ideology of Labour's Social Policy since 1945 and the Context for Higher Education Development; 3. The Dimensions of Change in Britain's Higher Education since 1945; Part II: From Post-War Reconstruction to Robbins: 1945 to 1963; 4. The Christian Socialist Moot and the 'Crisis in the Universities'; 5. The Moralist Tradition; 6. The Vocational, Utilitarian Imperative, and the Increasing Dominance of Science and Technology; 7. The Marxist Left, Workers and Higher Education; Part III: University Expansion in the 1960s and Labour's "New Society"; 8. The 'Plate Glass 1960s' Universities; 9. Labour and the Polytechnics; 10. The Open University; Part IV: Binary and Beyond; 11. Labour in Retreat: The Responses to Educational Thatcherism and the End of Binarism; 12. Whatever Happened to Adults? New Labour, Lifelong Learning and Mass Higher Education; 13. Postscript: Higher Education and Labour After Blair; References; Index.

Tom Steele is Honorary Senior Research Fellow at the University of Glasgow, UK, where he was formerly Reader in History and Theory of Adult Education. Richard Taylor was formerly Professor of Education and Director of the Institute of Continuing Education, University of Cambridge, UK.

'Richard Taylor and Tom Steele's detailed and informative study of higher education in the United Kingdom between 1945 and 2000 documents its development against a background of recurring economic crises and neo-conservative traditionalist and new labour pragmatist agendas. This book is essential reading for anyone interested in the origins of current debates about the role of the state in higher education and its ultimate purpose and function.' David Scott, Professor of Curriculum, Pedagogy and Assessment and Faculty Director of Teaching and Learning, Institute of Education, University of London, UK