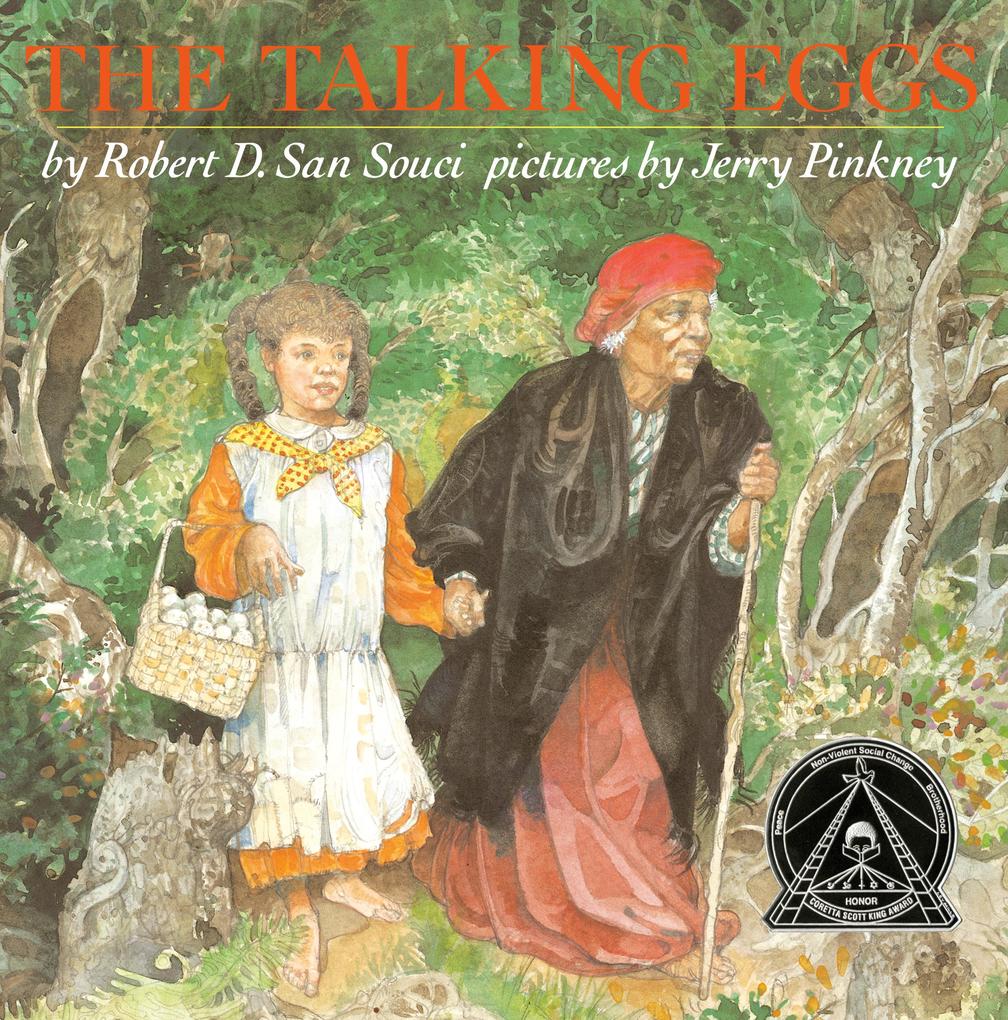 The Talking Eggs: A Folktale from the American South

von Robert D. San Souci
Empfohlen von 4 bis 8 Jahren. Sprache: Englisch.
Buch (gebunden)
The author of such delights as The Christmas Ark and The Enchanted Tapestry joins forces with illustrator Pinkney to resurrect a colorful folktale that captures the unique flavor of the American South. A 1989 Caldecott Honor Book.

The author of such delights as The Christmas Ark and The Enchanted Tapestry joins forces with illustrator Pinkney to resurrect a colorful folktale that captures the unique flavor of the American South. A 1989 Caldecott Honor Book.

A native Californian, Robert D. San Souci was born in San Francisco and raised across the bay inBerkeley. Reading and writing have always been a part of his life -- his earliest memories are ones of being read to.

"I always knew I wanted to be a writer.Before I knew how to read and write, I would listen carefully to stories that were read to me, thenI would retell them to my younger sister and brothers. But I would add a new twist or leave outparts I didn't find interesting -- so the storytelling impulse was already at work in me".

In elementary school, Mr. San Souci wrote for his school newspaper, and in high school, heenthusiastically worked on his school's yearbook. He was thrilled to have an essay of his printedin a book titled T.V. as Art. As a student at St. Mary s College, he took a variety of classes in creative writing, English and world literature. In graduate school, he focusedon the studies of folklore, myth and world religions.

As a budding writer, Mr. San Souci supported himself in the publishing field as a copywriter and abook editor. "All the time, I was writing newspaper articles, book and theater reviews, andstories for magazines", he notes.

"In 1978, my first book, The Legend of Scarface, was published and illustrated by myyounger brother, Daniel San Souci. The book was highly acclaimed. I was lucky to have anartist/illustrator in the family -- it s great working with Dan".

Many of Mr. San Souci's ideas for books come from reading and researching. He also findsinspiration by traveling and keeping his eyes open. "I love to travel by bus. I can sit and stare outthe window and simply observe". And sometimes he just listens to people talking. "I love tolisten for the flow and rhythm of the language that different people use".

When writing books for children, Mr. San Souci knows that it's important to listen to the childinside. He has always had a love of folklore which inspires many of his books. As a boy, he wasfascinated by knights, dragons, and the Arthurian legends. As an adult, he continues to mine thewealth of oral tales from around the world and brings this literature and history to life in dramaticstories for today's children.

Altogether, Mr. San Souci has published 56 books, most of them based on legends, myths andfolklore. His latest book, Kate Shelley: Bound for Legend (Dial), is the true story ofKate Shelley, who at 15, risked her life to prevent a passenger train from plunging off astorm-wrecked bridge near Boone, Iowa in 1881. She received a gold medal from the state ofIowa for her heroism.

Robert San Souci resides in San Francisco, California, and is the recipient of several major awardsincluding the 1993 Aesop Prize, a prestigious annual award for a children's book thatbest incorporates folklore in text and illustration.

Jerry Pinkney has been illustrating children's books since 1964 and has the rare distinction of being the recipient of:Five Caldecott Honor Medals
Five Coretta Scott King Awards
Four New York Times Best Illustrated Awards (most recently 2006 Little Red Hen)
Four Gold and four Silver medals from the Society of Illustrators
Boston Globe Honor Book Award (John Henry 1994)
In addition to his work on children's books, he is an extremely successful artist who has had eleven one-man retrospectives at venues ranging from the Museum of the National Center of Afro-American Artists to the Art Institute of Chicago. His current one-man show entitled, "Building Bridges, the Art of Jerry Pinkney" was organized by the Pittsburgh Children's Museum and will be traveling through 1998. Mr. Pinkney has illustrated for a wide variety of clients, including National Geographic , the National Parks Service, the U.S. Postal Service, the American Library Association and the Association of Booksellers for Children.
Born in Philadelphia in 1939, Jerry Pinkney states, "(I) took an interest in drawing very early in my life, and at some point I realized I'd rather sit and draw than do almost anything else." While growing up in the Germantown section of Philadelphia his interest in art was supported by hisfamily -- especially by his mother. "She certainly understood me and made it clear to everyone that if art was what I wanted to pursue, then that's what she wanted to have happen. My father also became very supportive, and when I wanted to take art classes after school he found ways for me to attend."
In junior high school Mr. Pinkney had a newsstand and took a drawing pad with him to work every day and sketched passersby. That was how he met the cartoonist John Liney, who encouraged him to draw and showed him the possibilities of making a living as an artist.
After graduating from the commercial art program at Dobbins Vocational School, where he met his wife, author Gloria Jean Pinkney, Jerry Pinkney received a full scholarship to attend the Philadelphia Museum College of Art (now University of the Arts). While at PCA he and Gloria married. After their first child was born, they moved to Boston, where Mr. Pinkney worked as a designer at Rustcraft Greeting Card Company, and at Barker-Black Studio where he developed his reputation as an illustrator. Eventually he opened Kaleidoscope Studio with two other artists. Later he opened his own freelance studio -- Jerry Pinkney Studio -- and moved to New York. Sensitivity to and an interest in a variety of cultures has always been a dominant theme of Mr. Pinkney s work. He has also drawn inspiration for a significant part of his work from African American culture. Among his numerous projects are his twelve postage stamps for the U.S. Postal Service Black Heritage series. Mr. Pinkney was a member of its Advisory Committee for ten years and he was also invited to join the NASA artist team for the space shuttle Columbia. "I wanted to show that an African American artist could make it on a national level in the graphic arts. I want to be a strong role model for my family and for other African Americans."
Many of Mr. Pinkney's children's books celebrate multicultural and African American themes. "Working on both the Uncle Remus tales and John Henry has shown me an important link between pivotal and opposite African American folk heroes. Brer Rabbit, the sly trickster, originated during slavery and was the first African American folk hero. Slaves who wanted to get the better of their masters needed to be cunning and sly -- hence the trickster role. However, later comes John Henry, a free man, whose strength and valor bring him fame. He was a strong folk hero for African Americans, a symbol of all the working men who made a major contribution to the building of the roads and railroads in the mountains of West Virginia -- a dangerous job for which many paid with their lives."
Mr. Pinkney's two latest books areThe Little Red Hen and The Old African by Julius Lester (illustrated by Jerry Pinkney). Books give me a great feeling of personal and artistic satisfaction. When I'm working on a book, I wish the phone would never ring. I love doing it. My satisfaction comes from the actual marks on the paper, and when it sings, it's magic".
Jerry and Gloria Pinkney live in Westchester County, New York. The Pinkneys have four children: Troy, Scott, Brian, and Myles, and seven grandchildren. Two of the Pinkney's children are also involved in children's book illustration, Brian through illustrations, and Myles throughphotography. In addition to illustrating children's books and other projects, Mr. Pinkney has also been an art professor at the University of Delaware and State University of New York at Buffalo. He has given workshops and been a guest lecturer at universities and art schools across thecountry.
copyright © 2007 by Penguin Putnam Books for Young Readers. All rights reserved.