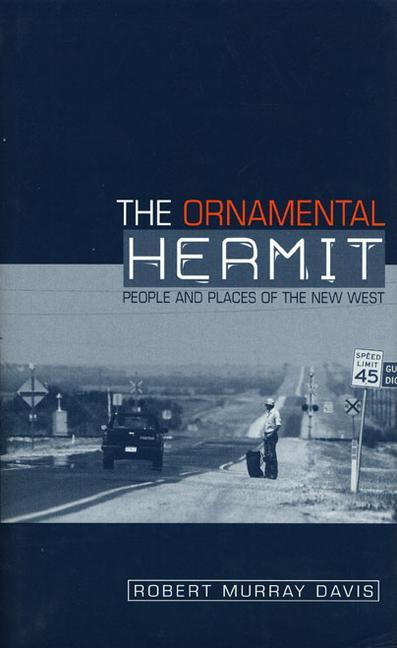 The Ornamental Hermit: People and Places of the New West

In eighteenth-century England, some wealthy people built ruins on their estates, hired hermits to inhabit them, and took guests to view the picturesque results. While no one hires ornamental hermits anymore, society as a whole supports people like Thoreau or Edward Abbey who step aside to comment on ordinary life as critics or would-be prophets yet who still get to head into town for a slice of Mrs. Emerson's pie or a shot or three at a Moab saloon--or, as in the case of Bob Davis, drive over the mountain for a Jemez Grande Burger and an internet link. Davis had the chance to look back at America from Communist Hungary, and what he saw changed his view of himself and his country. He discovered that he agreed less with Thoreau and Abbey, and even less with European critics, and more with Chuck Berry--glad, mostly, to be living in the USA as he crossed and recrossed it, heading west from his boyhood home in Missouri to California and many points between. In his essays, he celebrates the achievements of the Navajo Nation's radio station; of the young mayor of Blackwater, Missouri, who helped to revive the town; and of Moab, Utah, which survived boom and bust and even Abbey to reinvent itself. Some attempts to create or re-create he views more wryly: the Texas Panhandle's two vertical monuments; Forest Lawn and the Gene Autry Museum, trying to deny death and reality; the Grapes of Wrath Festival in Sallisaw, Oklahoma. But even events and artifacts verging on the ludicrous can be appreciated for the energy put into them. And around and between all of them is the American West, often apparently dead and empty yet still able to evoke complex emotions and to jar the traveler out ofself-absorption, self-pity, self-regard. Fans and writers of Western literature will enjoy the musings of this former president of the Western Literature Association. Anyone who enjoys language will delight in Robert Murray Davis's use of it.