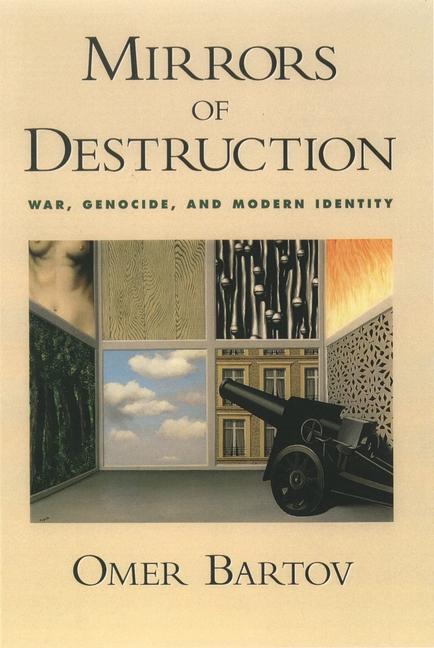 Mirrors of Destruction examines the relationship between total war, state-organized genocide, and the emergence of modern identity. Here, Omer Bartov demonstrates that in the twentieth century there have been intimate links between military conflict, mass murder of civilian populations, and
the definition and categorization of groups and individuals.
These connections were most clearly manifested in the Holocaust, as the Nazis attempted to exterminate European Jewry under cover of a brutal war and with the stated goal of creating a racially pure Aryan population and Germanic empire. The Holocaust, however, can only be understood within the
context of the century's predilection for applying massive and systematic methods of destruction to resolve conflicts over identity. To provide the context for the "Final Solution," Bartov examines the changing relationships between Jews and non-Jews in France and Germany from the outbreak of World
War I to the present.
Rather than presenting a comprehensive history, or a narrative from a single perspective, Bartov views the past century through four interrelated prisms. He begins with an analysis of the glorification of war and violence, from its modern birth in the trenches of World War I to its horrifying
culmination in the presentation of genocide by the SS as a glorious undertaking. He then examines the pacifist reaction in interwar France to show how it contributed to a climate of collaboration with dictatorship and mass murder. The book goes on to argue that much of the discourse on identity
throughout the century has had to do with identifying and eliminating society's "elusive enemies" or "enemies from within." Bartovconcludes with an investigation of modern apocalyptic visions, showing how they have both encouraged mass destructions and opened a way for the reconstruction of
individual and collective identifies after a catastrophe.
Written with verve, Mirrors of Destruction is

Omer Bartov is John P. Birkelund Distinguished Professor of European History and Professor of History at Brown University and has written on the Holocaust, Nazi Germany, and modern France. His books include Murder in Our Midst: The Holocaust, Industrial Killing, and Representation; Hitler's Army: Soldiers, Nazis, and War in the Third Reich; and The Eastern Front, 1941-45: German Troops and the Barbarisation of Warfare.

His insights about the Great War, the Holocaust, and public memory makes Mirrors of Destruction an important contribution to the literature. History What does it mean to "come to terms with the Holocaust?" ... Bartov brings a prodigious amount of reading, intelligence, and critical energy to [this question] ... To his credit, [he] rejects the mystifications that one often finds in writing on the Holocaust--for instance, the notion that it is fundamentally inexplicable, or that only survivors can grasp its deeper significance ... In his conclusion [he] explores new material, taking on new polemics and problems and offering a brilliant analysis of the strange case of Binjamin Wilkomirski, a Swiss writer who falsely claimed to be a Holocaust survivor in his memoir 'Fragments. The New York Times Book Review Bartov's work has always been characterized by its thoughtfulness and independence, and here he combines archival research with an interdisciplinary critique of the literature drawn from widely diverse fields. He focuses on the links of social, cultural, and military history and offers particularly interesting insights into Europe's two major wars in this century and their relationship to the Holocaust. This is history painted in large strokes, and anyone trying to understand how and why the promise of the twentieth century went horribly wrong should read this book. Robert Gellately, Strassler Professor in Holocaust History, Clark University