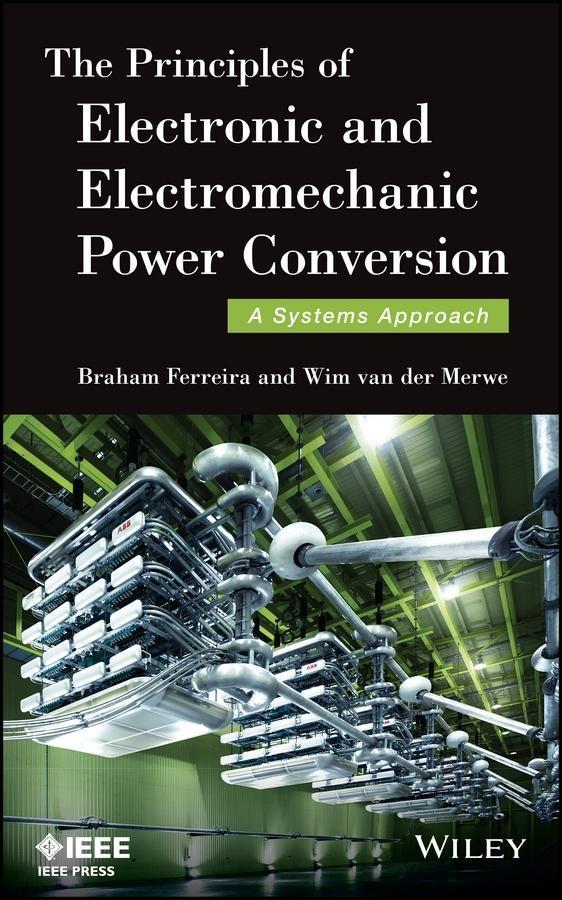 The Principles of Electronic and Electromechanic Power Conversion

A top-down approach that enables readers to master and apply core principles Using an innovative top-down approach, this text makes it possible for readers to master and apply the principles of contemporary power electronics and electromechanic power conversion, exploring both systems and individual components. First, the text introduces the role and system context of power conversion functions. Then the authors examine the building blocks of power conversion systems, describing how the components exchange power. Lastly, readers learn the principles of static and electromechanic power conversion. The Principles of Electronic and Electromechanic Power Conversion opens with a chapter that introduces core concepts in electrical systems and power conversion, followed by a chapter dedicated to electrical power sources and energy storage. Next, the book covers: Power, reactive power, and power factor Magnetically coupled networks Dynamics of rotational systems Power electronic converters DC machines AC machines The text offers readers a concise treatise on the basic concepts of magnetic circuits. Its simple approach to machines makes the principles of field-oriented control and space vector theory highly accessible. In order to help readers fully grasp power electronics, the authors focus on topologies that use a series transistor and diode combination connected to a DC source, a standard building block of today s power conversion systems. Problem sets at the end of each chapter enable readers to fully master each topic as they progress through the text. In summary, The Principles of Electronic and Electromechanic Power Conversion provides the most up-to-date, relevant tools needed by today s power engineers, making it an ideal undergraduate textbook as well as a self-study guide for practicing engineers.

1.1 Electricity as an Energy Carrier

All through human existence, some of the greatest advancements in the standard of living came about by learning how to convert energy from one form to another. The first controlled and intentional fire (converting chemical energy to heat energy) was the first step in this process. Man employed the energy from biomass for heating and cooking by burning dried leaves, wood and animal waste. The chemical energy trapped in the organic material was released and converted into heat and light energy.

Later, humans discovered that wind could be used for transportation on water. By using sails, the energy present in moving air can be used to propel a ship in water. Wind energy is a form of kinetic energy that is used to overcome the resistance of water and make the ship move.

The generation of mechanical energy to replace human or animal power came later in human history with the development of simple devices to harness the energy of flowing water and wind. The earliest machines built were waterwheels used initially for grinding grain but later adopted for various other functions such as for driving saw mills and pumps. The oldest reference to a water mill dates to about 85 BC, appearing in a poem by an early Greek writer. The source of energy harnessed here is the potential energy of water, which flows from high areas along rivers to the sea.

Windmills, like waterwheels, were among the original machines that replaced animal muscle as a source of power. They were used for centuries in various parts of the world, converting the energy of the wind into mechanical energy for grinding grain, pumping water and draining lowland areas.

The rapid growth of industry from the mid-18th century created a need for new sources of motive power, particularly solutions that are independent of geographic location and
weather conditions. This situation, together with certain other factors, set the stage for the development and widespread use of the steam engine, the first practical device for converting thermal energy into mechanical energy. In 1765, James Watt, a Scottish instrument maker and inventor, made important modifications to the steam engine which resulted in a fuel cost reduction of about 75%. This was the first modern breakthrough in improving the efficiency of a machine that converts energy. The unit for electrical power, the rate of energy flow or energy conversion, was named after JamesWatt.

An advantage of electrical energy is that it can be easily controlled, by using, for example, switches. An oil lamp can be ignited with a match, while it is much simpler to push the button of a switch to turn on a light. Today, you do not even have to get out of the chair to turn on the light or television; you can use a remote control that is carried in your po
cket.

An alternative source of electrical energy is batteries in which chemical energy is directly converted to electrical current. Electrical automobiles using batteries succeeded steam-powered self-propelled vehicles but were later displaced by combustion engine-powered automobiles because the energy density of gasoline is much higher than that of a battery.

Figure 1.1 illustrates the interaction between different forms of energy. All energy comes from nuclear reaction, taking place either in the sun or on the earth. Energy from water, wind and solar radiation is called renewable because it cannot be depleted. Fossil fuels, on the other hand, while a cheap and easily available source of energy, can only be consumed once and, as a result, these sources of energy are being depleted.

Figure 1.1 The interaction between different forms of energy.

One of the major problems wit
h electrical energy is the willing buyer/willing seller principle. It is impossible to generate electrical energy if there is no consumer of that form of energy. Electrical energy can only be used as a carrier to transport energy from one place (of generation) to another (of consumption). Although it is possible, as we will discuss later in this book, to store limited amounts of electrical energy, we can only generate electrical energy if we have a consumer, even if the storage device is the consumer for that period in time. One of the big challenges to be solved in future energy systems is the fact that the electrical grid will be supplied by a growing amount of renewable energy, which fluctuates between day and night and when wind conditions vary. This will imply that energy may not be available when it is needed by the consumer or the energy could be in abundance it is not needed. Large energy storage systems can solve this problem but it is easier said than done. This puzzle will need to be solved with the Smart Grid in the future.

The process of energy conversion needs to be controlled. The early humans quickly learned how much wood was required to prepare food for an evening meal. Then they had to feed fuel to the fire at a specific rate to ensure that the flame was large enough, but not too big, to cook food or to roast meat. The same process of controlling the application of energy was used when coal was shovelled into the furnace chamber built into the boiler of a steam locomotive, see Fig. 1.2. Generating the right amount of steam for propulsion and controlling the pressure in the boiler was complicated, and driving a steam engine requires years of practice and apprenticeship training.

In a steam locomotive, a complicated system of regulators and throttle valves is employed to control the steam pressure
and the flow of energy to the pistons that are directly mounted on the driving wheels of the locomotive. The steam engine was improved by feeding the steam back through boiler tubes to superheat (to heat something to beyond its boiling point) the steam to increase the engine efficiency and power. The modification of the steam engine set the trend to apply advanced technology to improve the efficiency of energy conversion systems. As a result, modern energy conversion systems are complex and have many conversion stages.

Continuing with the example of the train locomotive, we observe in Fig. 1.3 how the distance between the furnace or chamber where the combustion takes place and mechanical energy conversion has increased. In a diesel-electrical locomotive, the combustion takes place in a diesel engine that is connected to an electrical generator. The energy required by the train is then supplied, in electrical form, to an electronic power converter that controls both the speed and traction power delivered to the wheels by controlling the flow of electrical energy delivered to the electrical motors. This power electronic converter fulfils the same function as that of the gears and throttle in an automobile. In the final stage of the conversion chain, the electrical energy is converted to mechanical energy by an electrical motor that is directly connected to the axle.