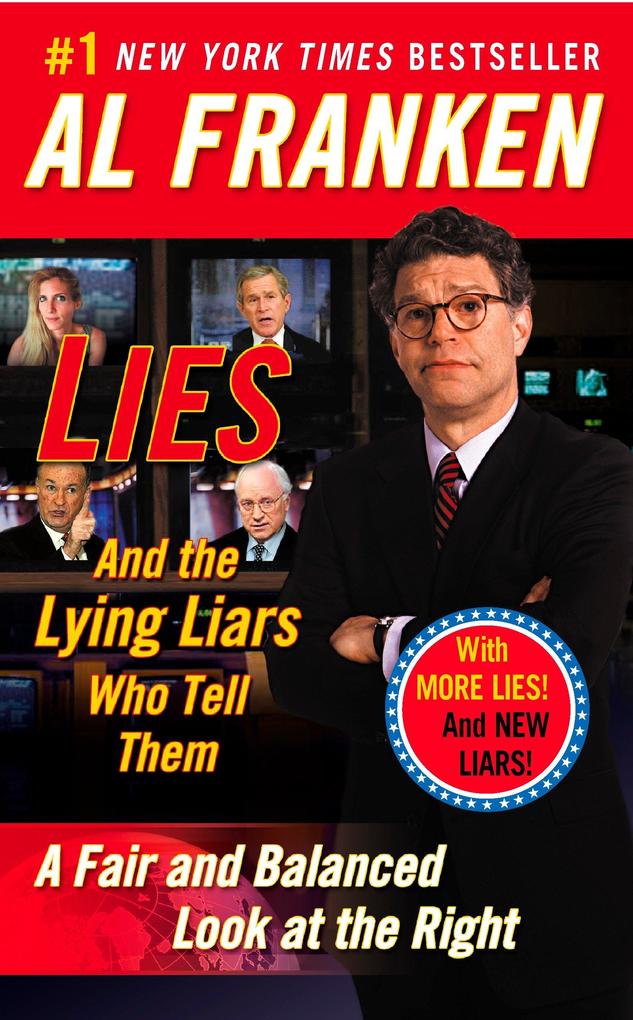 Lies: And the Lying Liars Who Tell Them: A Fair and Balanced Look at the Right

von Al Franken
Empfohlen ab 18 Jahre. Sprache: Englisch.
Taschenbuch
The #1 New York Times bestseller by Senator Al Franken, author of Giant of the Senate Al Franken, one of our "savviest satirists" (People), has been studying the rhetoric of the Right. He has listened to their cries of "slander," "bias," and even "t … weiterlesen
Geschenk per Mail versenden
Taschenbuch

Titel: Lies: And the Lying Liars Who Tell Them: A Fair and Balanced Look at the Right
Autor/en: Al Franken

The #1 New York Times bestseller by Senator Al Franken, author of Giant of the Senate Al Franken, one of our "savviest satirists" (People), has been studying the rhetoric of the Right. He has listened to their cries of "slander," "bias," and even "treason." He has examined the GOP's policies of squandering our surplus, ravaging the environment, and alienating the rest of the world. He's even watched Fox News. A lot.
And, in this fair and balanced report, Al bravely and candidly exposes them all for what they are: liars. Lying, lying liars. Al destroys the liberal media bias myth by doing what his targets seem incapable of: getting his facts straight. Using the Right's own words against them, he takes on the pundits, the politicians, and the issues, in the most talked about book of the year.
Timely, provocative, unfailingly honest, and always funny, Lies sticks it to the most right-wing administration in memory, and to the right-wing media hacks who do its bidding.

A Note from the Author xiIntroduction xv1 Hummus 12 Ann Coulter: Nutcase 53 You Know Who I Don't Like? Ann Coulter 174 Liberals Who Hate America 215 Loving America the Al Franken Way 246 I Bitch-Slap Bernie Goldberg 287 The 2000 Presidential Election: How It Disproved the Hypothetical Liberal Media Paradigm Matrix 378 Conclusion: A Lesson Learned 519 Five Get-Rich-Quick Tips the Wall Street Fat Cats Don't Want You to Know 5210 Chapter for American Book by Kharap Juta 5611 I'm Funnier than Kharap Juta 5712 The Chapter on Fox 5813 Bill O'Reilly: Lying, Splotchy Bully 6514 Hannity and Comes 8315 The Blame-America's Ex-President-First Crowd 10416 Operation Ignore 11517 Our National Dialogue on Terrorism 12318 Humor in Uniform 12419 Who Created the Tone? 13220 Did the tone Change? 14221 Why Did Anyone Think It Would Change? 143 22 I Grow Discouraged About the Tone 15223 I'm Prudenized 16524 Paul Gigot Is Unable to Defend an Incredibly Stupid Wall Street Journal Editorial 17025 "This Was Not a Memorial to Paul Wellstone": A Case Study in Right-Wing Lies 17726 I Attend the White House Correspondents Dinner and Annoy Karl Rove, Richard Perle, Paul Wolfowitz, and the Entire Fox News Team 20627 The Lying Years 21728 Bush Can't Lose With Clinton's Military 22029 Operation Chickenhawk: Episode One 22630 Fun with Racism 25231 I'm a Bad Liar 26132 Thank God for Jerry Falwell 27733 Abstinence Heroes 28334 Abstinence Heroes II 28735 "By Far the Vast Majority of My Tax Cuts Go to Those at the Bottom" 28836 The Waitress and the Lawyer: A One-Act Play 30437 The Gospel of Supply Side Jesus 31338 I Challenge Rich Lowry to a Fight 32439 Vast Lagoons of Pig Feces: The Bush Environmental Record 32840 I Meet Former First Lady Barbara Bush and It Doesn't Go Well! 33641 My Personal Search for Weapons of Mass Destruction 34242 The No Child Left Behind Standardized Test 34943 What is a Lie? 352 Sources and Notes 355 Meet TeamFranken 369 Acknowledgments 373 Endnotes 379

U.S. Senator Al Franken grew up in St. Louis Park, Minnesota. Before running for the Senate, Al spent 37 years as an Emmy award-winning comedy writer; author of I'm Good Enough, I'm Smart Enough, and Doggone It, People Like Me!, Rush Limbaugh Is a Big Fat Idiot, Lies (and the Lying Liars Who Tell Them), and Giant of the Senate; and radio talk show host. He has taken part in seven USO tours, visiting our troops overseas in Germany, Bosnia, Kosovo, Uzbekistan, Iraq, Afghanistan, and Kuwait.

First elected to the Senate in 2008, and re-elected in 2014, he currently sits on the Health, Education, Labor, and Pensions (HELP) Committee; the Judiciary Committee; the Energy and Natural Resources Committee, and the Committee on Indian Affairs. He has been married to his wife, Franni, for 40 years.

Schreiben Sie eine Bewertung für: Lies: And the Lying Liars Who Tell Them: A Fair and Balanced Look at the Right