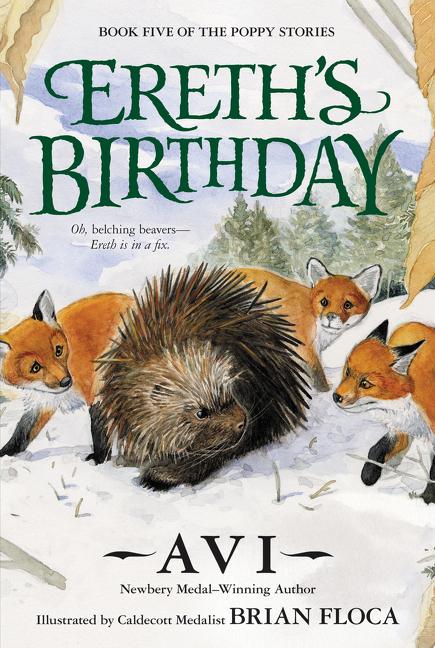 Erethizon Dorsatum-better known as Ereth, the self-centered, foul-tempered old porcupine-is having a birthday. And he fully expects his best friend Poppy, a deer mouse, to help him celebrate in a grand manner.

But Poppy has gone off somewhere with her husband, Rye, and it appears she has forgotten all about it. "Belching Beavers," says Ereth, "I am not angry!" (Though perhaps he is-and more than just a little.)Ereth knows his special occasion deserves a special treat-even if he has to get it for himself. And what treat could be more special than tasty salt? But the nearest salt is located deep in the forest, in a cabin occupied by fur hunters, who have set out traps to capture the Dimwood Forest animals.

In one of the traps, Ereth finds Leaper the Fox-who, with her dying breath, begs the prickly porcupine to take care of her three boisterous young kits, Tumble, Nimble, and Flip. "Jellied walrus warts!" Ereth exclaims, but reluctantly agrees.

Certainly this day is not going as he planned-and it's only just the beginning! Not only does Ereth suddenly have a rambunctious new family to take care of, but he's being stalked by Marty the Fisher, the one creature in Dimwood Forest who can do him harm.

And Bounder, the father of the three little foxes, remembers all too well the nose full of quills he got a while back from the grumpy old animal who now fancies himself the leader of the den. He too sets out to show Ereth who's boss.

Throw in an unexpected snowstorm, and all in all, it adds up to one birthday Ereth the porcupine is never going to forget, not even if he lives to be a hundred and twenty-two!

Avi is the award-winning author of more than eighty-two books for young readers, ranging from animal fantasy to gripping historical fiction, picture books to young adult novels. Crispin: The Cross of Lead won the Newbery Medal, and The True Confessions of Charlotte Doyle and Nothing But the Truth were awarded Newbery Honors. He is also the author of the popular Poppy series. Avi lives in Denver, Colorado. Visit him online at www.avi-writer.com.