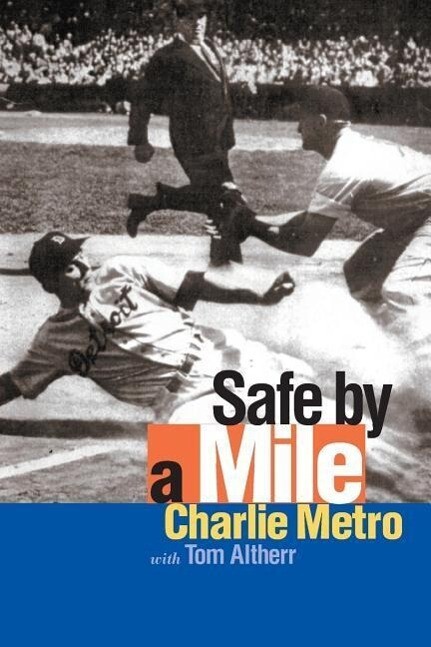 Safe by a Mile

Charlie Metro's career runs the gamut of the specialties found in baseball-player, coach, manager, scout, inventor. Metro has lived baseball at every level from the Great Depression to today's multimillion dollar contracts. One of a kind, Metro's life mirrors the astounding changes in the game as well as in the nation. Metro's tale is full of heart and a wealth of anecdotes, the result of a fascinating life and a true love of the game.
Charlie Metro was born Charles Moreskonich in Nanty-Glo, Pennsylvania, in 1919. He played in the major leagues from 1943 to 1945 with the Detroit Tigers and the Philadelphia Athletics. He managed for parts of two seasons, with the 1962 Cubs and the 1970 Kansas City Royals. He also coached the 1965 Chicago White Sox and the 1982 Oakland Athletics. Although he had far longer service in the minor leagues, he will probably be best remembered as one of the great scouts and teachers in baseball history.

List of Illustrations; Acknowledgments; Introduction; 1 Hookey from High School; 2 The Big Leagues Were a Long Way Off; 3 Up with Detroit and Philadelphia; 4 Go West, Young Man; 5 Points South; 6 The Road Back to Triple-A; 7 Mile High, Here We Come; 8 A Car Missing a Wheel; 9 Scouting, the Toughest Job in Baseball; 10 Putting All the King's Men Together; 11 If This Is Tuesday, It Must Be Albuquerque; 12 Billy Ball; 13 Retirement? What Retirement?; 14 My Own Hall of Fame; 15 I Dream of Baseball; Appendix: Career Statistics; Index

Tom Altherr is a professor of history at the Metropolitan State College of Denver. He is a coauthor of "Sports in North America: A Documentary History."

"Metro's career saved him from the coal mines of western Pennsylvania and afforded him the chance to play, then manage, in dozens of venues throughout the country... With a cast that includes such varied personalities as Billy Martin, Richard Nixon, Lou Piniella and Dorothy Lamour, Safe by a Mile is a wide-ranging tale by one of baseball's happiest wanderers." - USA Today Baseball Weekly