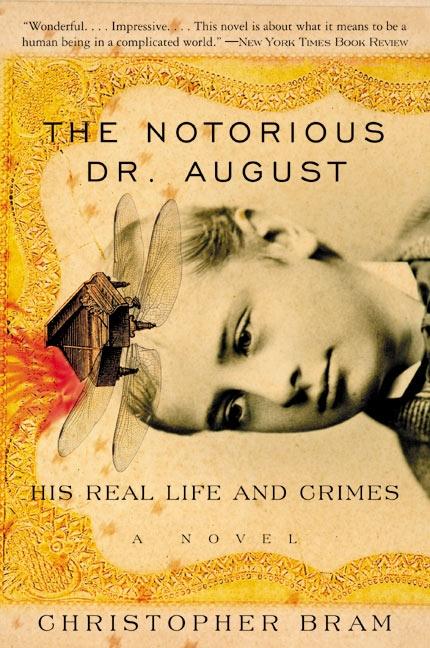 The Notorious Dr. August: His Real Life and Crimes

Christopher Bram tells the story of Augustus Fitzwilliam Boyd, alias Dr. August, a clairvoyant pianist who communes with ghosts, and who finds meaning in his life through a strange love triangle with a righteous ex-slave and nervous white governess. Spanning the years between the Civil War and the early 1920's, this riveting and ambitious historical novel displays the immense talents of a prodigious, highly esteemed author working at the height of his powers.

Christopher Bram is the author of eight other novels, including Gods and Monsters (originally titled Father of Frankenstein), which was made into an Academy Award-winning film. Bram was a 2001 Guggenheim Fellow and received the 2003 Bill Whitehead Award for Lifetime Achievement. He lives in New York City.

"A great American novel. "The Notorious Dr. August is a sweeping chronicle . . . It is a delicious, poignant, funny and beautifully written social fiction. . . . This is the mark of an accomplished novelist working at full strength. Bram embraces the contradictions of humanity and makes the improbable probable, the unlikely likely, the unexpected somehow expected. Most of all, he makes us think, reassessing his characters, rethinking our expectations, reevaluating our values. . . it is exhilarating."The Philadelphia Inquirer"

"What an original and readable book. I finished it in one fell swoop. A musician like myself can sometimes squirm at depictions of other musicians in fiction, but every word of Bram rings true."Ned Rorem"

"A true epic and Bram's most ambitious work yet, examining love, sex, race and the meaning of art in spectacularly entertaining detail."The Washington Post Book World"

"[A] sinfully pleasurably book . . . It's a testament to Bram's powers of imagination and restraint that Dr. August will carry you swiftly from beginning to end . . . The real achievement of this book is to remind us of the sheer joy of story. . . . As much as the characters and events, the magnificent light shed on the novel's span of years is a major source of its pleasure. It's hard to imagine anyone more skilled at making us inhabit the historical moment. Bram captures its colors andsounds, textures and tastes, fads and morals with piercing, imaginative precision. . . . the prose masterful throughout. . . . it all comes together for Bram, a virtuoso who uses the conventions of dramatists from Shakespeare to vaudeville to hold readers in thrall for every last word. San Francisco Chronicle

"Those who appreciated last year's Oscar-nominated movie "Gods and Monsters will find plenty to amuse them in the latest quirky product of Christopher Bram's imagination . . . Bram's descriptions . . . are right on target. "Entertainment Weekly"

"A great American novel. "The Notorious Dr. August is a sweeping chronicle . . . It is a delicious, poignant, funny and beautifully written social fiction. . . . This is the mark of an accomplished novelist working at full strength. Bram embraces the contradictions of humanity and makes the improbable probable, the unlikely likely, the unexpected somehow expected. Most of all, he makes us think, reassessing his characters, rethinking our expectations, reevaluating our values. . . . it is exhilarating."--"The Philadelphia Inquirer

"Sex and soul animate this ingenious historical novel . . . It's an old sweet songof the uncanny, deftly and lovingly played."--"Out magazine

"Discovering Christopher Bram is like discovering one of the great old-fashioned storytellers . . . The historical elements are beautifully imagined . . . But the intensity of the love and hate that Bram's unlikely trio of protagonists feel for one another is what gives the book its power. This is, quite simple, storytelling at its best."The Advocate"

"A deeply felt novel about the 'crimes' of love?From the battlefields of the South to the spas of Europe to the fiery destruction of Coney Island, Bram conjures up a historical world true to itself, one that lingers in the mind like the final strains of an unforgettable symphony."Kirkus Reviews, starred review"

"A complex and compelling read?[a] thought-provoking exploration of the human soul."Library Journal<"

"Mr. Bram is utterly in command of his material throughout. His main characters August and Isaac in particular are so well-rounded, so complicated, so very human . .."Lambda Book Report"

"An astonishing act of historical mimesis . . . "The James White Review"

"A detailed often humorous story with complex characters who evolve with the times they live in."IN Los Angeles"

"Wonderful . . . Impressive . . . The novel is about what it means to be a human being in a complicated world."The New York Times Bbook Review""