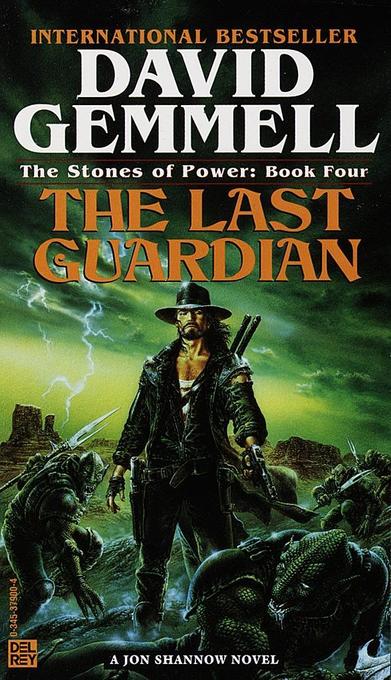 While the Earth quaked, a deadly power burst forth from ancient Atlantis. For the gate of time had been torn open, … weiterlesen

While the Earth quaked, a deadly power burst forth from ancient Atlantis. For the gate of time had been torn open, freeing a cataclysmic evil.

Only the last guardian, Jon Shannow, the legendary pistoleer, could shut the deadly portal. But to accomplish this he would have to find the shining Sword of God, said to be floating among the clouds in the perilous lands beyond the wall, where beasts walked like men and worship a dark goddess. As Shannow embarked on his impossible quest, demons gathered in wait.

David Gemmell was born in London, England, in the summer of 1948. Expelled from school at sixteen for organizing a gambling syndicate, he became a laborer by day, and at night his six-foot-four-inch, 230-pound frame allowed him to earn extra money as a bouncer working nightclubs in Soho.

Born with a silver tongue, Gemmell rarely needed to bounce customers, relying on his gift of gab to talk his way out of trouble. At eighteen this gift led to a job as a trainee journalist, and he eventually worked as a freelancer for the London Daily Mail, Daily Mirror, and Daily Express. His first novel, Legend, was published in 1984 and has remained in print ever since. He became a full-time writer in 1986. David lives with wife, Valerie, and his two children, Kate and Luke, in Hasting, England.