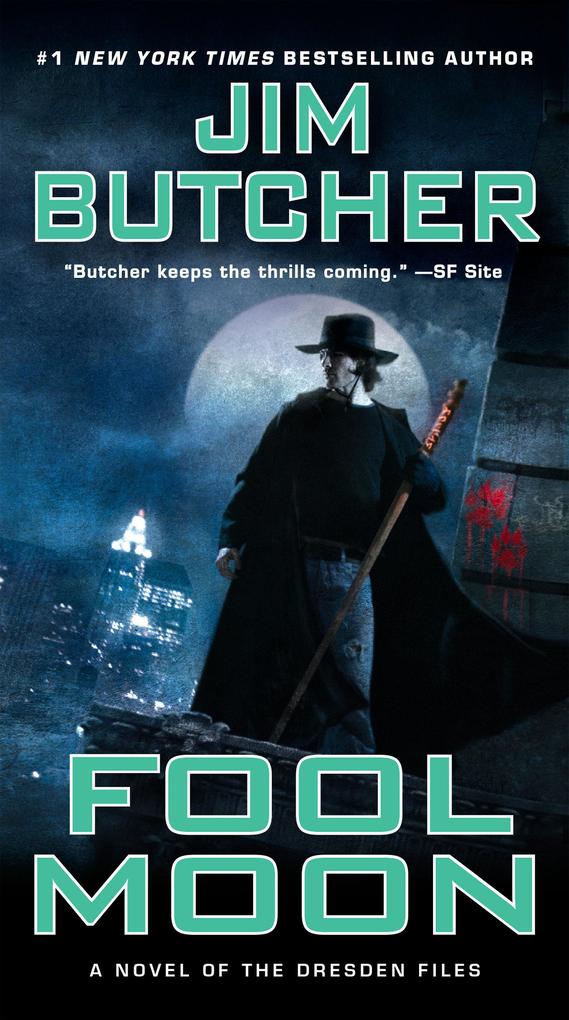 "One of the most enjoyable marriages of the fantasy and mystery genres on the shelves,"(Cinescape) the Dresden Files have become synonymous with action-packed urban fantasy and nonstop fun. Fool Moon continues the adventures of Jim Butcher's most famous-and infamous-reluctant hero...

You'd think there'd be a little more action for the only professional wizard listed in the Chicago phone book. But lately, Harry Dresden hasn't been able to dredge up any kind of work: magical, mundane, or menial.

Just when it looks like he can't afford his next meal, a murder comes along that requires his particular brand of supernatural expertise. There's a brutally mutilated corpse, and monstrous animal markings at the scene. Not to mention that the killing took place on the night of a full moon. Harry knows exactly where this case is headed. Take three guesses-and the first two don't count...

A martial arts enthusiast whose résumé includes a long list of skills rendered obsolete at least two hundred years ago, #1 New York Times bestselling author Jim Butcher turned to writing as a career because anything else probably would have driven him insane. He lives mostly inside his own head so that he can write down the conversation of his imaginary friends, but his head can generally be found in Independence, Missouri. Jim is the author of the Dresden Files, the Codex Alera novels, and the Cinder Spires series, which began with The Aeronaut's Windlass.

Praise for the Dresden Files

"One of the most enjoyable marriages of the fantasy and mystery genres on the shelves."-Cinescape

"Butcher...spins an excellent noirish detective yarn in a well-crafted, supernaturally-charged setting. The supporting cast is again fantastic, and Harry's wit continues to fly in the face of a peril-fraught plot."-Booklist (starred review)

"What's not to like about this series?...It takes the best elements of urban fantasy, mixes it with some good old-fashioned noir mystery, tosses in a dash of romance and a lot of high-octane action, shakes, stirs, and serves."-SF Site

"A tricky plot complete with against-the-clock pacing, firefights, explosions, and plenty of magic. Longtime series fans as well as newcomers drawn by the SciFi Channel's TV series based on the novels should find this supernatural mystery a real winner."-Library Journal

"What would you get if you crossed Spenser with Merlin? Probably you would come up with someone very like Harry Dresden, wizard, tough guy and star of [the Dresden Files]."-The Washington Times
Kunden, die diesen Artikel gekauft haben, kauften auch