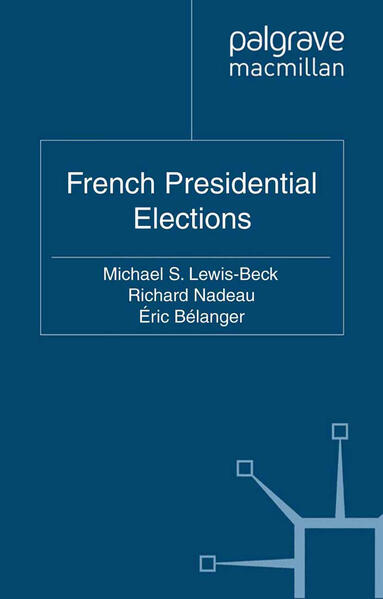 An original and comprehensive study of the sociological and psychological forces driving individual choices in French Presidential elections. Based on a unique comparative analysis of four French presidential contests over the last two decades, this book presents a rigorous examination of long-term and short-term voter motivations.

MICHAEL S. LEWIS-BECK is F. Wendell Miller Distinguished Professor of Political Science at the University of Iowa, USA. His interests are comparative elections, forecasting, political economy and quantitative methodology. He has authored or co-authored over 180 articles and books, including American Voter Revisited, Forecasting Elections, Economics and Elections: The Major Western Democracies, The French Voter: Before and After the 2002 Elections and Applied Regression: An Introduction.

RICHARD NADEAU is Professor of Political Science at the University of Montreal, Canada. His interests are voting behaviour, public opinion, political communication and quantitative methodology. A Fulbright Scholar and a former chief advisor to the Prime Minister of Quebec, he has authored or co-authored over 120 articles, chapters and books including Unsteady State, The Anatomy of a Liberal Victory, Citizens and Le Comportement Électoral des Québécois.

ÉRIC BÉLANGER is Associate Professor of Political Science at McGill University, USA. His research interests include Quebec and Canadian Politics, political parties and party systems, public opinion and voting behaviour. His research has been published in numerous scholarly journals. He is also the co-author of Le Comportement Électoral des Québécois.

"Like all good scientific works, French Presidential Elections answers important existing questions and poses new ones...Lewis-Beck, Nadeau and Bélanger have given us a most useful roadmap that will guide future inquiries. The result of their efforts is an outstanding example of the contemporary science of electoral choice."

-From the Foreword by Harold D. Clarke, Ashbel Smith Professor, School of Economic, Political and Policy Sciences, University of Texas at Dallas, USA

"A superbly crafted inquiry of French elections from Mitterand to Sarkozy, with an uncanny sense for enduring as well as novel patterns of voting. Mindful of the peculiarities of la vie francaise, but also appealing for its broad theoretical outlook on electoral choice."

Taschenbuch
The End of the French Exception?